What We Do in the Shadows 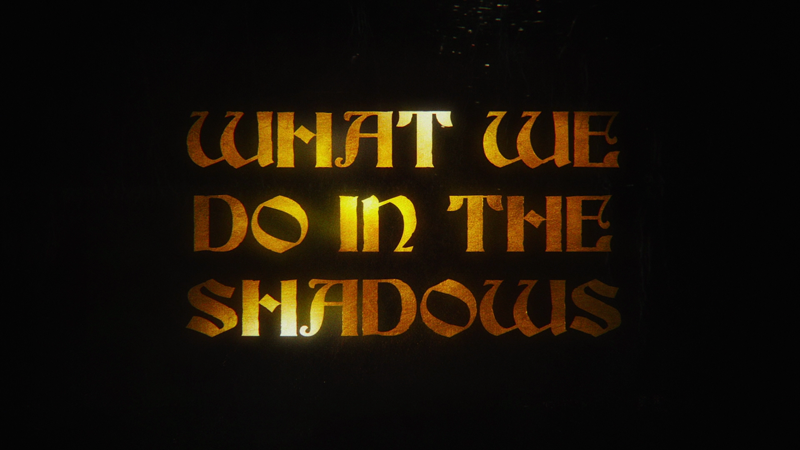 
The Movie
A while back, watching an episode of @midnight, I was excited to see Jemaine Clement, one of the great stars of Flight of the Conchords, but I didn't know Taika Waititi, the man standing next to him. Over the course of the episode though, he revealed himself to be quite funny and later I found out he had been the director of an excellent short film I had seen, Two Cars, One Night, his first professional effort, and the quirky Eagle vs. Shark. The pair was on the show to promote their latest project, a vampire comedy, which naturally put it on my radar. Now it's arrived on Blu-ray and it's live up to the promise of its pedigree, offering a mockumentary worthy to sit alongside the best of Christopher Guest's work.

The main subjects are a trio of vampires living together in New Zealand, dandy Viago (Waititi), Romanian Vlad (Clement) and insecure Deacon (Jonathan Brugh.) (A fourth, the Nosferatu-esque Petyr, lives in the basement and generally creeps people out.) A crew of centuries-old vampires living in the modern day, they have their difficulties in life, but as long as they can find new blood to keep them going, they'll be fine. That is, until Nick (Cori Gonzales-Macuer) enters their lives (along with his very average friend Stu.) Made undead by Petyr, he quickly becomes a nuisance, unable to keep their vampiric nature a secret and creating strife with Deacon. It all leads to trouble at the Unholy Masquerade, the big local undead social event. 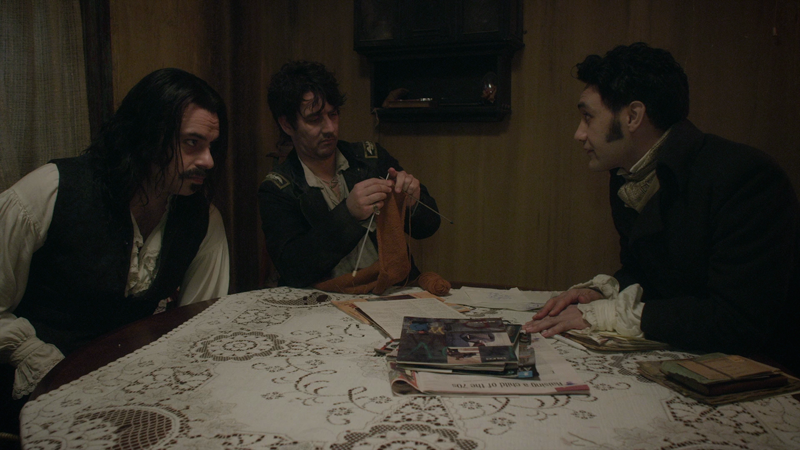 The film, which does a great job of applying the mockumentary standards to an unusual world (and not ignoring that there's a camera crew involved), has a great deal of fun with the traditional vampire tropes, and masterfully adapts them for the modern day, like when the requirement that vampires be invited before entering a location conflicts with their desire to get into a nightclub. If there's an element of the lore you know, there's a good chance it's covered here, and made very funny, without falling to Scary Movie-levels of simplicity or inanity. Even the more modern concept that vampires and werewolves are enemies is sent up in this movie, with the hairy bunch led by another FOTC alum, Rhys Darby, which results in real laughs as they attempt to practice self-control and manage their transformations. The true magic though is when the bloodsuckers come come face-to-face with modern society, as seen when they learn about the Internet, easily the funniest segment of the film.

Though it's certainly fun to follow these guys around as they live the lives of modern vampires, share their life stories and face the usual day-to-day struggles (amplified by a thirst for blood), it's the guys playing the vampires that make What We Do in the Shadows so wonderful. Clement is as wonderfully dry and, at times, adorable, as he's ever been, playing the dark vampire bit to the hilt, but with his laid-back persona just beneath the surface, while Watiti made his sweet, slightly naive Viago into the nicest nice-guy ever to bleed out a date through a bite to the neck (an over-the-top scene that could only work with the character Watiti establishes.) Nick and Deacon (as well as Stu and Deacon's familiar Jackie) all do a fine job, but without Clement and Waititi setting the tone, the film wouldn't have that ironic liveliness and a general sense of lightness that lends reality to the fantasy world. When Clement makes a ridiculous off-hand remark, it doesn't take you out of the world. It's just another opportunity to laugh. 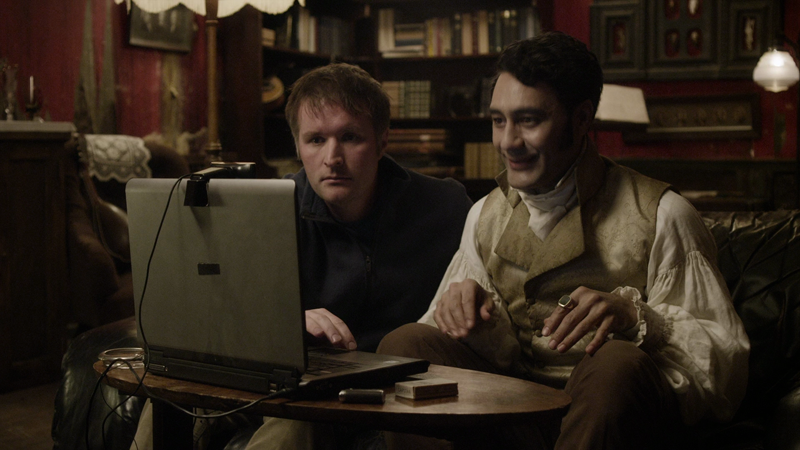 The Disc
The film arrives on a single Blu-Ray disc, which is in a standard Blu-Ray keepcase. The disc offers a static menu that adapts the cover art, with options to watch the film, select scenes, adjust the set-up and check out the extras. There are no audio options, but subtitles are available in English and English SDH.

The Quality
Though it kicks off with the promise of a lo-fi experience through the use of a fake production credit, this 1080p, AVC-encoded transfer looks solid throughout, whether it's presenting an atmospheric interview in the vampires' home or a dim camera-lit chase a la The Blair Witch Project. There's a lot of dark nighttime footage in this film about vampires (natch) and the transfer sports the fine detail, deep black levels and appropriate color necessary to get across what's happening clearly, though you'll find a some low-light produced noise in spots. The color in particular is eye-catching, and is a key to capture the film's look, what with the copious blood, well-designed settings and excellent costumes. Digital distractions are not a concern.

Though this is a mockumentary, no one told the DTS-HD Master Audio 5.1 track, as it doesn't treat the film any different that your usual film, blending the clear center-channel dialogue (the lifeblood of any documentary) with strong music tracks (both diegetic and non-), impressive atmospheric elements (the doc crew had a great sound guy is seems) and good sound effects to establish this real-world vampire setting. One scene in particular, involving Petyr, is striking in its use of off-screen sound, before transferring to on-screen to really drive home the feeling.

The Extras
A feature-length commentary by Clement and Watiti offers plenty of insight into the making of the film, with info on how they fooled the actor playing Stu into playing the part, the power of mascara, post-credit sequences and the original short film. The friendship between the two is the key to the laid-back tone, which turns the track into an entertaining and relaxed listen. Points deducted for the tired "Is anyone even listening?" comments. Yes we are.

Deleted scenes are next, with 12 entries, running a combined 31:33. Among the highlights are the vampires' attempts to get invited into a nightclub, more on how the group learns the Internet, a deleted subplot about Nick's efforts to create more vampires, and a funny discussion of past relationships. Considering they shot over 100 hours of footage for the film, there's way more out there, but this is probably the best of the best.

An oddly-titled section, Video Extras, runs 50:06, and features nine disparate elements, most important among them being the original 2005 short film this movie was based on, Things We Do in the Shadows: Some Interviews with Some Vampires (27:24). It's interesting to see what carried over to the feature-length version, but it's way more interesting to see the homophobic reaction the cast (in costume) got on the streets of Wellington only 10 years ago. Other pieces here include an extended look at Deacon's erotic dancing (3:15), Viago singing (2:33), Vlad painting (1:41) and reading his poetry (1:10), two scenes with Deacon's familiar (5:03 & 3:59), a 3:36 look at what Stu does for a living and a silly dance scene (3:59) with the vampires and werewolves you're unlikely to forget any time soon. It could be argued that much of this is actually deleted footage and belongs there, but all that's really important is the presence of the original short.

There's a selection of six interviews shot for the film (running a total of 18:35), featuring chats with Deacon, Viago, Vlad, the police, the werewolves and a zombie. The sit-downs with Viago (who talks about his ability to change forms) and the zombie, who decries the status of zombies in the undead culture, are easily the best, but getting more from Darby isn't bad either.

Six promo videos (6:39 in all) repurpose footage from the film adding it to clips that aren't seen elsewhere to create some minute-long ads for the film, focusing on hobbies, hypnosis, werewolves and going out on the town. Fun stuff, but you've seen most of it elsewhere.

The extras wrap up with a manual poster gallery featuring 50 pieces of art. These aren't official posters though. These are some of the entries to a poster-creation Facebook contest. There's some gorgeous work in here, and it gives you a chance to play "who's the influence?" 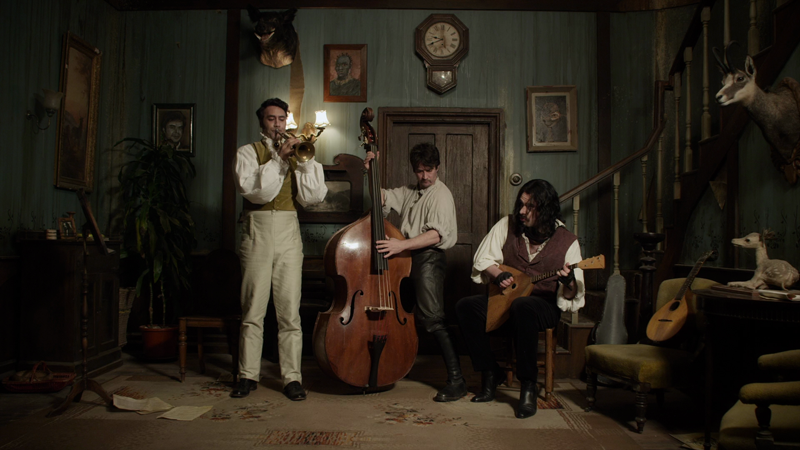 The Bottom Line
What We Do in the Shadows is a delightful surprise, an expertly-crafted mockumentary that combines a loving perspective on vampire legends with fun, deadpan comedy to create a feel-good movie about slaughterers of men, driven by two utterly-embraceable leads. The disc looks and sounds quite nice, and sports a nice array of bonus content that strikes a decent balance between promotional and informative. This is a no-brainer for fans of Flight of the Conchords, but anyone who likes some laughs in their fangs will have a good time here.