Nightmare Castle (plus Castle of Blood & Terror-Creatures from the Grave)

Severin // Unrated // August 18, 2015 // Region 0
List Price: $29.98 [Buy now and save at Amazon]
Review by Stuart Galbraith IV | posted September 10, 2015 | E-mail the Author
Severin Films has put together a wonderful package of high-def material starring Barbara Steele (b. 1937), the "Queen of Horror." Nightmare Castle is really three films for the price of one - not to mention the scads of supplementary features. For Euro-horror film fans, this is a major release.

Watching them back-to-back, I found them about equally good. None can touch the pictorial beauty of the horror films of compatriot Mario Bava, who made Steele a horror icon with his Black Sunday (1960), but despite their obviously low budgets (use of pre-existing locations, small casts, etc.) each film has its moments, and all feature set pieces with wonderfully moody black-and-white cinematography, imagery far better appreciated in high-definition than the smeary public domain versions commonplace back in the 1990s.

Nightmare Castle may have been chosen as Severin's headliner because it features Steele in a showy dual role, or perhaps because it features a score (not very good, sorry to say) by the great Ennio Morricone. Or maybe accessing that film's original camera negative was the easiest of the three. Regardless, all three pictures are worthwhile. 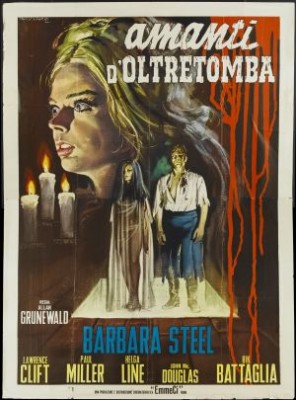 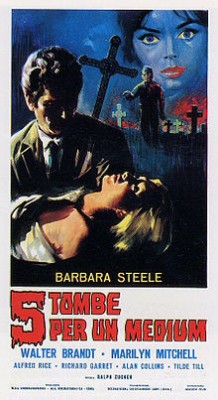 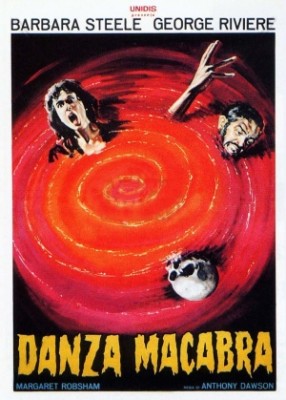 Nightmare Castle first finds Steele in the role of Muriel, the adulteress wife of mad scientist Stephen Arrowsmith (Paul Muller) who is experimenting with blood regeneration on Solange (Helga Liné, Horror Express' femme fatale), a duplicitous crone of a servant (in unconvincing makeup). Arrowsmith discovers Muriel in the greenhouse with her lover, strapping gardener David (Rik Battaglia), and tortures both to death, disfiguring David with a hot poker and Muriel's face with acid.

Muriel's virginal but emotionally fragile sister, Jenny (also Steele, sporting a blonde wig that can't entirely hide her long brunette hair), is to take possession of the large estate, but a scheming Arrowsmith quickly marries her ahead of her arrival, planning to have her committed ASAP. Solange, meanwhile, has successfully been transformed into a strikingly beautiful woman. Arrowsmith calls on a doctor, Derek Joyce (Marino Masé), hoping to speed up Jenny's commitment to a mental institution, but he falls in love with her while at the same time gradually confirming her claims that the angry spirits of Muriel and David are haunting the castle.

Shot in just 18 days at the 17th century Villa Parisi, once the summer residence of Napoleon's younger sister, Nightmare Castle is egregiously overlong at 104 minutes with long stretches of time-killing - usually with the camera focused on Steele's unique beauty - between its atmospheric set pieces and lively, imaginative climax, but it's not bad overall. Director Caiano reportedly conceived the project with Steele in mind, whom he greatly admired, though he claimed not to have seen any of Bava's films beyond Black Sunday. Steele gets to play the prim and proper ingénue as well as bad girl Muriel, a slight variation of the kinds of horror roles she usually landed in these continental productions.

Among them is Elizabeth Blackwood, sympathetic to Foster's plight, played by top-billed Steele, though it's really more a supporting if colorful part.

In Terror-Creatures from the Grave, Steele plays Cleo, the scheming young widow of a wealthy man whose spirit seems to be summoning up the dead, plague victims, resting uneasily in the graveyard of his particular castle. Walter Brandi and Mirella Maravidi co-star as the late man's estate attorney and adult daughter. Again, it's not great but is generally well made for its budget level and boasts several impressively eerie set pieces and an interesting Riz Ortolani (Mondo Cane) score, plus decent direction from Margheriti, better known in the U.S. for his cheap Italian sci-fi spectacles.

All three features look very good. Nightmare Castle is the most pristine, though even it has some major tear damage at one point. It's been sourced from the original camera negative but, truth be told, the other two features also are in decent enough shape, despite more speckling, minor jump cuts and the like. On my 90-inch screen all came awfully close to capturing the look of projected 35mm film. All are English-dubbed only, with no Italian or other audio options, and no subtitles, though the disc is region-free. The pictures and all the extras don't seem to have compromised the bit-rate count to any noticeable-to-the-naked-eye degree.

Bountiful supplements include an audio commentary with Steele, cozily moderated by David Del Valle. There's a 17-minute gap that wasn't intentional: they had been informed that Steele's co-star, Paul Muller had died, and spent 17-minutes-worth of commentary time discussing his passing, only to learn later that his death was yet another - sigh - Internet-generated hoax. The rest of the track, however, is quite delightful, as is Steele's on-camera featurette, "Barbara Steele in Conversation."

Also included are featurettes with director Mario Caiamo and one each on Castle of Blood and Terror-Creatures from the Grave, trailers for all three films, and even a few deleted scenes.

Though lesser Euro-horror titles, despite Barbara Steele's always interesting presence, Nightmare Castle and its two co-features are a steal of another kind; very enjoyable and most attractively packaged. Highly Recommended.