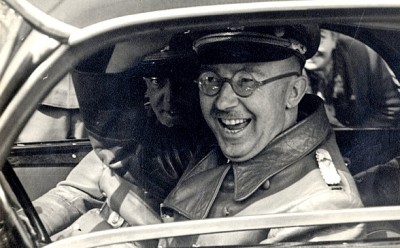 The Decent One juxtaposes archival footage of Nazi atrocities with the personal letters of Heinrich Himmler, architect of the Nazis' "Final Solution," and tries to put a human face on one of the most evil people of the 20th century, for reasons that the film never explains or develops. Aside from showing the banality of everyday evil, the film's methods prove to have no meaningful effect when it comes to exploring the deeds of Himmler or the Nazis generally. However, as a documentary, the film is still effective in showing that even people who strive to be good family members, members of their community, and followers of their society's beliefs, are capable of doing horrible things. The film tries to shock us by setting the deeds of the Nazis next to moments from Himmler's life, but such a personalized view of Germany's role during World War II offers no new insights about the war, nor does it say anything new about the horrifying things that humans are capable of. Are we simply to believe that people from all walks of life are capable of doing terrible things? The Decent One is a kind of morbid family album set in motion by archival footage and normal family moments peppered with the kinds of antisemitism and justifications for murder that we would expect from any Nazi.

The Decent One does not offer much beyond its surface, but it is still fascinating and engaging for glimpses into Himmler's life. Himmler was a German nationalist his entire life. As indicated by all of the letters read by voice actors in the early part of the film, Himmler's hatred towards Jews and his expression of Germany's sense of victimhood after their defeat in World War I fomented most of the resentment that drove him to ignite the Nationalist Socialist party with Hitler and other leading Nazis. Amid this background, we are shown photos of Himmler's family, affectionate letters from his parents are read in voiceover, and we understand their sense of awe at their son's position within the then-burgeoning Nazi movement. The Nazis' grip around Germany and its neighboring countries develop alongside his marriage and his growing family. In order to propagate the mythical Aryan race, they adopt a young boy who will, at the age of 15, be drafted into the German army in the waning, desperate days of the War. Letters from the Himmler family's daughter are also read, and she was mostly oblivious to the Nazi horrors that her father facilitated.

The Decent One is told entirely with archival footage and still photographs that once belonged to the Himmler family. The film plays like a slightly demented, darker version of a Ken Burns film. Faux-documentarian Errol Morris makes an appearance in the special features, but The Decent One lacks the oddball nuances of his films. The juxtaposition between the banalities of family life and the atrociousness of the Nazis offer almost no tension between each other when these two elements of the film are placed side-by-side.

Nonetheless, The Decent One is a good film, and is one of the few movies in recent memory that makes an honest attempt to make evil people far more sinister when the crimes they commit are set against the events of their everyday lives.

The Decent One's major shortcoming is that it offers no insight into the reasons people do unspeakably cruel things to others. A far more brilliant study of everyday cruelty and the banality of evil men can be found in Jay Rosenblatt's 1998 Human Remains, a found-footage experimental film that recounted the mundane likes and dislikes of some of the 20th century's dictators, including Adolph Hitler, who, through an actor's voiceover in German, professes his love for movies. That film was chilling for the way it showed that, despite the proclivities
people like Hitler shared with the rest of us, his evil nature could never make him human enough. The Decent One's use of nicely restored archival footage and the Ken Burns Slow Zoom into still photos is like a straitlaced version of Rosenblatt's work, and it doesn't challenge its viewer to think about the reasons people can be so evil.

Video:
The film was shot with a 1.85:1 aspect ratio, and the DVD has been enhanced for 16X9 TVs. It is also filled with archival footage spanning the 1920s through World War II, which has been nicely remastered and is well integrated into the overall work, along with the archival still photos.

Audio:
The DVD has a 5.1 Surround soundtrack that place nicely on multi-speaker systems. Over the otherwise silent archival footage, Foley sound effects, such as foot steps, doors closing, cars driving, etc., have been added. But these additions actually take away from the ominous effect that silent footage may have added to the film. The additional sound imposed over the silent footage draws too much attention to itself. The film is spoken in German, with enhanced English subtitles.

There are a number of extras on the disc, including an introduction by Errol Morris, but these additional features do little to help enhance the viewing of the film. Additionally, there is a Making-Of that highlights the resources that went into making The Decent One, which may make you appreciate all of the work that goes into making a film told entirely through archival material. It's an archivist's dream, in this way, especially in one featurette called Researching The Decent One.

Regardless of the little we learn about the reasons people can be evil, the film is interesting for the small glimpses into Himmler's life. Watch Human Remains instead.