Audiences usually associate stories told from the point of view of animals with family entertainment. As soon as we hear about a film where the main character is an animal, our minds immediately go to "Disney", "animated", "family film", "kid's stuff". We forget the fact that animals can also be used to tell adult stories with complicated themes, brutal honesty, and powerful symbolism. There are examples of this approach in the literary world, the most famous of them being George Orwell's Animal Farm, although film adaptations leave much to be desired (The 1954 animated version comes closest). 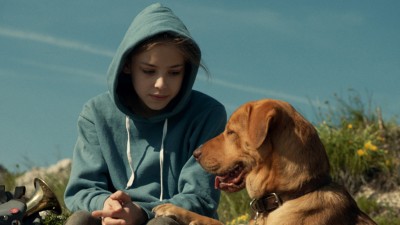 In my opinion, the best film that uses animals to tell an adult story is Martin Rosen's adaptation of Richard Adams' The Plague Dogs. A vastly underrated animated masterpiece, The Plague Dogs used its Homeward Bound-type Disney premise of two dogs on the run from evil scientists to tell a profoundly moving and unflinching story about animal cruelty and death as a universal concept.

In a way, White God works as the live action counterpart to The Plague Dogs, and uses its premise about a dog living through an array of violent behavior in order to get back to his owner to not only create an angry and honest look at animal cruelty, but to cleverly insert symbolism regarding racism and jingoism. It's a near masterpiece from Hungary, vibrant, unpredictable, moving, a film that dares to experiment with wildly shifting tones while somehow managing to stay loyal to its themes throughout.

The story is very simplistic on the surface, it sounds like the premise of a Benji reboot: A dog named Hagen is abandoned by the father of his owner, a socially-awkward teenaged girl named Lili (Zsofia Psotta), and travels through the hostile streets of Budapest in order to get back to her. Co-writer and director Kornel Mundruczo executes this premise as an allegory on human cruelty, and explores how the cruel ways we treat other living beings can turn around and bite us in the ass, literally, in the case of White God.

The film's racism subtext is the most obvious, so let's dive into that first. From the first couple of minutes, Mundruczo lets us know that a mixed-breed dog like Hagen is not welcome in Hungarian community. After Lili's neighbor lies about being bitten by Hagen, perhaps because she's prejudiced against mixed-breed dogs, the police asks Lili's father to pay for a special tax for "mutts", which leads to the father abandoning the dog. Lili plays the trumpet in an orchestra, and later in the film her conductor makes her give a speech about the superiority of pure-breed dogs as Lili apologizes for bringing Hagen to practice. The fact that those anti-mutt talking points sound like Nazi propaganda from the late 30s is probably not an accident.

Mundruczo takes that theme further by examining that monstrous behavior fueled by prejudice can lead to more despicable actions by those who were bullied and disenfranchised. When a dog fighter gets his hands on Hagen and puts him through despicable methods to turn him into a more aggressive animal (I have to commend the filmmakers for not flinching away from showing the true brutality of training dogs for such a barbaric "sport"), we're supposed to blindly hate the dog fighter. But then, we realize that he's a gypsy, an undesirable in Hungarian community, a man who's constantly treated like a third-class citizen. In many ways, the trainer is the human equivalent of Hagen, and his treatment of the dog mirrors Hagen's horrible actions once he gets loose. Violence begets violence.

Hagen's harsh journey leads to a semi-supernatural third act that deserves respect for its willingness to completely shift tones into an almost horror territory. Yes, all trailers, posters, and even the film's unnecessary cold open shows images from the breathtaking third act of the film, but I'd still rather you experience it for yourself. The only two points I'm going to bring up are that I'm delighted to see an original take on 1970s exploitation classic Dogs, and that the film perfectly uses the music and more importantly the themes of Wagner's Tannhauser in order to deliver a haunting and beautiful climax. If the ending confused you, I suggest looking up the story of Tannhauser. 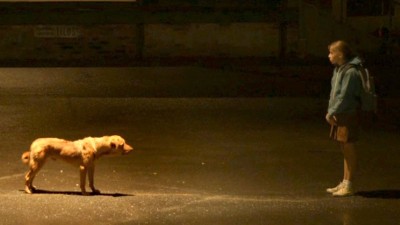 White God's realistic depiction on Budapest, at least until we get to the dark fairy tale ending, is perfectly captured in this 1080p transfer. Mundruczo has an eye for the grimier parts of the city, full of bleak colors. Once the more stylized slow-motion shots of the astounding finale comes around, the colors are vibrant and the video presentation show a lot of depth.

The main reason to hook up White God's DTS-HD 5.1 track to your sound system is to fully enjoy Asher Goldschmidt's gorgeous and boisterous score, which gives the film an operatic quality. The dialogue and sfx are heard clearly, but this track shines whenever the score envelops all channels.

Behind the Scenes: This is a 17-minute featurette that mostly focuses on how the huge amount of rescue dogs were trained for the film. If you're traumatized by White God's third act, watching the same dogs play around and having fun might make you feel better.

Interview with The Director: This is a 15-minute interview where Mundruczo talks about the film's inception and the challenging production process.

Interview with Animal Coordinator: Teresa Ann Miller, the animal trainer for the film, talks briefly about how the two dogs playing Hagen were found and how all the dogs were trained.

We also get a Trailer and some Previews from Magnolia.

With its shifting tones and the way it uses an otherwise family friendly premise to tell a complex story about the human condition, White God might rub some viewers the wrong way. That being said, it's also one of the most original, daring, and downright beautiful films of last year.