Diary of a Lost Girl

Louise Brooks gets into a heap of trouble in Diary of a Lost Girl, which followed the magnificent Pandora's Box as the second collaboration between the bobbed-haired silent star and German director G. W. Pabst. With this operatic 1929 drama, Pabst and Brooks practically seem to be saying, "You think that was tawdry and over-the-top? We'll show you tawdry and over-the-top." Although never approaching the squalid heights of Pandora's Box, Diary of a Lost Girl nevertheless looks more ravishing than ever on the newly restored version presented on Kino Classics' Blu-ray.

Among silent movie buffs, Louise Brooks has held the odd position of being far more prominent today than she ever was in her heyday. Made when the actress ditched Hollywood for the meatier opportunities of Europe, Diary of a Lost Girl demonstrates why she's survived where other, bigger names have faded. As Thymiane, a rich girl who falls into destitution, she offers not just a radiant, earthy screen presence, but the kind of innate intelligence that the cardboard-thin parts offered up to her in Hollywood couldn't capture.

Brooks' Thymiane is another good-girl-gone-bad, similar to the hedonistic jazz baby she portrayed in Pandora's Box, although this particular effort offers her character a better shot at redemption than the doomed, unabashedly sexual creature who surrendered herself to Jack The Ripper in that 1928 film. Here, she's the teenaged daughter of a wealthy pharmacist in a contemporary German metropolis, preparing for her confirmation. The action begins with Thymaine's father, Karl Friedrich Henning (Josef Rovensky), letting the family housekeeper go after hearing that she's pregnant. The fired girl then drowns herself, which makes Thymiane concerned for the purity of the replacement housekeeper, Meta (Franziska Kinz). Instead, it's Thymiane herself who is violated, by her father's predatory employee Meinart (Frtiz Rasp). As soon as Thymiane brings her baby to term, her father sends her off to a strict reformatory school for wayward girls. While Thymiane is locked up in the oppressive, prison-like school, Meta makes a play for Mr. Henning and the two eventually marry. Meanwhile, Thymiane and fellow fallen girl Erika (Edith Meinhard) make a cunning escape with the help of an ardent suitor, Count Osdorff (André Roanne). Desperate to find her baby, Thymiane arrives at the midwife entrusted to her daughter's care to find that the child died. The heartbroken, excommunicated Thymiane finds shelter in the home of a kindly older woman (Vera Pawlowa) - only to discover that she's the madam of a high-class brothel, intent on making Thymiane her newest protégé. In time, Thymiane has made something of herself - even becoming engaged to Count Osdorff, despite her disrepute. That comes crumbling to a standstill, however, when she has a chance encounter with her father and his wife, Meta, at a boisterous nightclub.

Based on that story description alone (which barely covers more than half the film!), one would be correct in assuming that Diary is one wild, densely plotted movie. The film ran into several skirmishes with the censors, resulting in a sprawling, unfocused patchwork which nevertheless served as a great vehicle for the expressive Brooks. Most of her character involves reacting to the behavior of others, which allows her to be a potent audience-surrogate. While Thymiane isn't as prominent here as Lulu was in Pandora's Box, Pabst sympathetically guides Brooks through the character's metamorphosis from innocent girl to hardened cynic.

By the end of Diary of a Lost Girl (no spoilers here), Thymiane has a bitter triumph, which comes off as satisfactory if a little too tidy - Pabst had another ending prepared which involved the girl opening her own high-class brothel, a spiteful victory against the sanctimonious do-gooders who sent her into disrepute. While that end would have made for a more substantial, satisfying movie, Pabst nevertheless makes strong statements about the double-standard of female sexual allure and a culture that finds women desirable only until they've actually had sex. That message gets muddled somewhat by several unneeded scenes (mostly not involving Thymiane), although the parts where the sexual tension is played up retain their power. In that respect, the most effective scenes come during Thymiane's time in the regimented girl's reformatory. Run by a tall, imposing bald man (Andrews Engelmann) and his buttoned-up, stern wife (Valeska Gert), the segments are as terrifying as any horror film of the day. The not-so-subtle desires of the sadistic couple come to a head in the movie's most iconic scene, with the wife leading a punishing exercise drill for the girls which culminates in her rhythmic banging on a gong to an orgasmic frenzy. As this disc's commentary track states, "It's a little surprising that this scene got past the censors." 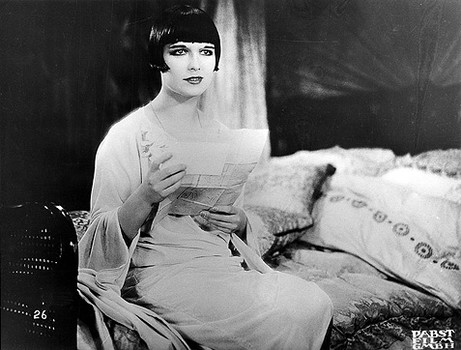 The video on Kino Classics' reissued version of Diary of a Lost Girl derives from a recent comprehensive digital restoration, a joint effort by three organizations in Italy and Germany. Heavily censored and released at various lengths throughout the years, this 112-minute cut is the most authentic to Pabst's original conception, with newly designed German-language subtitles authentically matched to the 1929 prints. While the source prints vary in quality from scene to scene, it looks beautiful - thorough, clean and pleasantly balanced. The Blu-ray edition in particular brings out some nice details in the photography. One scene sports a deep vertical scratch which apparently was too wide to adequately repair, while an aged, frequently censored scene with Meinhart about to have his way with Thymiane ends on a brief still frame.

The film's piano score by Javier Perez de Azpeitia is mixed in 2.0 stereo in a clean, pleasant mix. The English subtitle track is fine, albeit having one glaring typo - the title screen reads "DAIRY OF A LOST GIRL." No other sound or subtitle options are included

The disc includes a feature-length Audio Commentary from scholar Thomas Gladysz, director of the long-standing website The Louise Brooks Society. This was a good, informative track revealing lots of interesting tidbits about the production, the lives of the other actors seen on screen, and Brooks' own recollections on the making of the film. Kino has also retained the fascinating Windy Riley Goes Hollywood (18 min.) from their 2001 DVD, a low-budget two-reeler short with Brooks as a movie actress hit with a scandal. Produced by Educational Pictures in 1931 and directed by disgraced silent-era funnyman Roscoe "Fatty" Arbuckle, this cruddy comedy didn't do Brooks any favors. She's lovely, but it sure is strange seeing her speak and going through the motions in this nothing of a role - just three years past Diary. At the ripe age of 24, Hollywood deemed this still-vibrant personality a has-been.

Diary of a Lost Girl was another torrid, atmospheric collaboration between American actress Louise Brooks and German director G. W. Pabst. This is exquisite silent storytelling at its most lurid, with Pabst's craftsmanship and Brooks' knowing expressiveness making something special out of a ludicrous good-girl-gone-bad story. The Kino Classics Blu-ray presents the film in a meticulous digital restoration to savor. Recommended.