Having been a video game nut in the 1980s, if you had told me then that the movie Pixels would be coming out in 2015 I would have immediately started counting the days until its release. Back then I lived and breathed video games, so much so that my parents had to pull me off of them completely in 4th grade after a lackluster report card. The movie is "based on" this short film from 2010:

Of course that concept had to be a bit more fleshed out to hold up a feature film, so we get a cast of human characters involved here, introduced through a great prologue which I wouldn't have minded staying with for the length of the movie. In 1982, best friends Sam Brenner and Will Cooper bike to the brand-new arcade that's opened in town, meet their friend Ludlow Lamonsoff there and pour their quarters into the likes of Pac-Man and Donkey Kong. Sam is so great at the games that he gets into the arcade's video game tournament (hosted by Dan Aykroyd in a brief appearance), but only comes in second place due to Eddie "The Fire Blaster" Plant's slightly higher prowess. They both secure a place in history as their competition gets videotaped and placed aboard a space probe launched in hope of being discovered by life on other planets, where they'll see how important video games are on Earth. 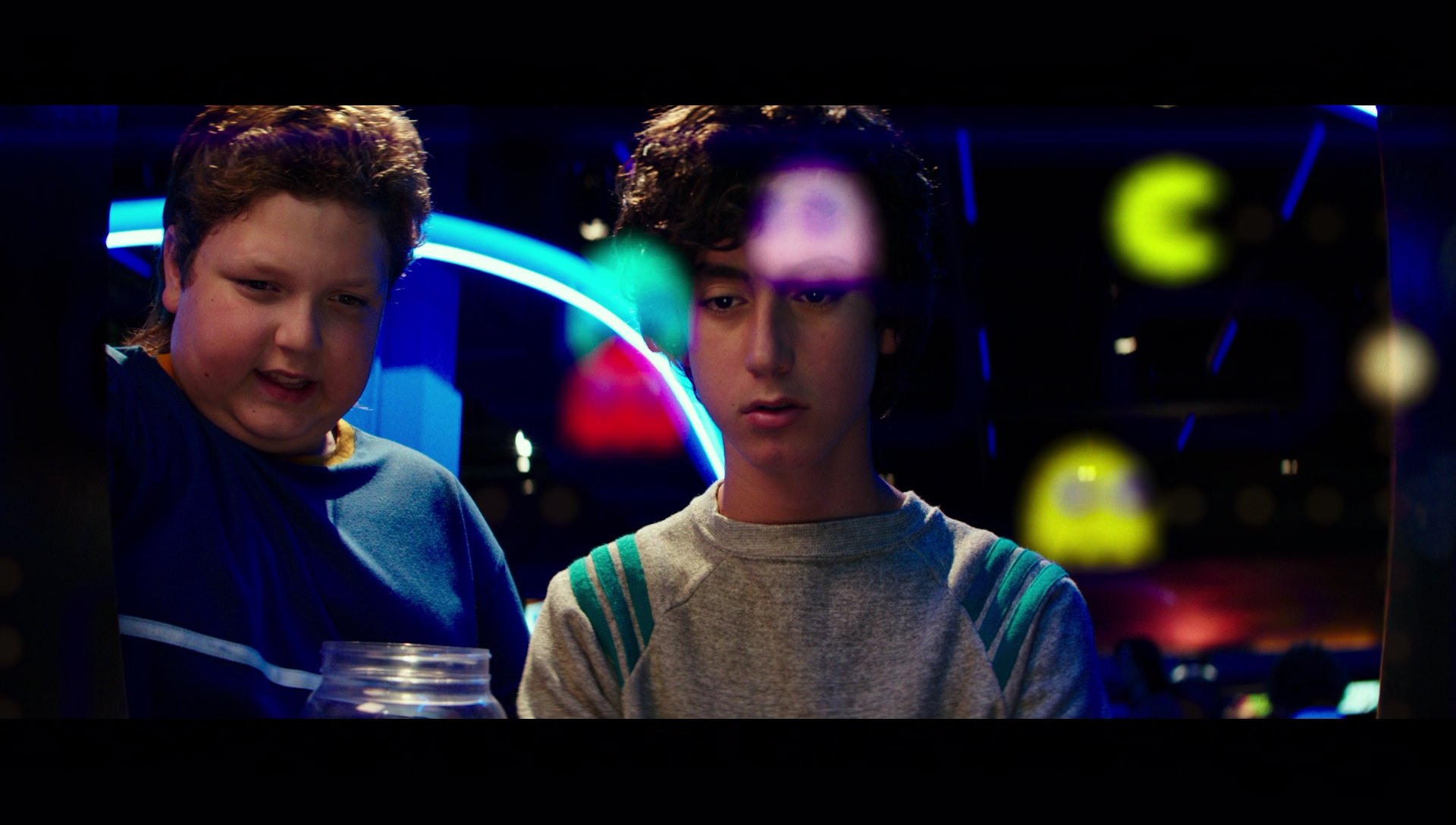 Jump forward to 2015- Sam (Adam Sandler) and Will (Kevin James) are still best friends, but Sam's highest career achievement is that of a "Nerd" technician for an electronics store (obviously referring to Best Buy's "Geek Squad") while Will (who was never too good at video games) has become President of the United States. Yes, that's right, though the in-between details of how he attained that position have been left out of the story in the interest of saving time I guess. But that means Sam gets to hang out with him at the White House. The President soon gets notice of an attack on a US military base in Guam by a mysterious fleet of spaceships. Later attacks happen around the world with leaders baffled at where they are coming from, but Sam notices a strong resemblance in the attacking ships to those of the game "Galaga". TV broadcasts are later interrupted with transmissions from another planet, with Ronald Reagan and Madonna among other 80s icons explaining what's going on- it turns out the game tournament tape was found, but they think the game-playing was Earthlings preparing to fight alien intelligence and so they're fighting back by sending video game characters to destroy Earth! Although the concept is ridiculous to the military personnel, Sam convinces them that the only way to fight this is to train all their fighters to play 1980s video games and use those strategies against the invaders. He also enlists the help of his old friend Ludlow (Josh Gad) and even gets "The Fire Blaster" (Peter Dinklage, acting like real-life video game champ Billy Mitchell) released from his prison term to join the fight.

All of this is an excuse for a series of set pieces where the gang, called "The Arcaders", fights off alien attacks in real-life video games. Their first battle is in a park in England which the aliens turn into the game "Centipede"- mushrooms drop down from the sky and a killer centipede descends through them, and the humans have to fight them off with laser guns. I'd always wondered how that game would play out in real life, and this is a decent depiction. One of the larger attacks sends Pac-Man eating up New York City (disappointingly he does not hit San Francisco as depicted on the movie's posters), and the Arcaders take the form of the game's "ghosts" in four cars painted in their same colors to take him out- although there are still "power pellets" around enabling Pac-Man to eat them instead just like in the game. Being particularly obsessed with Pac-Man back in the day I thought this was kind of silly and likely would've found this ridiculous, and it still sort of is but they manage to make it work. The best is closer to the film's end where they are sent into a life-size Donkey Kong game, set up like the game's first level. They take a few more liberties there that aren't accurate to the game, but it does look great on screen. 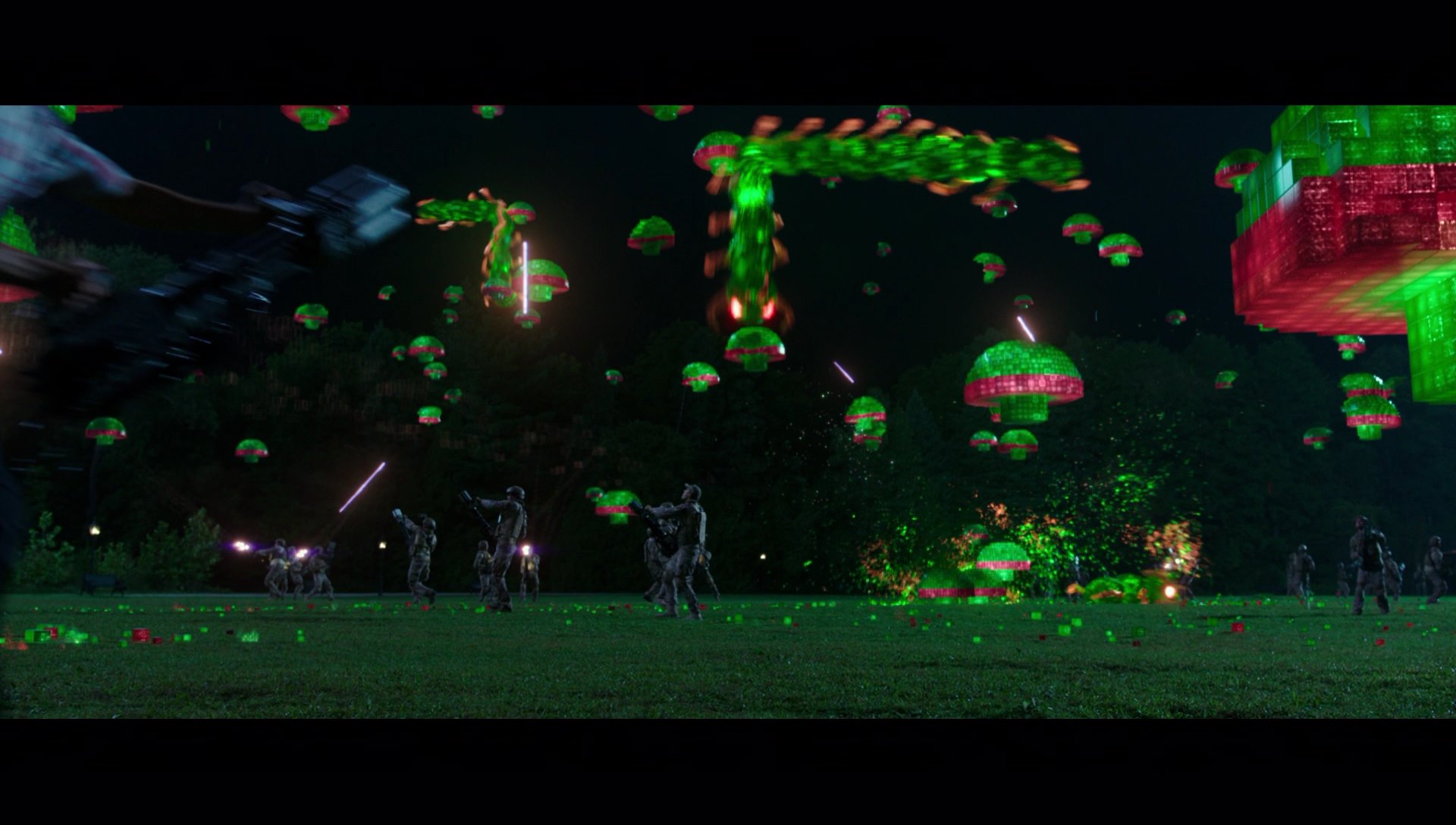 Pixels could have been an absolutely incredible movie in the right hands- although director Chris Columbus gives it a good shot, it's clear that he didn't get as much money to put into this as he did with the first two Harry Potter movies which appeared to have spared no expense. Writer Tim Herlihy, who has written many of Adam Sandler's previous movies, throws in a number of jokes which simply aren't funny and drag the movie down a bit. What's most frustrating about the plot is that the audience is never shown exactly who the attacking aliens are, where they are or how they came upon the tape and saw it as a declaration of war. Having them appear on TV transmissions in the form of 80s icons is sort of funny, but that still leaves one with unanswered questions in the end. Sandler himself does OK as an unlikely hero, even though his performance here is his usual "loveable loser" schtick that many audiences have grown tired of at this point (at the risk of losing credibility, I'll still maintain that Sandler's debut starring vehicle Billy Madison was one of the funniest movies I've ever seen but none of the laughs here can hold a candle to that.) Josh Gad is amusing however as a stereotypical nerd who's a bit behind the current times and has a decades-long obsession with the female hero from a fictional 1980s video game. The real stars of Pixels are the video game characters who attack Earth- there are an incredible number of them hailing from many different companies and it would likely have been impossible in the 1980s to license them all to appear together as they do here. While many appear only in passing, it brought big smiles to my face recalling some of the more obscure ones from games like Burgertime and Paperboy. While a few liberties are taken with the games that would have had me furious as a kid, they work in the movie for the most part and a sense of history is attempted by having the evil Pac-Man confronted by his creator, Toru Iwatani (played by Denis Akiyama as the real Iwatani doesn't speak English, but he does get a cameo early on as an arcade game repairman.) 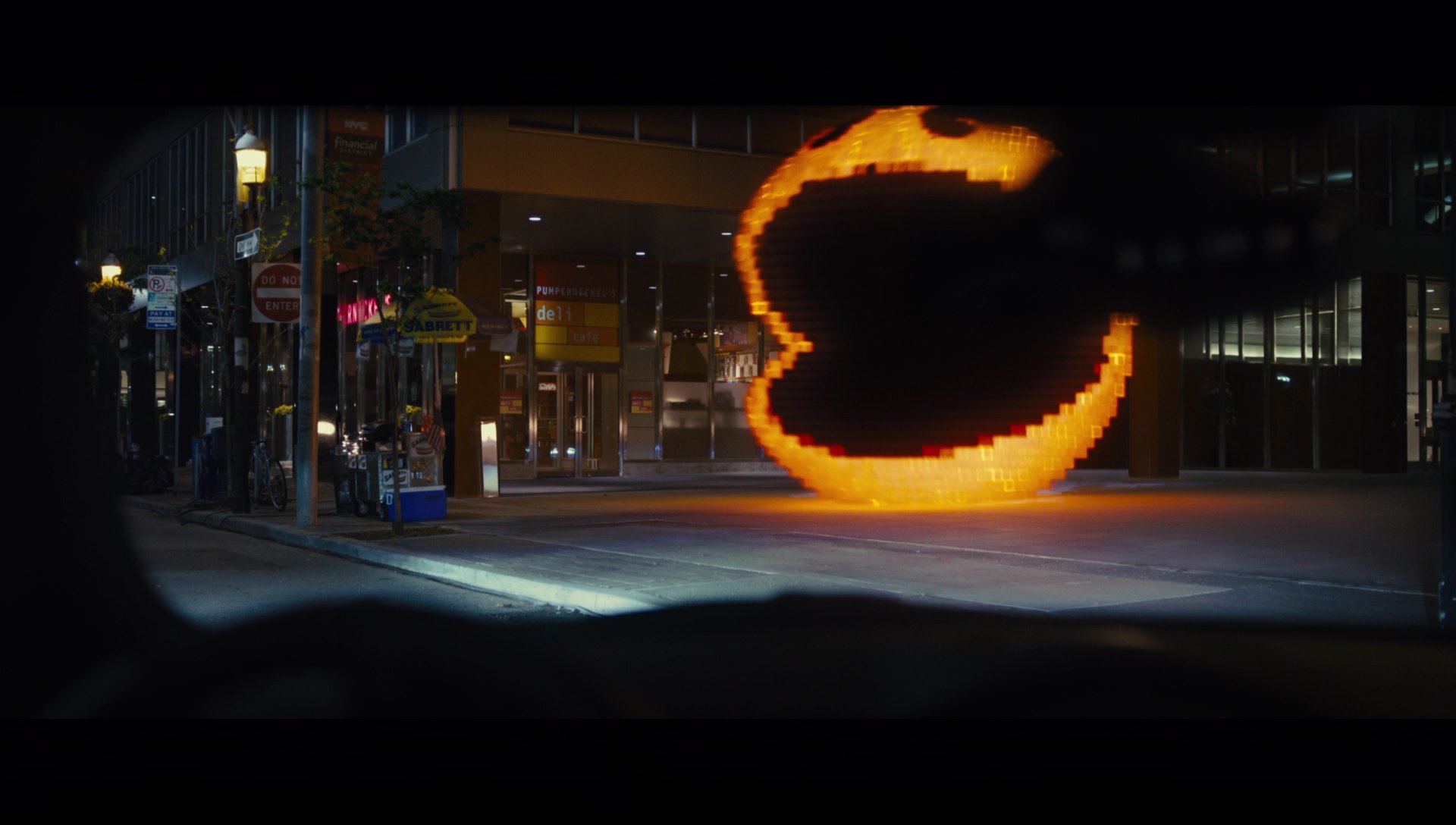 Shot using digital equipment in a 2.35 ratio, the picture looks good for the most part but it seems that Sony has gotten a bit lazy with the compression on this disc. Much of the movie takes place in the dark and I noticed a large amount of gradient banding, and even some dancing artifacts in the bottom letterbox bar. Pixels was released in 3D with the 2D-shot live action footage post-converted and is available as a separate 3D Blu-Ray, but the edition reviewed here only contains the 2D version. There are many moments which likely looked great in 3D, and hopefully I'll be able to get ahold of the 3D edition in the future. 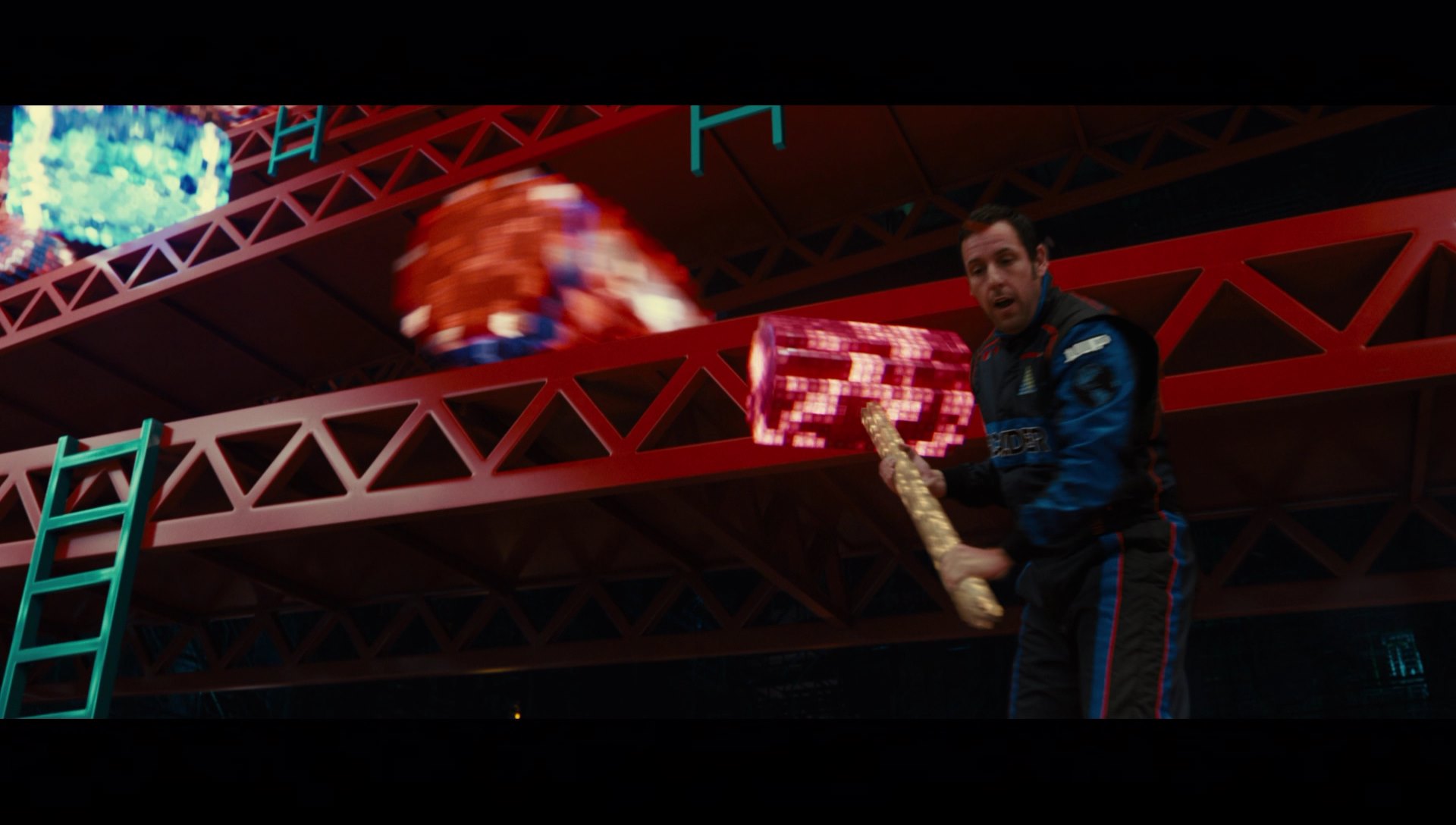 The audio is a decent effort in Dolby Atmos TrueHD. I'm not yet equipped for Atmos and had to "settle" for the underlying 7.1 track. As you'd expect there are many low-frequency explosions, and while the surround channels aren't always utilized to their full capacity they still get plenty of chances to stand out. On-screen instructions say for Atmos to work on a capable system, you need to set your Blu-Ray player's audio output to "bitstream" and turn off secondary audio. Oppo players have an "Auto" setting which will usually output Blu-Ray audio as either bitstream or PCM depending on how each disc was authored, but this automatically output as PCM even though there are no menu sound effects or other secondary audio. I'll have to keep watching how this is handled in the future after upgrading to an Atmos sound system and a newer player.

You also get a descriptive audio track in 2-channel Dolby Digital, with dubs in Portuguese, Canadian French, Spanish and Thai, and both standard English and hearing-impaired subtitles along with all previous languages plus Cantonese, both Traditional and Simplified Chinese, Indonesian and Korean. I will have to check these out to pick up the names used for video games in those languages. 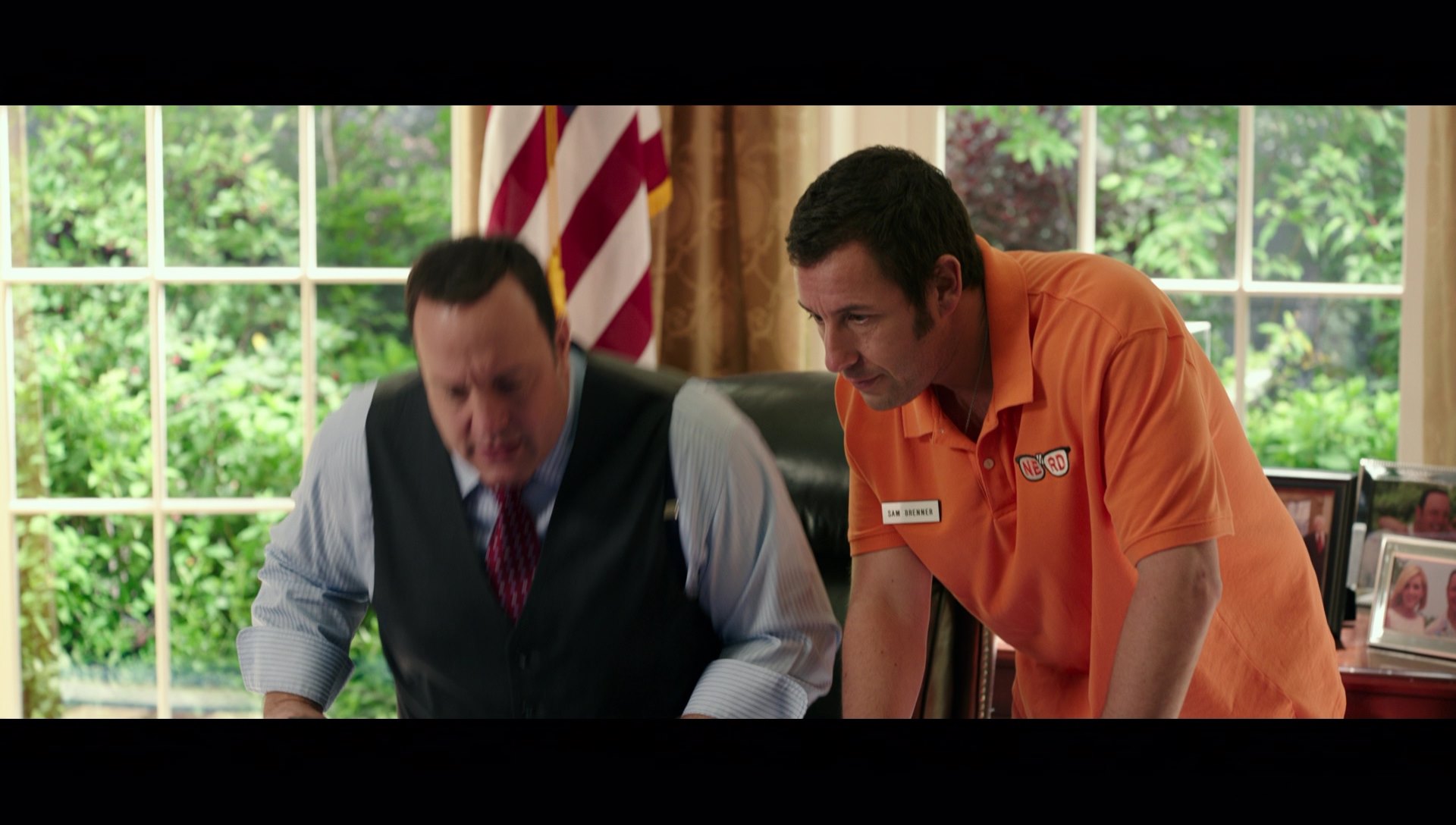 Featurettes show how each major video game set-piece was accomplished, it was particularly interesting to see how the Donkey Kong set was built. You also get bits on the fictional "Dojo Quest" game created for the movie, a short segment on Pac-Man creator Toru Iwatani, "The Space Invader" showing gamer Carson Jones winning a brief appearance in the audience of the movie's video game competition after he scored the highest on a Space Invaders game at Comic-Con, and finally a music video for the movie's closing song "Game On" (unfortunately only in 2-channel sound, as an impressive 7.1 mix was done for its playing in the movie.) The disc opens with trailers (all in 5.1 Dolby Digital) for Goosebumps, Paul Blart: Mall Cop 2, Aloha, Ricki and the Flash and Hotel Transylvania 2, which can be easily bypassed with the Menu button. A "Pixels Game App" is also available for your "mobile device" which seems to be a trivia game that syncs with the movie's audio. 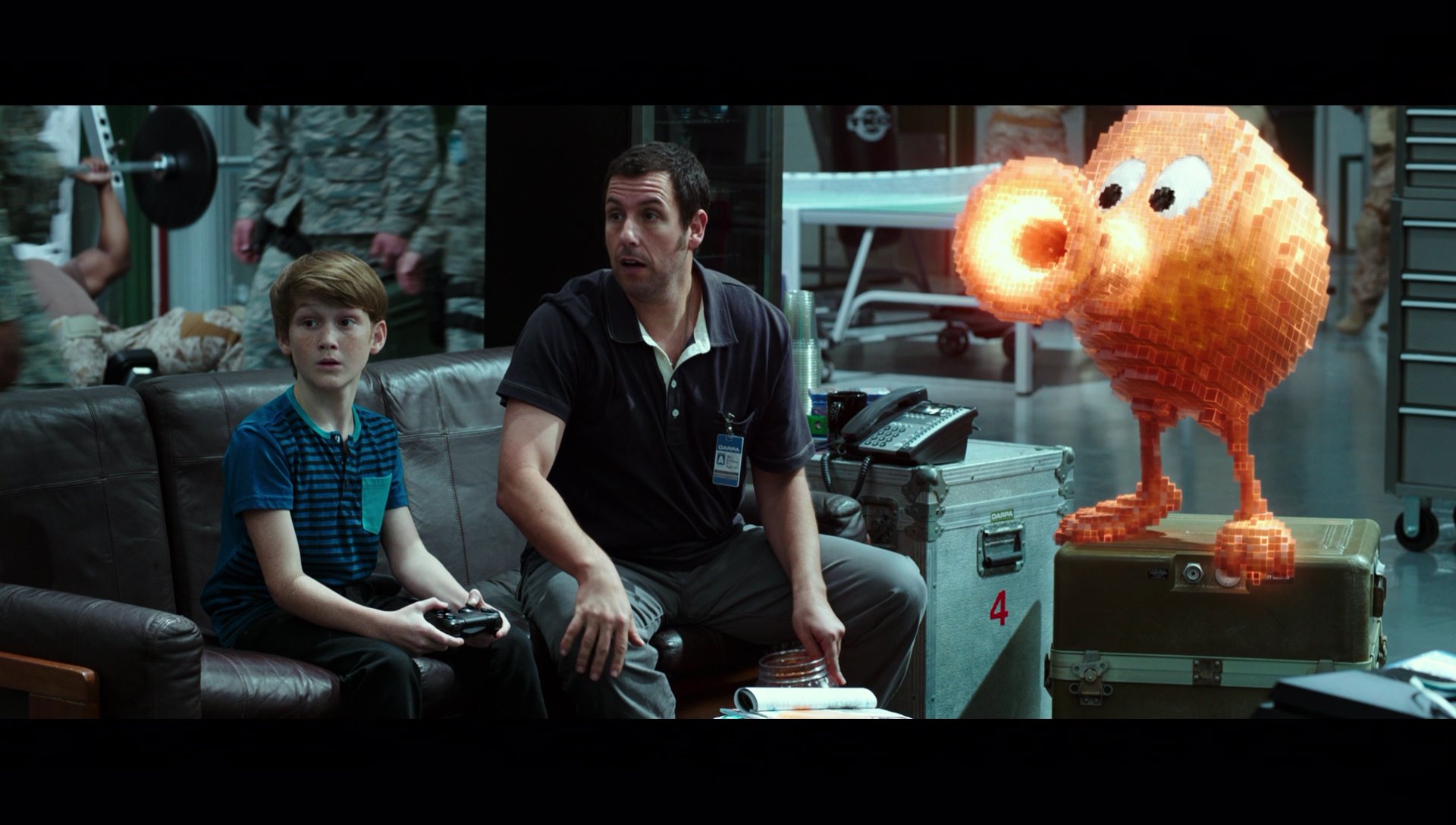 While Pixels is not all that it could have been, as an "old-school gamer" I still enjoyed it a lot. (Oddly I just can't get into the later generations of games, so I had to laugh at a scene where Sam expresses the same thing while watching a kid play a Playstation 4 game.) It would work great as a double-feature with the animated Wreck-It Ralph (which brought a few real classic games into its primarily fictional gaming world) or the documentary The King of Kong: A Fistful of Quarters. While game graphics have advanced exponentially since the 1980s, they've lost an element of gameplay that makes me go back to the older games rather than play the new ones and I always welcome any cinematic tributes to them.