Kino // G // September 29, 2015
List Price: $29.95 [Buy now and save at Amazon]
Review by Stuart Galbraith IV | posted September 21, 2015 | E-mail the Author
An eccentric, unambitious but still mildly interesting Western, Young Billy Young (1969) was apparently a factor in star Robert Mitchum's decision to retire from acting after its completion though, thankfully, David Lean changed his mind and instead Mitchum next made Ryan's Daughter (1970), in which he gave one of his very best performances.

Conventional wisdom says Young Billy Young is shot like a TV-movie, though most critics agreed that co-star Robert Walker Jr. and Mitchum especially were good. In fact the movie begins as a mildly unconventional Western before lazily recycling material from other, better films. There's a stage to Lordsburg, as in John Ford's classic Stagecoach (1939). The last third is a pretty shameless reworking of Rio Bravo (1959), Howard Hawks' seminal Western.

Both Rio Bravo and Young Billy Young were shot on the same Western backlot streets of Old Tucson Studios in Arizona, right down to the same jail set, prominent in both films. Angie Dickinson plays the female lead in both pictures, while Deana Martin, the daughter of Dean Martin (another Rio Bravo cast member), plays Walker's love interest.

Mitchum, meanwhile, had already starred in El Dorado (1966), the first of Hawks's two remakes of Rio Bravo. Also in El Dorado and Young Billy Young is veteran character actor Paul Fix, who in the latter film seems to be channeling Walter Brennan's character from Rio Bravo.

Originally released by United Artists, Young Billy Young comes to Blu-ray via a high-def transfer licensed to Kino by MGM. 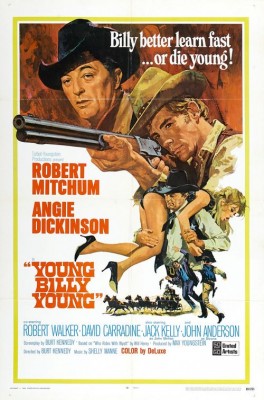 The picture opens unconventionally. In a long, largely wordless first act, outlaws Billy Young (Walker) and Jesse (David Carradine), across the border in Mexico, assassinate a Mexican general (Rudolfo Acosta), apparently as paid gunmen. A chase ensues, Billy is thrown from his horse, and Jesse abandons him.

Kane arrests Jesse after he kills an elderly doctor (Willis Bouchey), realizing Boone and his men will soon be closing in the jail.

Director Burt Kennedy adapted Heck Allen's novel Who Rides With Wyatt, originally about a friendship between Wyatt Earp and Billy Clanton, for Mitchum's El Dorado co-star, John Wayne. (One guesses the characters were fictionalized as Wayne, old and fat by this time, would have looked ridiculous as Earp.) When Wayne turned it down it went to Mitchum. According to Kennedy, Mitchum was thoroughly professional but couldn't contain his disdain of the material, shocking Old Tucson tourists with outbursts of profanity after each take.

Nevertheless, reviewers were right: Mitchum is fun to watch, as he was in just about everything he did good, bad, or indifferent, which is where Young Billy Young falls. The vaguely paternal relationship he has with Walker's character isn't all that interesting, and "impetuous youth" was something Walker had already played to death anyway. But Mitchum's scenes with world-weary saloon dancer Dickinson (who dresses more like a modern Las Vegas showgirl than a 19th century saloon girl) generate some heat, and their scenes together are sexy and almost memorable.

Young Billy Young has other eccentric elements. The percussion-heavy score is by jazz drummer Shelly Manne, orchestrations with lots of odd-sounding instruments including, I believe, at one point a toy piano. Further, though not identified until the tail end of the end credits, Robert Mitchum unmistakably (and well) sings the opening title song. Wikipedia credits Billy Edd Wheeler as the singer on the film's soundtrack album; maybe so, but it's definitely Mitchum in the film. ("Not the first time he did that, either," notes reader Sergei Hasenecz. "Mitchum sang the theme song for Thunder Road, did a few moments a capella in Farewell, My Lovely, and also released an album of calypso music in the '50s. He's got a good singing voice.")

In 1.85:1 widescreen, Young Billy Young looks pretty good, not great, on Blu-ray. Colors are decent and detail is good. The DTS-HD Master mono Audio has a very mild, tinny echo effect (especially noticeable when Walker's character is yelling, which is often); it's a lot like what movies sound like in big cavernous movie palaces. It doesn't distract from enjoying the film, but it's there. English-only, and the disc is Region A encoded.

Supplements are limited to trailers for this, Wonderful Country, also starring Mitchum, and two of James Garner's comedy Westerns, Support Your Local Sheriff! and Support Your Local Gunfighter. Did I miss something? I don't believe either of the Garners has even been announced, though they were reissued to DVD.

Not particularly good but worth seeing once, if only for Mitchum and Angie Dickinson. Rent It.