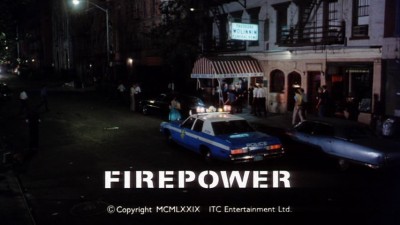 
The Film
Before the opening titles appear, 1979's Firepower has two, count ‘em, two cold opens. That's pretty impressive, and is emblematic of a film that doesn't know how to stop stuffing the sausage casing. There's more happening in this movie than its run-time can sufficiently pace out without becoming confusing and numbing. But if you ever wanted to see James Coburn drive a bulldozer through a house, here's your chance.

This is a summary of the plot, however it could be entirely wrong, because it feels like Firepower, directed by Death Wish helmer Michael Winner, is constantly hitting the reset switch, creating an experience that's sort of like flipping through TV channels. If you were to walk in on this film several times, there's a good chance you'd have no idea it was the same movie. After a scientist is killed, a retired bounty hunter named Fanon (Coburn, or "old John Mulaney") is recruited to capture Karl Stegner, the reclusive billionaire responsible for the murder. At the same time, the scientist's wife, Adele (Sophia Loren) sets out to kill Stegner. That brings them both to Antigua, where Stegner is hiding at his compound. Then there's lots of shooting, explosions, fires, twins(!), Billy Barty(!!) and double-crossing. And O.J. Simpson is in it too. 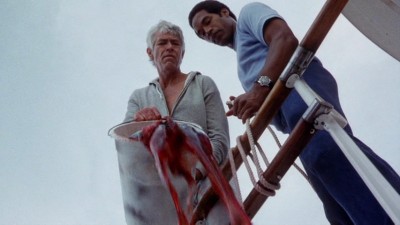 For fans of George Peppard's Banacek series, comparisons between suave white-haired heroes are unavoidable, and Coburn's character doesn't come out on the favorable side of that equation. Admittedly, part of it is a plot that's barely comprehensible making him seem like a cypher at best, but he doesn't have much more to do than act like a second-rate badass between set pieces that would seem excessive even if they weren't piled on top of each other like Fast and the Furious fan fiction. Loren isn't treated much better, though she's always a lovely presence. On the other hand, Simpson, if you can get past the whole double-murder thing (and really, why should you?) is pretty good as Fanon's criminal compatriot (shocking that he can play a criminal well…) This was Victor Mature's final film, while Vincent Gardenia and Eli Wallach are in here too, but they are minimally involved, so don't get your hopes up.

By the time the credits roll, Firepower reveals itself to be a confusing, unsatisfying mess, with a plot that doesn't quite make sense, and if you can suss out what the ending is supposed to mean, you're wasting your superior brain power on watching old movies when you could be solving cold cases for the FBI. That said, it's never boring, as there's always someone being shot, something burning down or something blowing up, including a ridiculous scene involving a shark and a bucket of blood, a boat versus helicopter shootout and the aforementioned, insane bulldozer scene, which must be seen to believed. Just don't expect to understand what's happening. 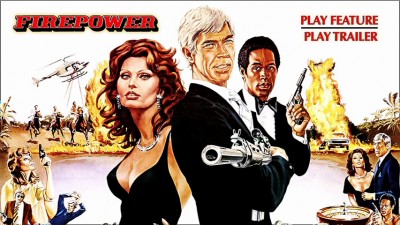 The DVD
The film arrives on one DVD, which is packed in a standard keepcase. The disc features a static, anamorphic widescreen menu with options to play the film and watch the trailer. There are no audio options and no subtitles.

The Quality
Described as being struck from a new HD master off the original ITV vault elements, the film looks good, with appropriate color (usually well saturated, but not blooming.) There's a decent amount of fine detail, though some shots are a bit soft, while black levels are solid and grain is stable, though a few scenes, those with large areas of flat color, look a bit noisey. There are some minor spots of damage and occasional jitter, but they are minimal.

The Dolby Digital 1.0 track is solid, particularly when it comes to the film's sax-driven score, including the catchy main theme, which is easily the best part of the movie. Dialogue is clear and easily understood, while all the gunshots and blasts have the right weight and power.

The Extras
The only extra is the film's full-frame trailer (2:14), which makes the plot seem more sensible than it really is, and serves mainly to highlight the quality of the disc's transfer. If you dropped this preview in the middle of The Kentucky Fried Movie, there's a good chance that few would notice. 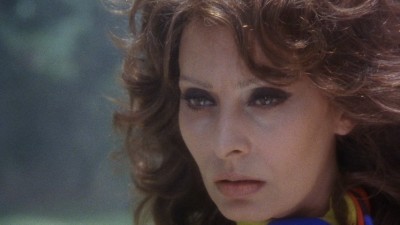 The Bottom Line
A bit of restraint could have made Firepower an enjoyable genre flick, but as it stands, it's too all over the place, making it frustratingly manic and incomprehensible. The DVD looks and sounds good, with next to no extras, making it one that you'd only check out if you're a hardcore fan of Loren or Coburn, or someone handed you a copy.