Let's be honest, the only reason you're interested in Cop Car is because its co-writer/director Jon Watts was recently tapped to helm the next Spider-Man reboot. Is this the fourth or fifth reboot of Spidey? I lose count. Also, are reboots like the old Subway punch cards? Ten reboots and you get one for free? Anyway, following in the tradition of Marc Webb, who drove the last Spider-Man franchise into the ground, and Colin Trevorrow, whose pandering and mind-numbingly mediocre Jurassic World miraculously became a huge hit, Watts is yet another indie director seemingly randomly picked by a big studio in order to direct a blockbuster franchise movie. The way the studios operate these days is not unlike the claw in Toy Story, just replace the interchangeable green alien toys with interchangeable indie directors. 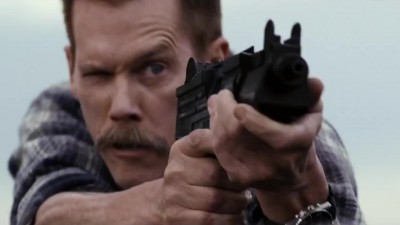 It's very hard to tell what drives studio executives to take major chances on these directors, since it's usually very hard to draw a link between their low budget work and their two hundred million dollar assignments. What was so kinetic about the hipster rom-com (500) Days of Summer that convinced Sony to hire Marc Webb? Sure, Cop Car shows that Watts has a knack in extracting natural performances from two child actors (Which doesn't really mean much, since 10-year-olds and 17-year-olds are entirely different entities), but the filler-oriented deliberate slow pace and the flat visual approach of Cop Car should have proven that Watts shouldn't have been trusted with a giant action blockbuster, not the other way around.

First off, Cop Car has enough narrative content to fill a 20-minute short, anything more proves to be overkill. Even then, the premise and execution are not unique or creative enough to have the project stand out, even as a short. As a feature that also makes the colossal mistake of intentionally stripping away any useful plot exposition or character development in an annoying attempt at rawness, it has so much filler that a ballpark hotdog would criticize it for not having enough substance. Consider an overlong scene where corrupt small town sheriff Kretzer (Kevin Bacon) tries to use his shoelace in order to unlock a car so he can steal it and go after the two brats (James Freedson-Jackson & Hays Wellford) who took his patrol car for a joyride.

Taking full advantage of the ever-reliable "rule of threes", Kretzer tries to unlock the car over and over again during a scene that easily eats up five minutes of screen time. The goal is simple: Create tension for the character while injecting some moral ambiguity into the audience by having them root for a bad guy to succeed, kind of like the sinking car scene in Psycho. But the problem is, we don't know anything about Kretzer beyond the fact that he's a cardboard psycho corrupt cop stereotype. If the characters and the story have to be so bland, could we have at least moved things along in a slightly faster pace? But then of course that means no feature, which means no sweet Spidey gig.

The kids are supposed to represent fearlessness and the free spirited nature of being a ten-year-old, but the way they're depicted grossly overshoots the "relatable naivete" mark and ends up making them look like colossal morons whose deaths would probably be an advantage to the betterment of society as a whole. As the kids put a bullet proof vest on each other and tried to fire assault rifles twice their size in order to test the vest, I prayed for Kretzer to catch up to them and put them out of their misery posthaste before they grow up to get a job operating heavy machinery and accidentally kill every last one of their co-workers.

There are some attempts at Coen Brothers-style dark humor in Cop Car, like a scene where Kretzer's rival (Shea Whigham) humorously struggles to find a decent hiding spot in the middle of a flat and desolate highway in order ambush Kretzer. However, the lack of interesting characters and a tangible story, as well as a paint-by-numbers indie crime drama conclusion, eventually destroys what little goodwill the film had left. 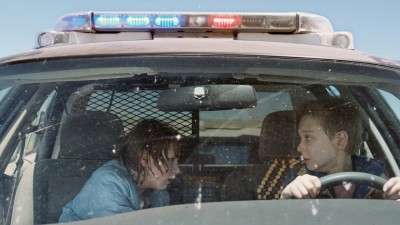 Cop Car sports a very flat and lifeless cinematography with a lot of evenly lit and bland shots. The 1080p transfer stays loyal to the film's look and presents clean video without any noise.

You'd think a film with such an intentionally simplistic premise would at least be brimming with style, but just like the visual style (Or lack thereof), there isn't much to praise about Cop Car's sound mix. In the DTS-HD 5.1 track, the ambient sounds during quiet scenes are effective, and the dialogue's clear, but you're gonna have to wait a long time before hearing any gunplay to rattle your system.

Their First and Last Ride: This is a 3-minute EPK/Trailer with some random behind the scenes footage. It's barely worth your time, even with the short length.

It's near impossible to figure out how Watts got his big gig on the merits of such a dull and forgettable film. With Webb's rom-com, you could see the sense of whimsy necessary to bring Spidey to life, and Trevorrow pretty much auditioned for a Speilbergian gig with Safety Not Guaranteed's horribly atonal ending. Maybe the answer actually lies in Watts' first feature, 2014's Clown, but if that one comes anywhere close to Cop Car's languid pace, I'm gonna need a lot of coffee before diving in.