Reeves, Price, Witchfinder General ingénue Hilary Dwyer and co-star Rupert Davies were all originally set to be reunited for The Oblong Box (1969), another British-made AIP production with almost no connection to Poe's short story, which involves ocean voyagers caught in a hurricane. Lawrence Huntington, a British director whose fun if disjointed Tower of Terror was recently released to Blu-ray in the U.K., was tasked with writing a more budget-conscious script. Reeves disliked it, however, dropped out of the project and died of a drug and alcohol overdose soon after at age 25, long before the movie was released. Meanwhile, Huntington also died just as the troubled film was going into production.

Director Gordon Hessler took over, with Christopher Wicking assuming scripting duties. But because the film was by this point about to go into production, Wicking could do little more than add new scenes in a futile attempt to improve the screenplay. (The already long and boring film was expanded to a longish 91 minutes, according to the IMDb and Wikipedia, but the Blu-ray runs even longer, 96 minutes. Whether this is a previously unseen longer, uncut version is unknown to this reviewer.)

The film that resulted is quite bad, a real mishmash of ideas: voodoo, a premature burial, a vengeful monster wearing a crimson mask, body snatching, embezzlement, etc. It was the first film to "team" Price with British horror icon Christopher Lee. Some sources state they share no scenes together but that's incorrect. Near the end of the film they're together, but for all of 20 seconds. Except for Price's performance the film is a major disappointment. Did I mention that the transfer looks great? 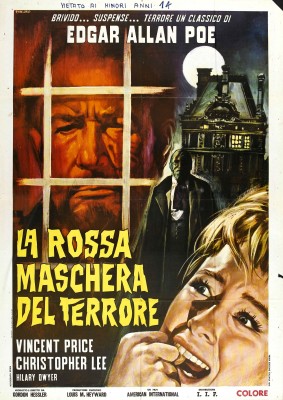 The disjointed story opens in Africa, where Sir Edward Markham (Alister Williamson, dubbed throughout by another actor), brother of plantation owner Julian (Price), is taken prisoner by black natives. In a voodoo ritual, Edward's face is then horribly transformed (not shown to the film audience).

Back in England, Julian keeps the by now insane Edward locked up in the attic. However, Edward has conspired with the crooked family solicitor, Trench (Peter Arne), to hire witchdoctor N'Galo (Harry Baird) to free Edward by drugging him and putting him into a death-like trance. They assume they'll be able to free him after Edward's body is removed, but instead Julian nails his sibling inside a coffin (the oblong box of the title) and unwittingly has him buried alive. As Julian ends up handsomely paying Trench to locate another body to replace Edward for the requisite public viewing, Trench is all too happy to leave Edward where he is.

But Edward manages to free himself (not adequately explained), dons a crimson mask and plots his revenge against Julian, Trench, and Trench's collaborators. Partly he achieves this by blackmailing dull surgeon Dr. Neuhartt (Christopher Lee), who is engaged in highly illegal research on body-snatched corpses.

Though Price and Hilary Dwyer, as Julian's fiancée, are both quite good, delivering performances in line with the earlier Corman-Poe films, nearly everything else about The Oblong Box is mediocre-to-terrible. Hessler's direction is quite bad. He keeps his camera some distance from Price's features, in wide and medium shots, while greatly overusing subjective, point-of-view shots usually but not always from Edward's vantage point, in distorted, hand-held close-ups. But there's no real reason for Hessler to do this. It makes no sense as the story is mostly told from Julian's point-of-view, not Edward's, and the latter doesn't come off as even remotely sympathetic. Nor is Edward consistent in his madness. Early scenes suggest his "incredible" transformation has left him a mute, murderous madman, but once freed from that oblong box he's inexplicably able to project the air of a highly articulate gentleman with long stretches of lucidity.

Another big problem with the film is that it endlessly and tiresomely teases Edward's monster face, building it up as something unspeakably horrifying. But when it's at long last revealed - in under-lit, badly chosen camera angles, no less - it's a profound disappointment. It's not monstrous at all; rather, it appears Edward is suffering from the combined effects of a slight allergic reaction and a mild case of acne.

Also not good: Harry Robertson's musical score, which always seems to include music where there should be none or no music where there should have been. And what music there is never seems an appropriate match to what's onscreen. The fine character actor Rupert Davies is wasted in a minor part, while Christopher Lee alternately looks bored and totally lost in his. Exterior shots set in Africa all to obviously look like rainy England while Wicking's padding becomes almost unbearable. There's even a gratuitous pub fight that has nothing whatsoever to do with any of the film's characters.

Presented in 1.85:1 widescreen, The Oblong Box at least looks great. Detail is very impressive in this 1920x1080p presentation, the colors are vibrant and apparently unaltered and blacks are reasonably strong. The DTS-HD Master Audio (2.0 English mono only with no subtitle options) is likewise fine, and the disc is Region A encoded.

Supplements include a short film adaptation of Poe's Annabel Lee (also 1969), narrated by Price, and an excellent, well-researched audio commentary by film historian Steve Haberman. A "Vincent Price Trailer Gallery" covers most of the Kino-licensed Price titles, including this one.

Not good but, for Price and Lee fans, worth seeing once, especially for its pristine high-def transfer, The Oblong Box is a Rent It.

Stuart Galbraith IV is the Kyoto-based film historian and publisher-editor of World Cinema Paradise. His new documentary and latest audio commentary, for the British Film Institute's Blu-ray of Rashomon, is now available while his commentary track for Arrow Video's Battles without Honor and Humanity will be released in November.