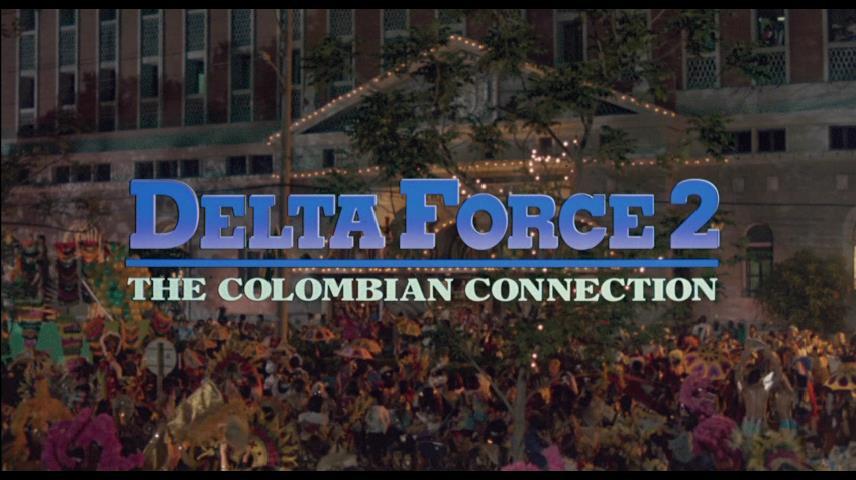 Yep, that's the COMPLETE title. (Its working subtitle was "Operation Stranglehold" but it's mostly gone without either outside of this appearance at the beginning.) This 1990 sequel to the 1986 movie from Cannon Films has Chuck Norris returning as Col. Scott McCoy with a different "elite team" than before and working more on his own than with any of them. This time, the Force's target is South American drug lord Ramon Cota (Billy Drago). He's been behind most of the cocaine brought into the US, produced by slave labor. The US Drug Enforcement Agency has been unsuccessful in bringing him down so McCoy with Major Bobby Chavez (Paul Perri) are called on to take him to America. Cota's in trouble then but since some of his rights were violated, the judge lets him out on $10 million bail which is "like pocket change" to him and goes back home- but not before sending some of his guys over to Chavez's house (while he and McCoy are out getting pizza) and killing his wife and brother. Furious, Chavez heads down to South America where he's greeted by some DEA agents who warn him to be careful since Cota is such a bad dude, and right away they're all captured by more of his men with Chavez being killed in a gas chamber while the rest are held hostage. After all this, McCoy gets the OK from the US government to hit Cota's fortress to rescue the captive agents and destroy a few things along the way. 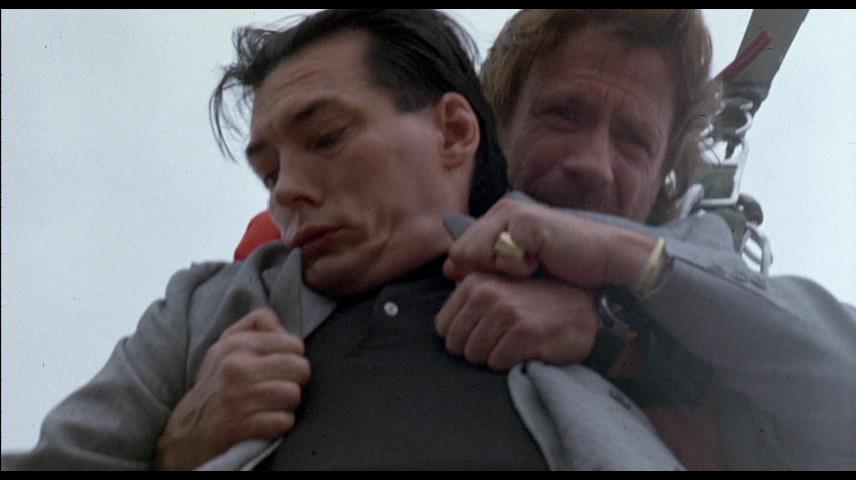 I didn't find this one quite as action-packed as the first movie- there's a lot of talking and bad acting during the first hour (though Cota's capture is done through a rather impressive skydiving sequence) but once the Force hits their target in the second half there's enough destruction and things blowing up to almost make you forget about that. Chuck Norris of course shows off his indestructibility, not only skydiving but also climbing an "unclimbable" mountain to reach Cota's lair at the top. Billy Drago is generically evil as Cota, who would likely seem revolting to audiences if played straight (one of his favorite things to do when his female slaves sit down on the job is kill their husbands and children and then rape them before putting them back to work) but since this is a Cannon movie and his whole demeanor is so cartoonish, you just have to laugh at how unrelenting he's made out to be. Delta Force 2 was directed by Chuck's brother Aaron Norris, who has also directed him in several other movies including Side Kicks (now when are we going to get THAT on Blu-Ray?) 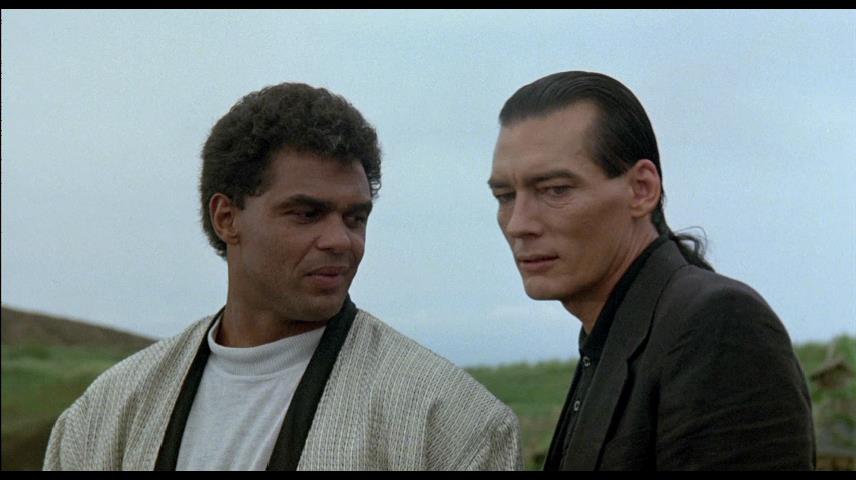 Presented here in 1.85, the video transfer looks mostly OK but has a few issues, primarily that it has a bit of a "screen door effect" look to it, reminiscent of Warner's early Blu-Ray and HD-DVD but not as pronounced. It's most apparent whenever text appears onscreen. Although I have not seen any previous video transfers of this movie, I was also a bit surprised at the amount of dirt and scratches during a few scenes, almost looking like a surviving 35mm print likely would if brought out and shown now, although there are no change-over cues at the end of reels.

The video encoding itself is not quite perfect either- compression artifacts (blocks) show up in a few dark scenes and are very apparent during the end credits. As I've seen on other Blu-Ray discs, these don't show up throughout the entire movie and other scenes look fine, but the artifacts eventually rear their ugly head- in some instances I noticed backgrounds looking blocky, then the movie would cut away and then back to that shot with it looking much better. The Blu-Ray of the first Delta Force looked nearly perfect to me, and watching this immediately afterwards was a step down. 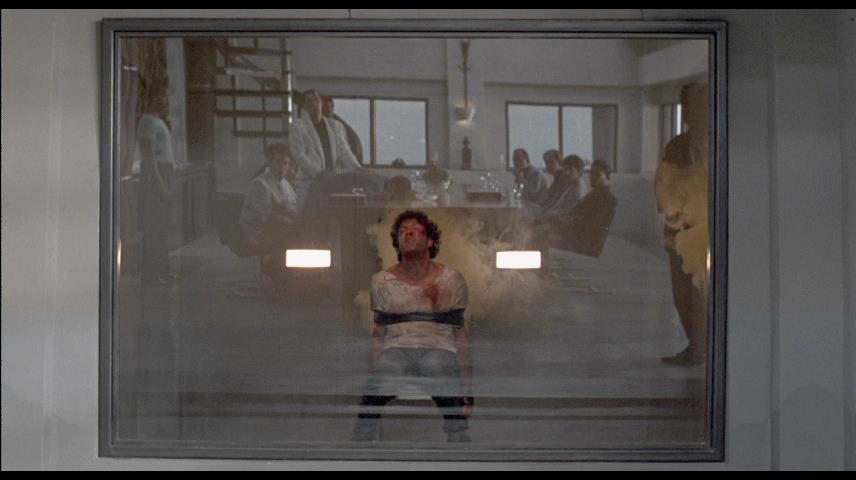 The Dolby Stereo matrixed surround mix is encoded in 2-channel DTS Master Audio and the disc is flagged to output as a straight bitstream on players that can be set to automatically detect this- posing a problem with some receivers (such as my Pioneer) which can't apply any surround decoding on 2-channel hi-res DTS tracks and play them only as 2-channel stereo. Manually setting my Oppo BDP-93 player to output all audio as PCM fixed this for me, but players without full on-board DTS decoding will only output the lossy core DTS track if set that way. (Permanently setting the Oppo to always output PCM is not advisable as that will discard the extra surround channel on standard DVDs with 6.1 DTS-ES tracks.) I don't know why most 2-channel tracks aren't just encoded as straight PCM as there can't be that much of a space difference, but this is a pretty good track when properly decoded with lots of ambient sound and front-to-rear panning as helicopters fly and missiles are fired. The sound seems to come from a master as despite the print damage seen in the picture, there was no noise corresponding to the optical audio track in such a condition.

The theatrical trailer for Delta Force 2 is included in 4x3 standard-definition, along with 1080i hi-def trailers for Hero and the Terror (with a stuttering effect in the video) and An Eye For An Eye. 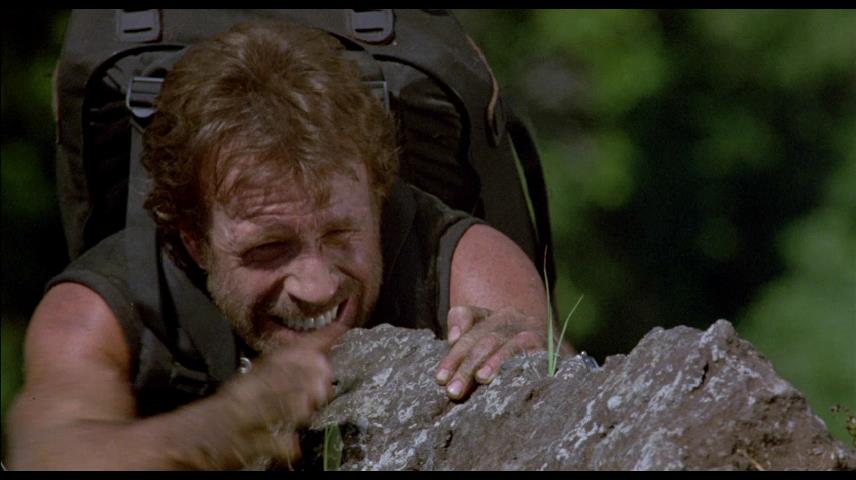 While not as action-packed as the original Delta Force, this one still has enough moments (mainly the conclusion) which earn it a recommended rating. While the picture isn't the best that the Blu-Ray format is capable of, I've read that previous DVD editions of Delta Force 2 have had their own problems, such as MGM's initial offering being only in 4x3 format. Those who have the DVD or any other previous format may want to assess their satisfaction with those, as this Blu-Ray disc's picture quality is not perfect.