What drives mountain climbers to do what they do? It's hard to get an insightful answer to that question from the climbers themselves, since they tend to put their entire physical and emotional focus on the goal of reaching the summit. As evidenced by this year's perfectly serviceable mountain climbing disaster flick Everest, they'll probably answer your question of "Why?" with a simple "Because it's there!" Perhaps that's why, as a mountain-climbing documentary, Meru is so special, since it digs deep into the question of why so many people risk life and limb to climb mountains. 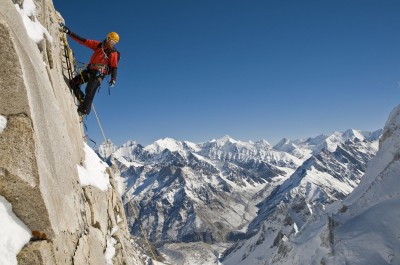 Apart from possessing the usual elements of these docs, complete with spectacular shots of the mountain in question, intercut with interviews with talking heads letting us know at every step how insanely dangerous mountain climbing actually is, Meru also manages to empathetically articulate the love and obsession climbers have about reaching a summit their peers deem to be an impossible destination. Meru tells the story of three top-tier climbers attempting to reach the summit of Mount Meru, which basically requires a 90-degree climb through an icy hell for weeks.

Mount Meru is so infamous regarding its hardship, that we're told that even though legendary climber Conrad Anker bested Everest multiple times, and even skied down from the summit once, the task of climbing Meru might be impossible even for him. Of course that doesn't stop Anker and his Insane Mountain Posse consisting of Jimmy Chin and Renan Ozturk to attempt a climb in 2008. The recent advancements in digital HD photography became especially valuable for sports documentaries like Meru, where the climbers are able to use the tiny cameras they brought along in order to capture beautiful footage of the mountain with stunning clarity.

The footage from the climb is intercut with interviews with the climbers, as well as with, of course, Jon Krakauer. At this point, I feel like you can look at your bathroom mirror, say "I'm making a mountain climbing documentary" three times, and Krakauer will magically appear. All joking aside, Krakauer's knowledge about Meru, as well as his ability to articulate the many hardships of the climb to those who know practically nothing about mountain climbing (Guilty as charged), builds the expositional backbone of the documentary.

For a non-fiction film, Meru surprisingly manages to mold its story into a fairly familiar three-act structure. The first act is about the first failed attempt at climbing the mountain. The second act gets deeper into the climbers' obsession with finally besting Meru, despite some fairly serious physical and emotional hardships. This is the section of the story where we get the typical reestablishment of the characters' drive and motivation after they've been beaten down, complete with a Rocky-style training montage. Of course this trope is made fresh this time around since Meru isn't fiction. You can guess what the third act entails after all that buildup, and it's just as enthralling as you might imagine. 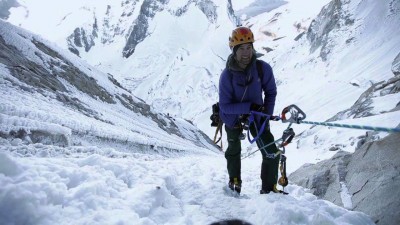 With plenty of gorgeous footage of the mountain taken during the climbing attempts spliced together with more professional extreme long shots, it should go without saying that Meru should be an instant Blu-ray purchase for those interested in sports documentaries and especially stories about mountain climbing. The many different sources of footage are put together seamlessly and the 1080p transfer shows amazing clarity, even when we're privy to shots taken with tiny consumer cameras.

The in-camera audio that was captured during the climbs is enhanced and remixed into the DTS-HD 5.1 track in order to fully immerse the viewer into the story. The surround tracks mostly provide ambiance, like the sounds of harsh wind, but this track is essential for getting the complete experience. The interview sections that stick to front channels can also be heard clearly.

Commentary by Jimmy Chin and Elizabeth Chai Vasarhelyi: This is the commentary to listen to if you want mostly technical information about the production. The co-directors go into quite a lot of detail about how the project came together.

Commentary by Conrad Anker: On the other, if you want a more personal take, listen to this commentary by Anker, one of the Mount Meru climbers. Anker gives a heartfelt testimony about how much climbing means to him, and the joys and hardships of the climbs showcased in the film.

More from Mount Meru: These are basically a series of deleted scenes that amount to around 30 minutes. You can watch them with optional commentary by Conrad Anker.

Jimmy at the Chicago Premiere: A 15-minute Q&A session with the co-director.

Full Frame Q&A: This Q&A is the one to watch if you have time for only one of the three interviews included in the disc. Chin and Vasarhelyi are joined by Conrad Anker this time around for a friendly and loose conversation about the film.

Meru is a surprisingly insightful and emotional journey about the inherent human desire to achieve the impossible. This Blu-ray, with near-perfect A/V presentation and great extras, is highly recommended not only to fans of mountain climbing documentaries, but also for the general audience who's looking for a captivating story told with breathtaking visuals, that also happen to be 100% real.