Twilight Time // Unrated // December 8, 2015 // Region 0
List Price: $29.95 [Buy now and save at Twilighttimemovies]
Review by Stuart Galbraith IV | posted January 11, 2016 | E-mail the Author
The Detective (1968), the neo noir adapted from Roderick Thorp's novel and starring Frank Sinatra, is subtly misunderstood by most. Its detractors point to the film's outdated, even campy depiction of homosexuality, on which the plot revolves, and what they perceive as conservative moralizing, a reflection of its increasingly conservative star, while begrudgingly conceding that the picture is pretty effective in other ways. Its champions, meanwhile, point to its gritty, ahead-of-its-time depiction of urban police work, a style anticipating everything from movies like The French Connection to TV shows like Hill Street Blues and Law & Order, while admitting the film is hopelessly old-fashioned in certain respects. Both sides point to The Detective's timing, a May 1968 release, to make their case. That was a little over five months before Hollywood's unenforceable Production Code was replaced by the MPAA's (theoretically) more enlightened rating system. In short, The Detective is more explicit than would have been permitted just a year or two before, but less so than would have been allowed a half-year later.

Both positions and the observation about the film's timing are valid generally but miss important points. Mainly, The Detective should be applauded for all it achieves, which is considerable, rather than for the ways it falls short by contemporary standards, shortcomings that are overstated when the film is put into proper context.

And the film's attributes are much, much more apparent in Twilight Time's new all-region Blu-ray, which offers a picture-perfect high-def transfer, a vast improvement over Fox's 2005 DVD. 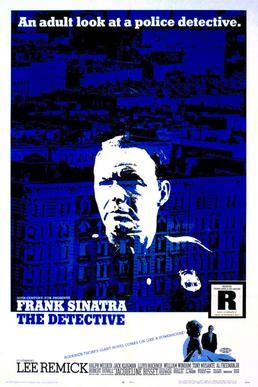 The film's ambitions are apparent from the opening shot, a free-frame of a reflection on a car windshield, in which New York high-rises are both blurred and upside-down. As the film that follows demonstrates, this is a story where genre conventions are relentlessly upended.

Detective Sergeant Joe Leland (Sinatra) reports to the scene of a homicide, the grisly murder and sexual mutilation of a wealthy homosexual. The murdered man's roommate becomes the prime suspect, but he's taken a powder. During the search for the housemate, Leland recalls the disintegration of his marriage to sociology student (later professor; the movie's not entirely clear about this) Karen Wagner (Lee Remick). At least a third, maybe even 40% of the film's 114-minute running time is devoted to flashbacks, most relating to this relationship. Much later in the film, Leland becomes involved in another, seemingly unrelated case, in which an attractive widow, Norma MacIver (Jacqueline Bisset) asks Leland to reinvestigate the death of her husband, ruled a suicide under suspicious circumstances.

Sinatra and director Gordon Douglas had worked together thrice before, on Young at Heart (1954), Robin and the 7 Hoods (1964), and Tony Rome (1967), and would again immediately after, on Tony Rome's 1968 sequel, Lady in Cement. Compared to those other ‘60s collaborations, The Detective is a revelation. Sinatra did little more than show up on a lot of his later films, coasting on his rat-packing persona. Occasionally though, John Frankenheimer's The Manchurian Candidate (1962) being an obvious example, Sinatra sensed he was involved in something special, and took his involvement much more seriously.

Such is the case with The Detective. Sinatra flexes his acting muscles by uncharacteristically pulling back, greatly dialing back the swagger and instead spending most of the film observing the behavior of others while expressing his emotions implicitly. For some reviewers, this implicitness implies tacit approval to the police brutality and intolerance swirling about him, but Abby Mann's rich adaptation leaves no doubt that Sinatra's Leland is as disgusted as he is defeated.

The movie covers an enormous amount of ground while populating Leland's squad room with an impressively varied range of fellow officers. In an early, eerily prescient scene, everyone huddles around a young cop, Harmon (Tom Atkins, in his screen debut), who during a routine traffic stop has killed a (presumably) unarmed black passenger. (Dialogue calls this "a civil rights case," leaving little doubt about the dead man's race.) Harmon, still in shock but desperate to keep his job and avoid criminal charges, inconsistently argues that the victim reached for the glove compartment and/or his gun discharged accidentally. Leland puts it to Harmon that "It was either an accident or you panicked," but Leland's boss, Lt. Farrell (Horace McMahon, reprising his Naked City character in all but name), rushes to Harmon's defense, if only to protect the Department. This disgusts Leland, but what can he do about it?

Similarly, Leland is unquestionably appalled by the virulent homophobia exhibited by several co-workers, particularly Det. Sgt. Nestor (Robert Duvall), a sadist who clearly enjoys beating the innocent gays being rounded up and questioned about the murder. Leland doesn't tolerate this behavior for very long, punching Nestor in the gut as he had been doing to them.

Some argue The Detective depicts homosexuality as a morally disgusting mental illness (to add some perspective, it wasn't removed from the American Psychiatric Association's DSM-II until 1973), but Leland is ambivalent toward consenting adult gay men, saying only, "I got my own bag." The movie's depiction of gays is reminiscent of scenes in the liberally-minded Otto Preminger film Advise and Consent (1962), sympathetic toward closeted gays and their terror, especially in those less enlightened times, of being outed. The Detective may be fairly clueless about the gay milieu; it's populated by homophobic straight men, but is not anti-gay itself.

The film has a genuinely great cast, particularly in Leland's squad room where talented actors use a kind of shorthand to enrich characters that, in some cases, have relatively few lines: Ralph Meeker as dirty cop Curran, Jack Klugman (minus his usual hairpiece) as mensch Schoenstein, Duvall as homophobe Nestor, McMahon as pragmatic Farrell. Overdone but still effective is Al Freeman, Jr. as wide-eyed African-American rookie Robbie who, by the end of the film, adopts interrogation (i.e., torture) techniques he picked while watching a documentary about Nazi concentration camps, stripping a suspect and humiliating him because it makes him "feel more vulnerable."

Other fine performances and surprises include turns by William Windom, Sugar Ray Robinson and, in an uncredited bit as a reporter with no lines, Joe Santos. (Bette Midler reportedly is in the film somewhere, but I didn't spot her.)

The picture is a strange jumble of frank talk, frank sex, taboo subjects, and wildly inconsistent concessions to the Code. The otherwise excellent opening scenes, a very clinical, accurate look at a horrific crime scene, is marred by the ludicrous positioning of a big fern lest the camera catch a glimpse of full-frontal nudity, something that would have been permitted under the MPAA guidelines months later. And yet, conversely, Leland's dialogue refers to the victim's penis and semen staining the sheets.

There's a lot of sex talk, but "balling" replaces "fucking," and there's an awkward use of "turd" for "shit" later in the picture. Even so, there was no way a film this explicit could have been shown on American television without serious cuts, probably well into the 1980s.

Ultimately, Sinatra's Leland isn't so much a bastion of conservative purity as he's just an honest cop with a moral baseline the same as, say, Sam Spade exhibits. I'd argue that, unlike DVD Savant's assertion that Leland is "the soul of racial understanding," instead he's just an experienced professional who's more or less apolitical, that his views of race, if he has any at all, are irrelevant. Leland certainly in no way resembles Jack Webb's Joe Friday on the concurrent revival of TV's Dragnet, particularly in how, in Friday's world, policemen are always dutiful, incorruptible civil servants. The Detective argues Joe Fridays are more the exception than the rule.

Filmed in Panavision with original prints by De Luxe, the 1080p transfer of The Detective looks great. With an almost seamless mix of real locations and studio sets, the picture looks both gritty and slick at once. Most of the film takes place at night, or in dark interiors, all of which looked pretty terrible on TV, VHS, and even to some extent on DVD. The Blu-ray, however, captures the richness of the cinematography well. The 1.0 DTS-HD Master Audio is also very good, with Jerry Goldsmith's judicious use of jazzy music (anticipating some of his later themes from Chinatown) available on an isolated track. The disc is region-free and includes optional English subtitles.

Supplements include two trailers and an audio commentary track with David Del Valle, Lem Dobbs, and Nick Redman, one this reviewer didn't particularly care for, despite quite enjoying many of Del Valle's tracks for other films. Julie Kirgo's liner notes round out the extras.

I'd seen The Detective once or twice before and didn't particularly care for it, but Twilight Time's Blu-ray really turned my opinion around. It looks great and deserves a better reputation, particularly for all that it achieves at the time in which it was made. Highly Recommended.