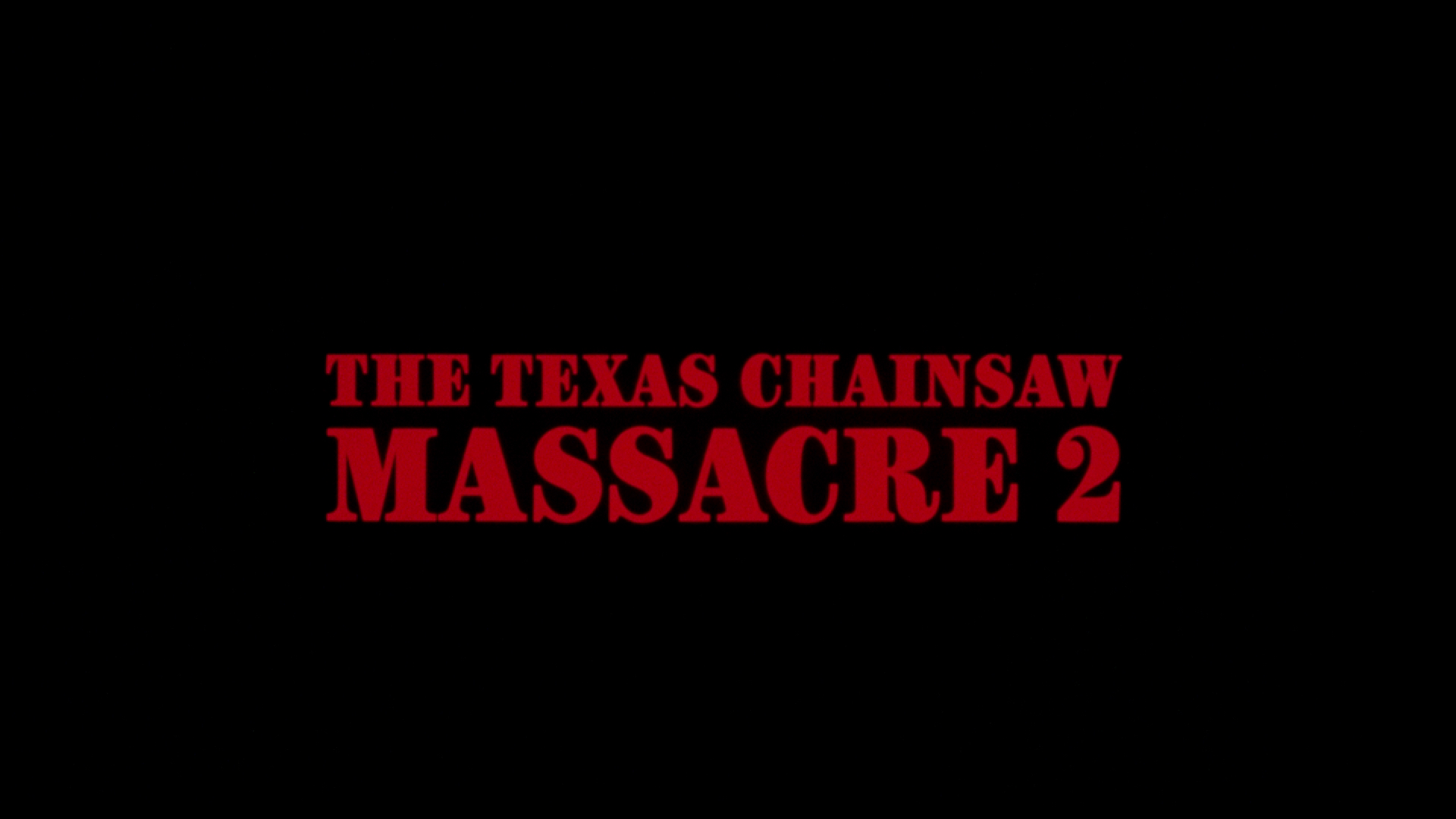 Tobe Hooper waited 12 years to make a sequel to horror milestone The Texas Chain Saw Massacre, and, upon release, The Texas Chainsaw Massacre 2 died hard at the box office and with critics. Three decades later, those wounds have healed, as Leatherface's second outing is now rightfully enjoyed as a darkly humorous send-up of ‘80s excess and B-movie terror. What Hooper did here was perfect. There is little chance he could have followed up The Texas Chain Saw Massacre in the same nihilistic, high-tension style and made another classic. That film would have been forgotten. Instead, Hooper makes his sequel about the redneck cannibal family that raised Leatherface, and includes plenty of humor-laced gore and suspense. Horror fans will want a copy of this movie in their collections, and Scream Factory's new Collector's Edition Blu-ray is a top-tier release.

Set a decade after the events in the previous film, The Texas Chainsaw Massacre 2 informs viewers, via title cards, that reports of disappearances and chainsaw murders have continued in Texas, though no law enforcement agency has been able to confirm the existence of Leatherface. In the opening scene, two preppy assholes race down a remote highway, boozing and shooting guns out the window. They encounter a black truck and try to force it off the road. Minutes later, they prank call local radio DJ Vanita "Stretch" Brock (Caroline Williams), and hold her on the line. Stretch soon bears witness to a coordinated attack on the deserving tourists by Leatherface (Bill Johnson) and Chop-Top (Bill Moseley). Lieutenant "Lefty" Enright (Dennis Hopper) - the uncle of Sally and Franklin Hardesty, previous Leatherface victims - is in town following the cold trail of death, and Stretch approaches him with an audio recording of the recent attack. 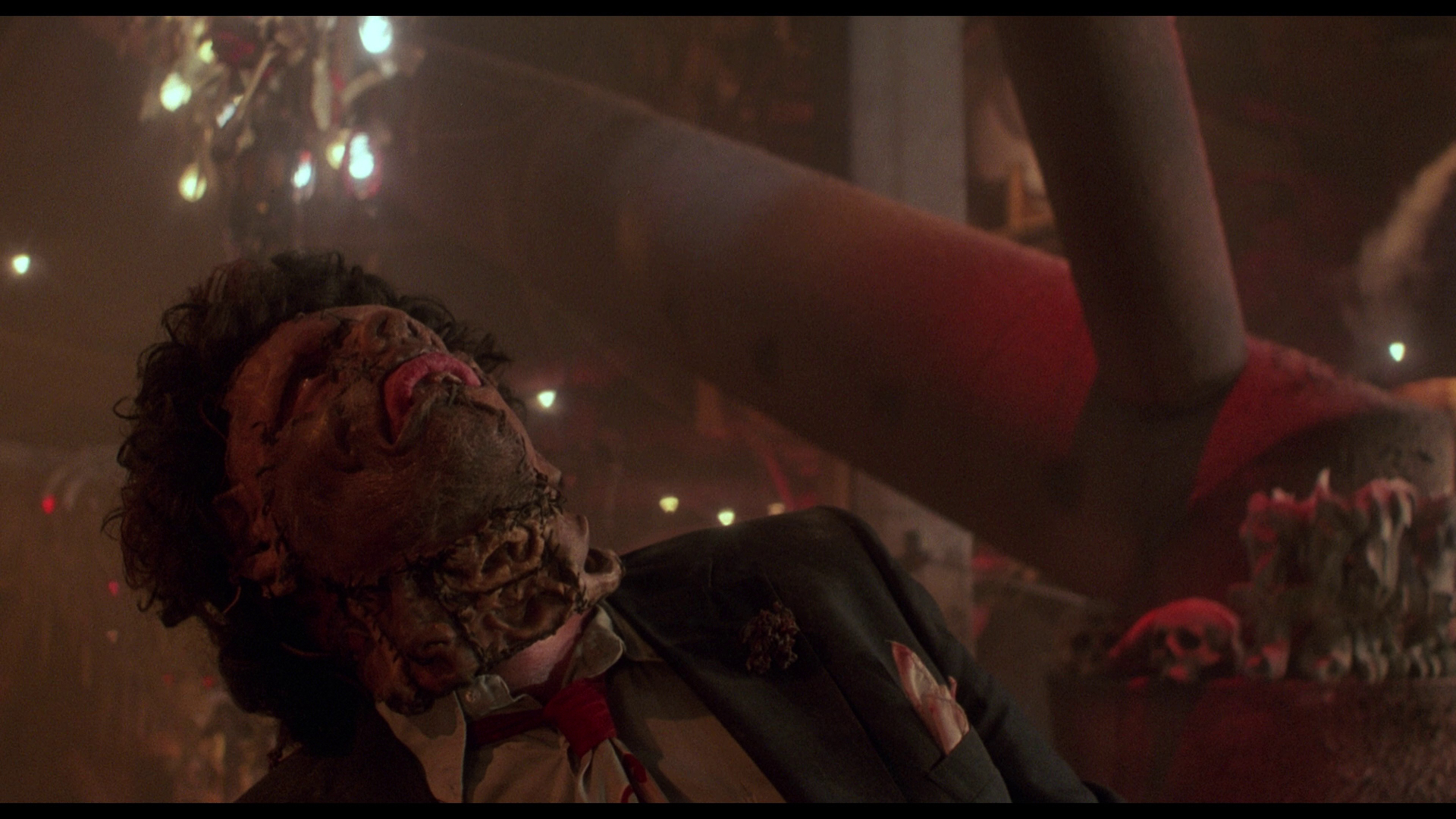 Released after a wildly rushed production schedule by Cannon Films, The Texas Chainsaw Massacre 2 offers opening murders with more blood and effects than the entire first film. Things then merge into a different lane, full of morbid laughs, pratfalls and cannibal killers. The first film had humor if you knew where to look: the dinner scene, "Look what your brother did to the door!" This movie has a lot more of it, thanks to Moseley's insane Chop-Top and Jim Siedow's Drayton Sawyer, who is introduced while winning a chili cook-off. Dennis Hopper is also magnetic, and his character is almost as crazy as the Sawyer clan. Williams gives a strong performance as Leatherface's "girlfriend," and is suitably feisty even when bathed in terror. The effects from Tom Savini are impressive, and earned the film an X rating.

It is understandable that audiences did not quite know what to make of this sequel in 1986. It lacks the raw power of the original, but is still a hell of a ride. The plot slows down a bit in the midsection. The opening murders roll quickly into necessary exposition before the film offers a cat-and-mouse chase at the radio station. The basement of the Sawyer estate is dank and familiar, and The Texas Chainsaw Massacre 2 spins its wheels in the dark for a while before waking up grandpa to terrorize Stretch. The finale recalls the original's coda, but turns that final shot on its head. Highlights of the film include Stretch and Leatherface's uneasy bonding, the reveal of Grandma Sawyer, Drayton's chili, Chop-Top's metal plate, Richard Kooris' cinematography, and Hopper acting generally insane with a chainsaw. This is good stuff, horror fans. 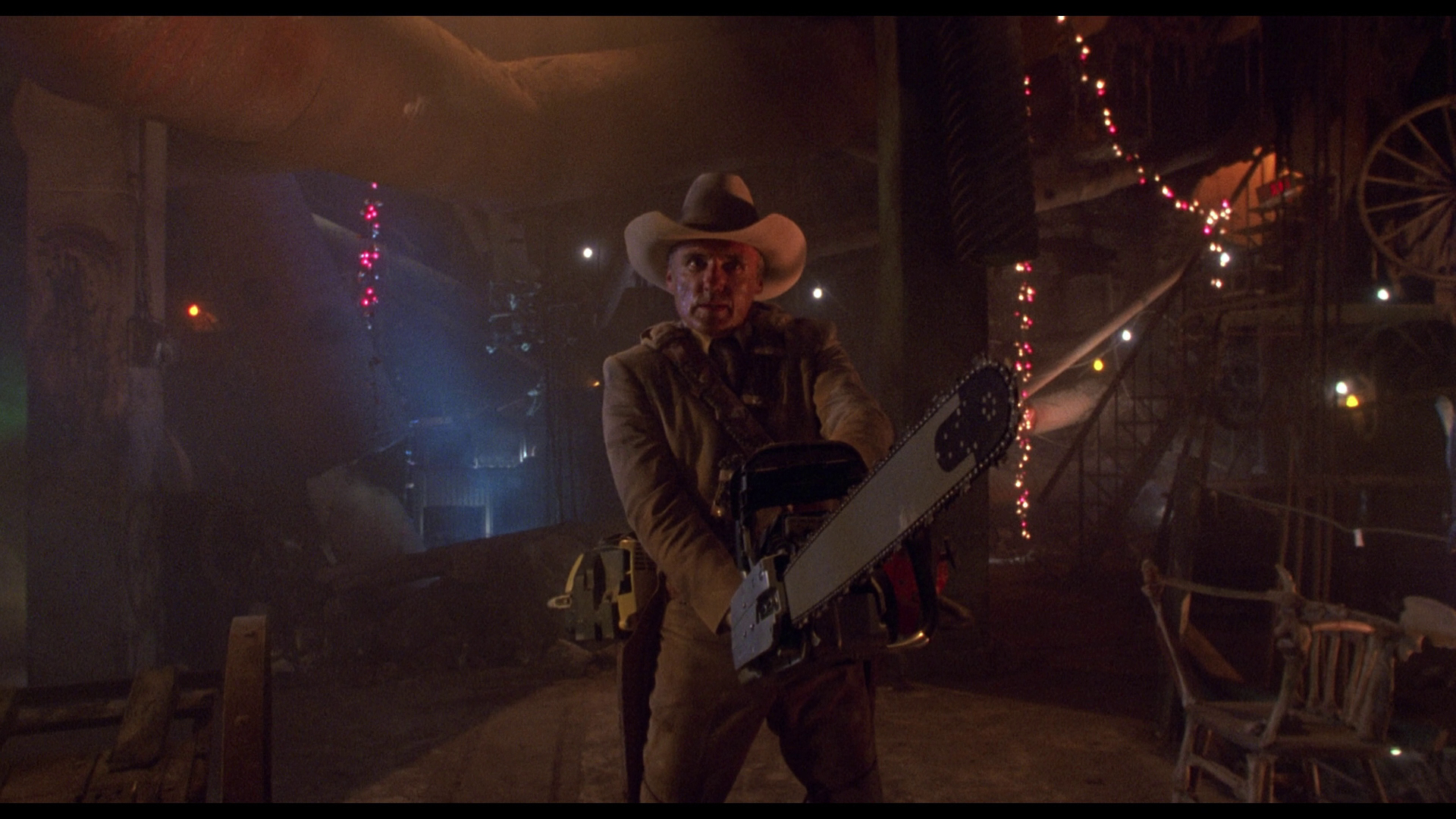 Scream Factory offers a fresh 1.85:1/1080p/AVC-encoded transfer from a 2K scan of the interpositive film element. The results are impressive, and this is certainly the best I've seen the film look. The image is sharp, detailed, crisp, and free of print damage and defects. Colors are nicely saturated, skin tones are natural and black levels are good. Fine-object detail is abundant, as is texture. Wide shots are clean, deep and lack compression artifacts. Most important, the image retains filmic motion, grain structure and clarity. Sure, there is some black crush and heightened grain in darker scenes, but I cannot imagine this looking any better. From the grime on Leatherface's chainsaw to the open roads of Texas to the dark confines of the Sawyer hell farm, every detail is visible and impressive. A+ effort from Scream Factory! For purists, the second disc includes a 1.85:1/1080p/AVC-encoded transfer from MGM's original master, with color correction by Director of Photography Richard Kooris. The new 2K scan looks worlds better (and I was slightly impressed with the MGM master on my older Blu-ray). The MGM image has slight edge enhancement, black crush, too-hot skin tones and messy grain, but it's nice to have both options. See below for some screenshot comparisons.

Scream Factory 2K scan (left). MGM original master (right). Frames are not exactly the same due to the limitations of my equipment. 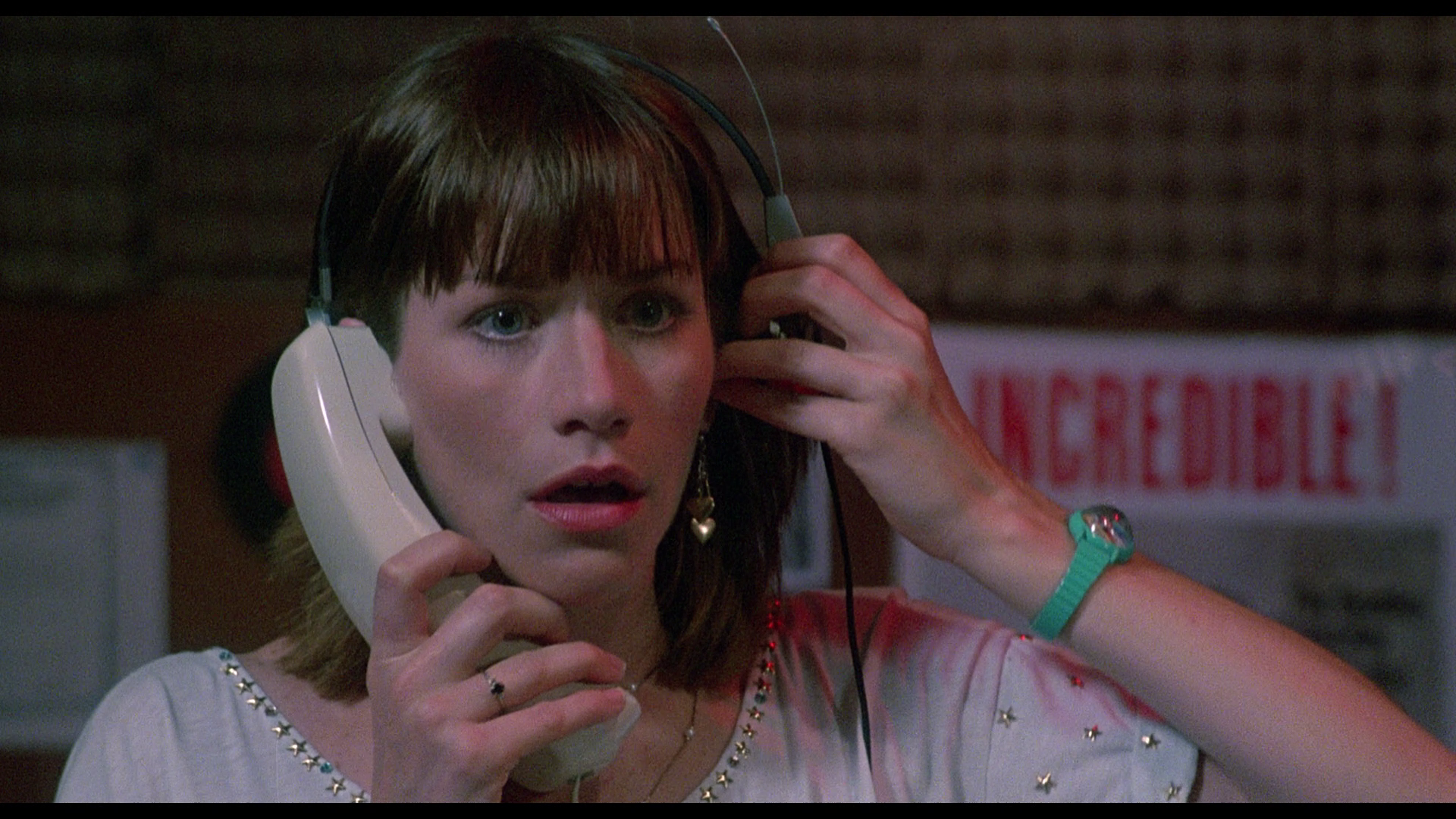 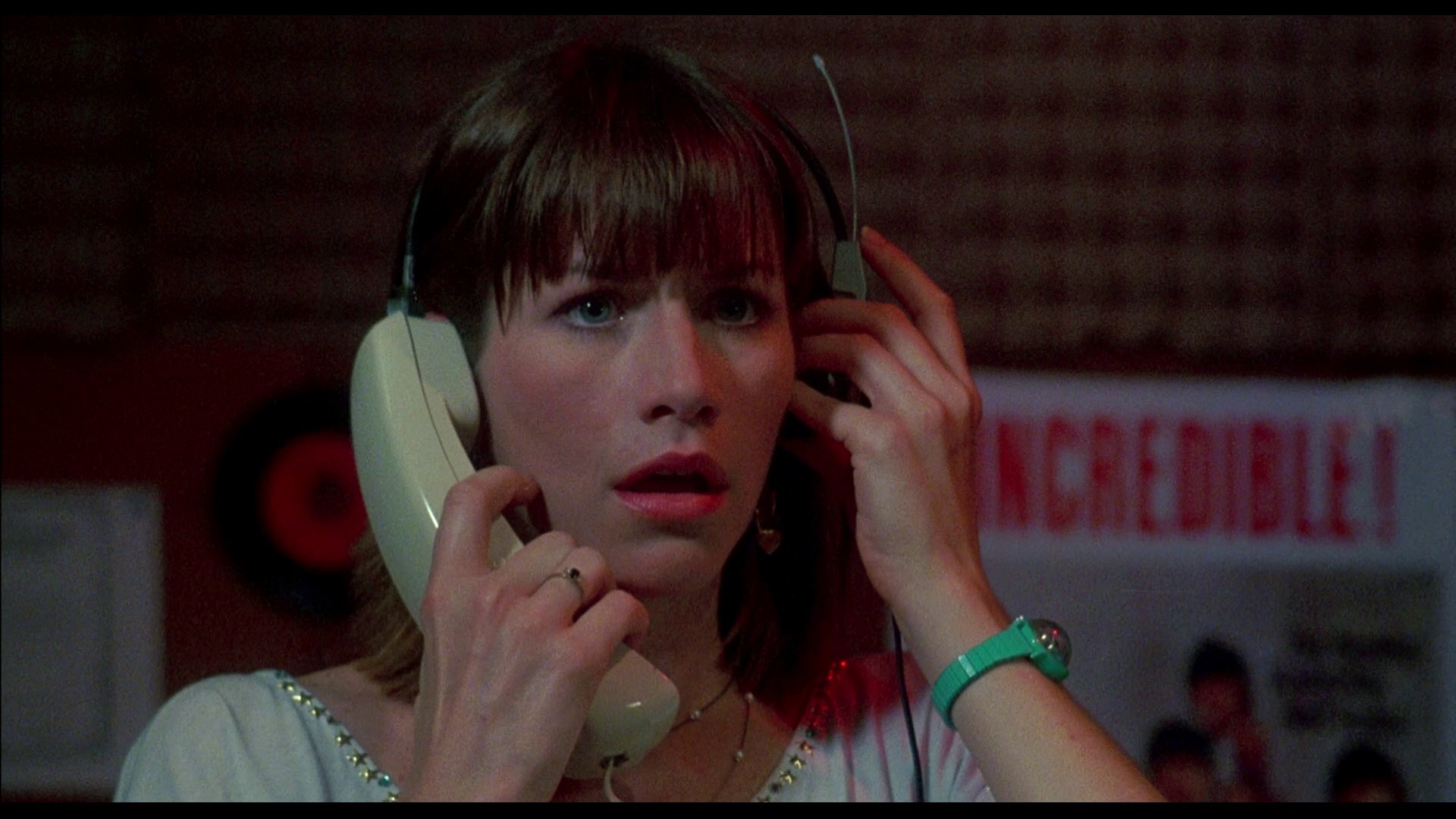 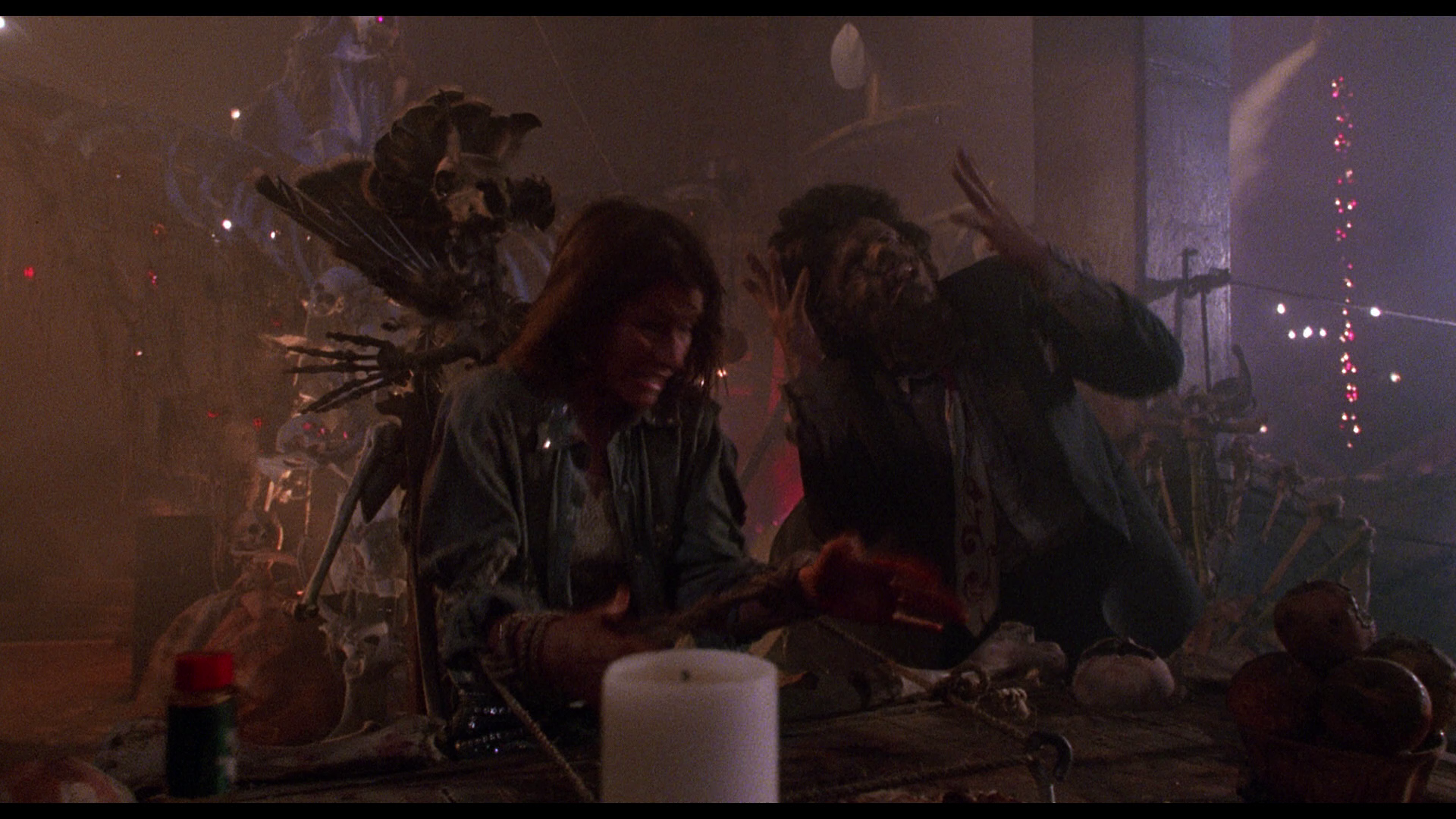 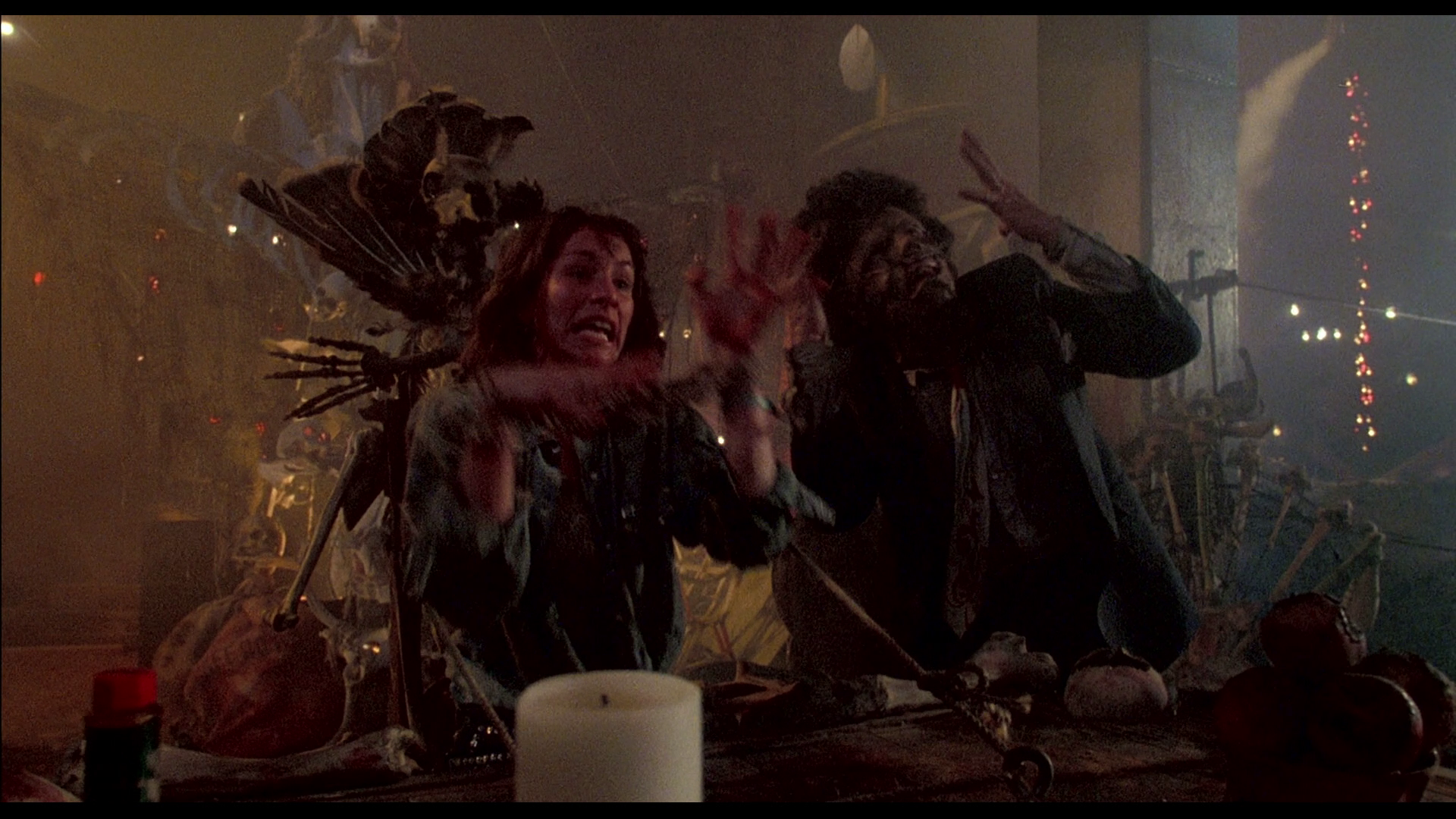 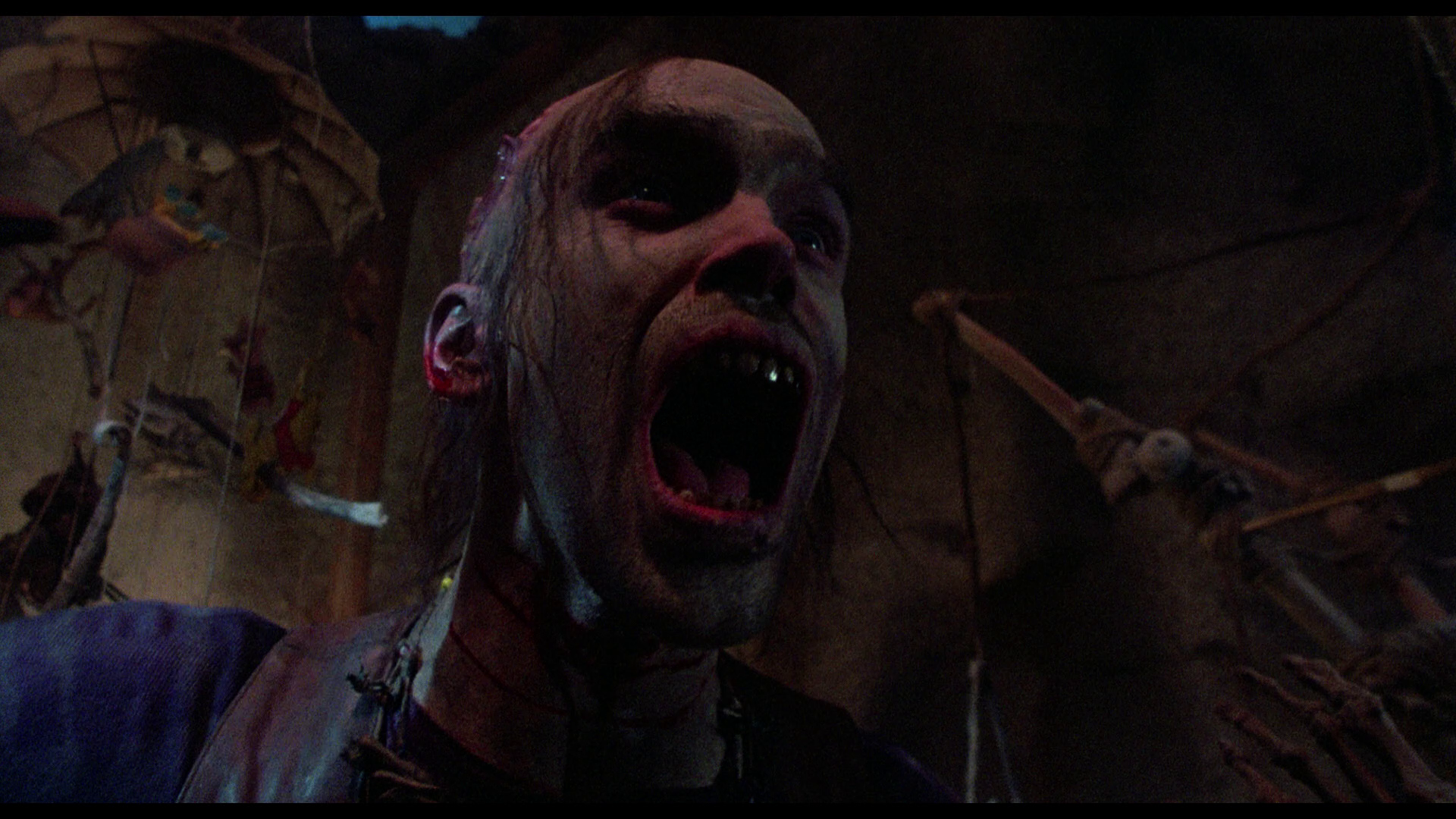 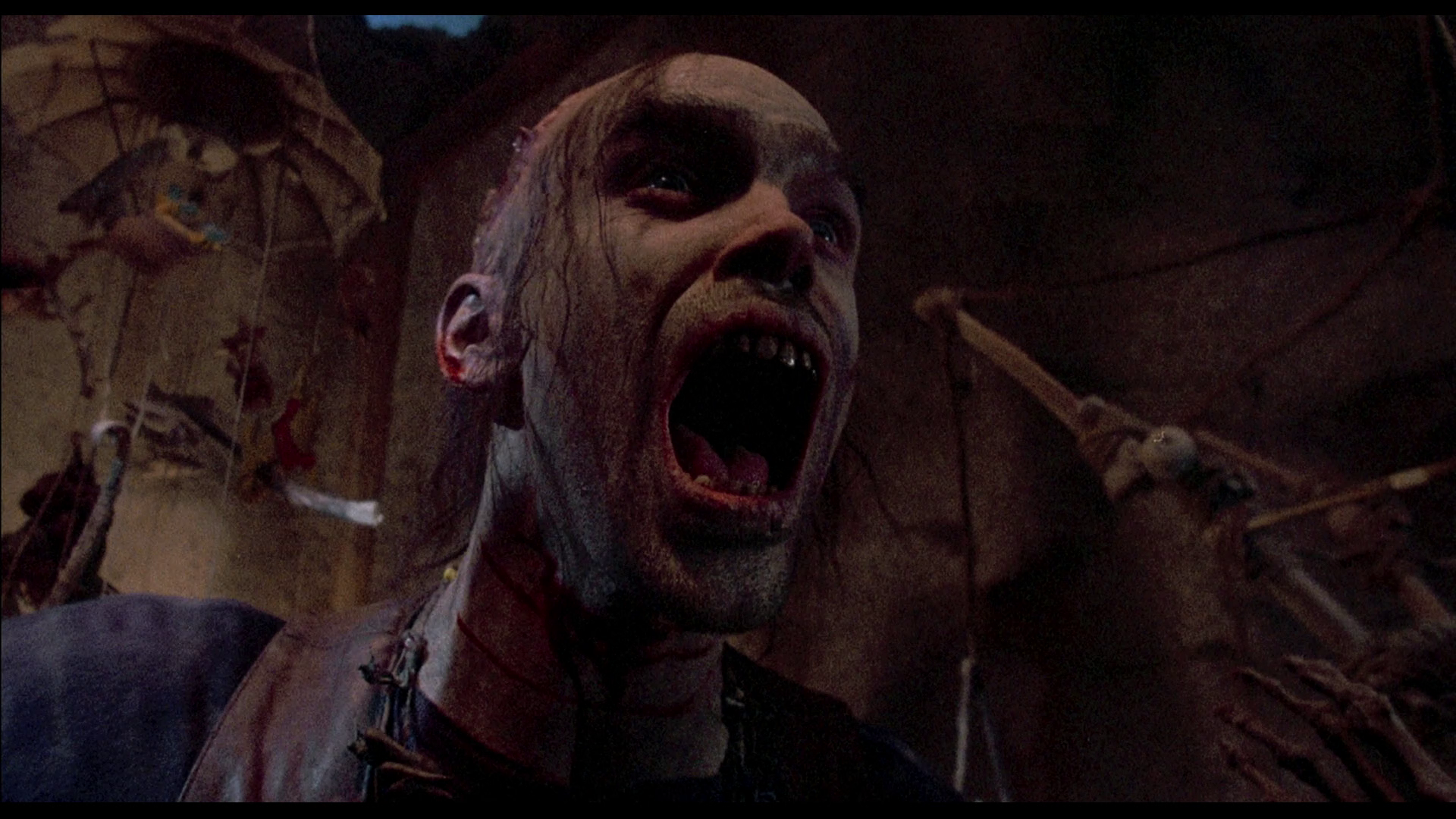 The 5.1 DTS-HD Master Audio mix supports the carnage, with nicely spaced ambient and action effects. The dialogue is crisp and without hiss, distortion or feedback. The score and popular music selections are all properly integrated, and the action bits bring the sound scape to life. Leatherface's chain saw roars through the rear speakers before rumbling the subwoofer and entering the center channel. Effects stingers stun the viewer, and all elements are properly balanced. Scream also includes a 2.0 DTS-HD Master Audio mix to replicate the theatrical experience, as well as English subtitles.

Scream Factory releases a tremendous two-disc Collector's Edition Blu-ray for The Texas Chainsaw Massacre 2. All substantial features from the previous Special Edition DVD and Blu-ray are included, alongside a host of newly minted extras: 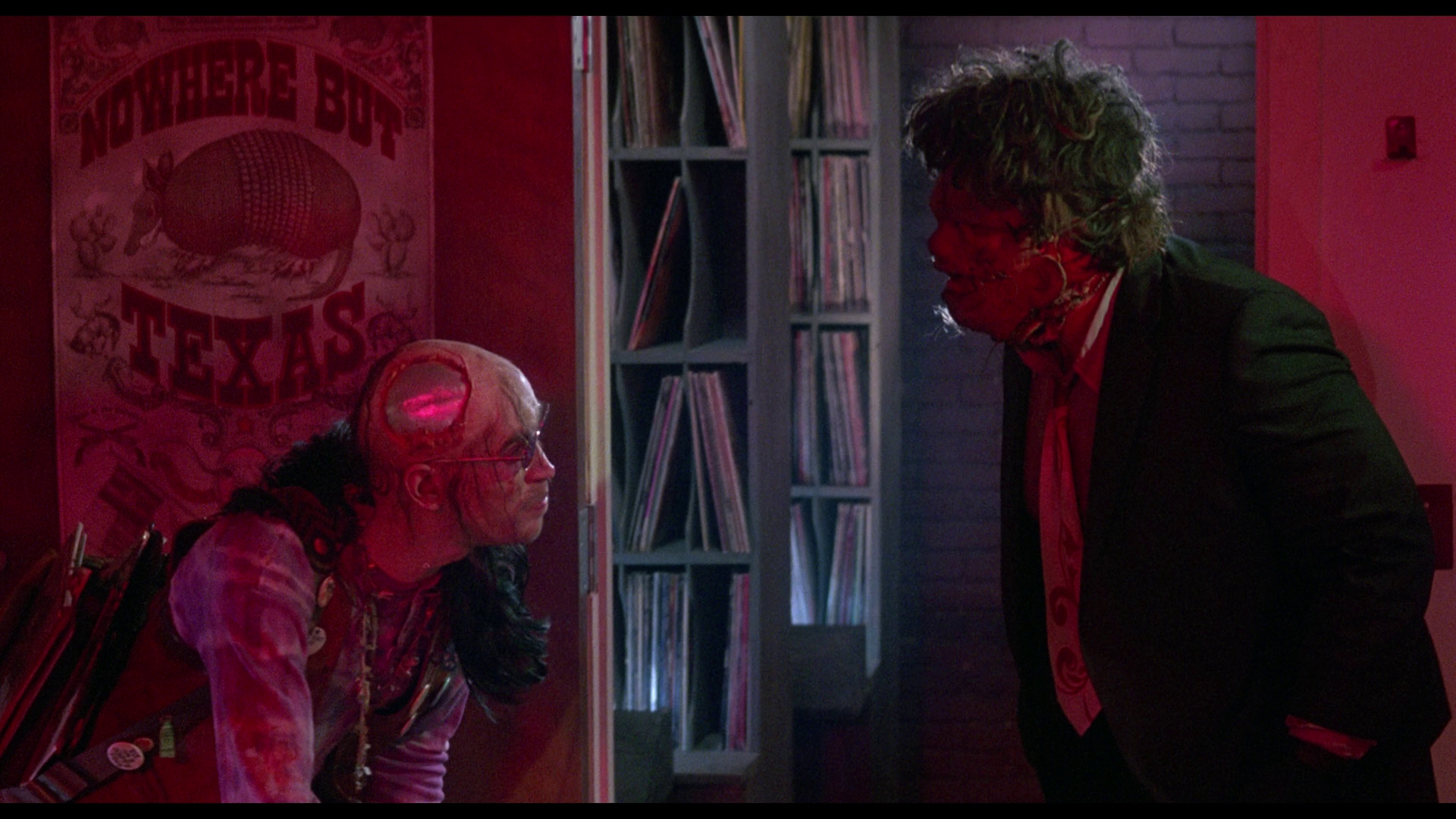 Horror fans will absolutely want to own a copy of Scream Factory's two-disc Collector's Edition Blu-ray of The Texas Chainsaw Massacre 2. Tobe Hooper's follow-up to his legendary horror classic changes tone dramatically, but offers an entertainingly frenetic mash-up of horror and dark comedy. This Blu-ray edition includes a brand-new transfer and a plethora of worthwhile bonus content. Our highest rating is earned: DVD Talk Collector Series. 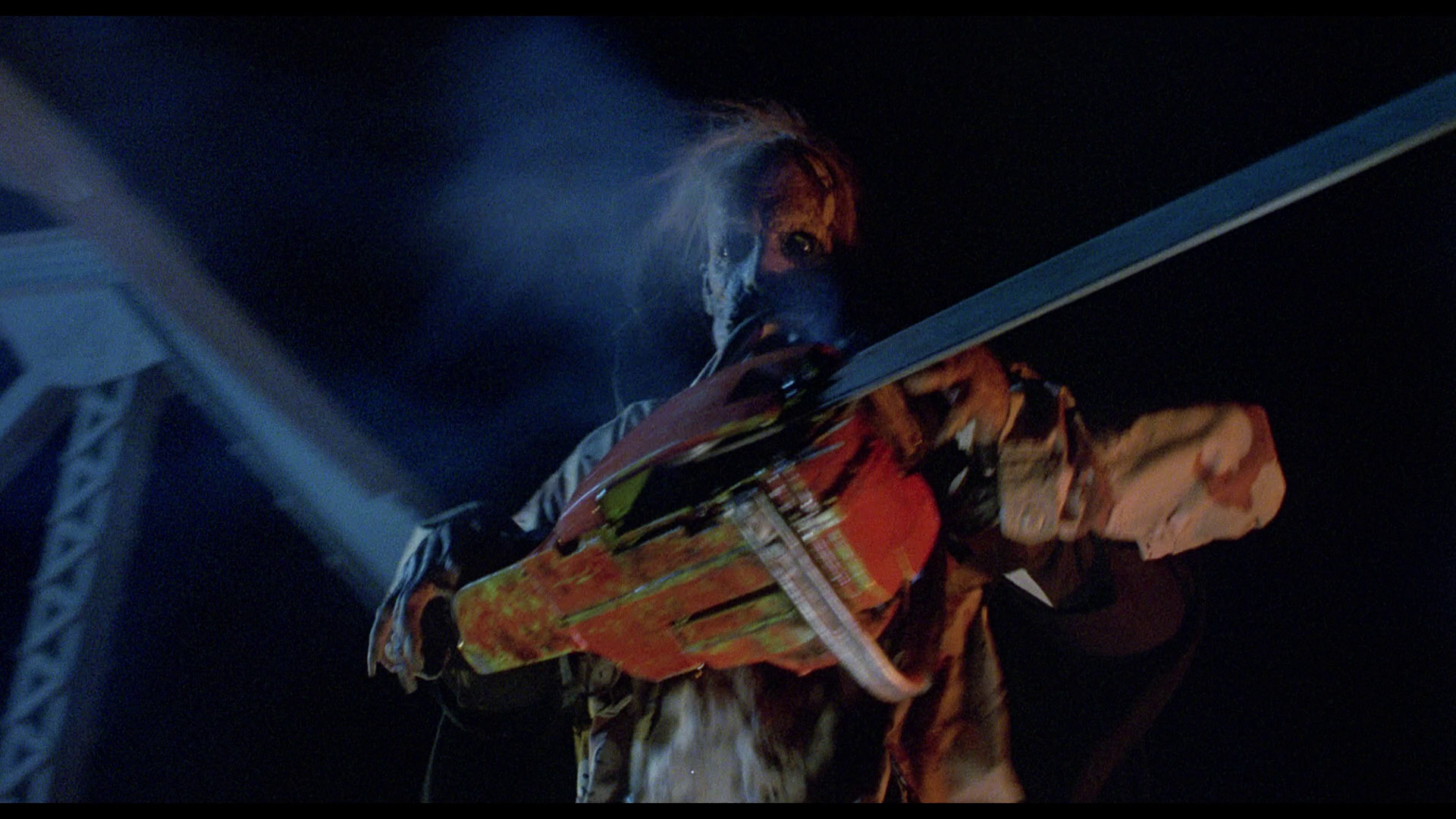 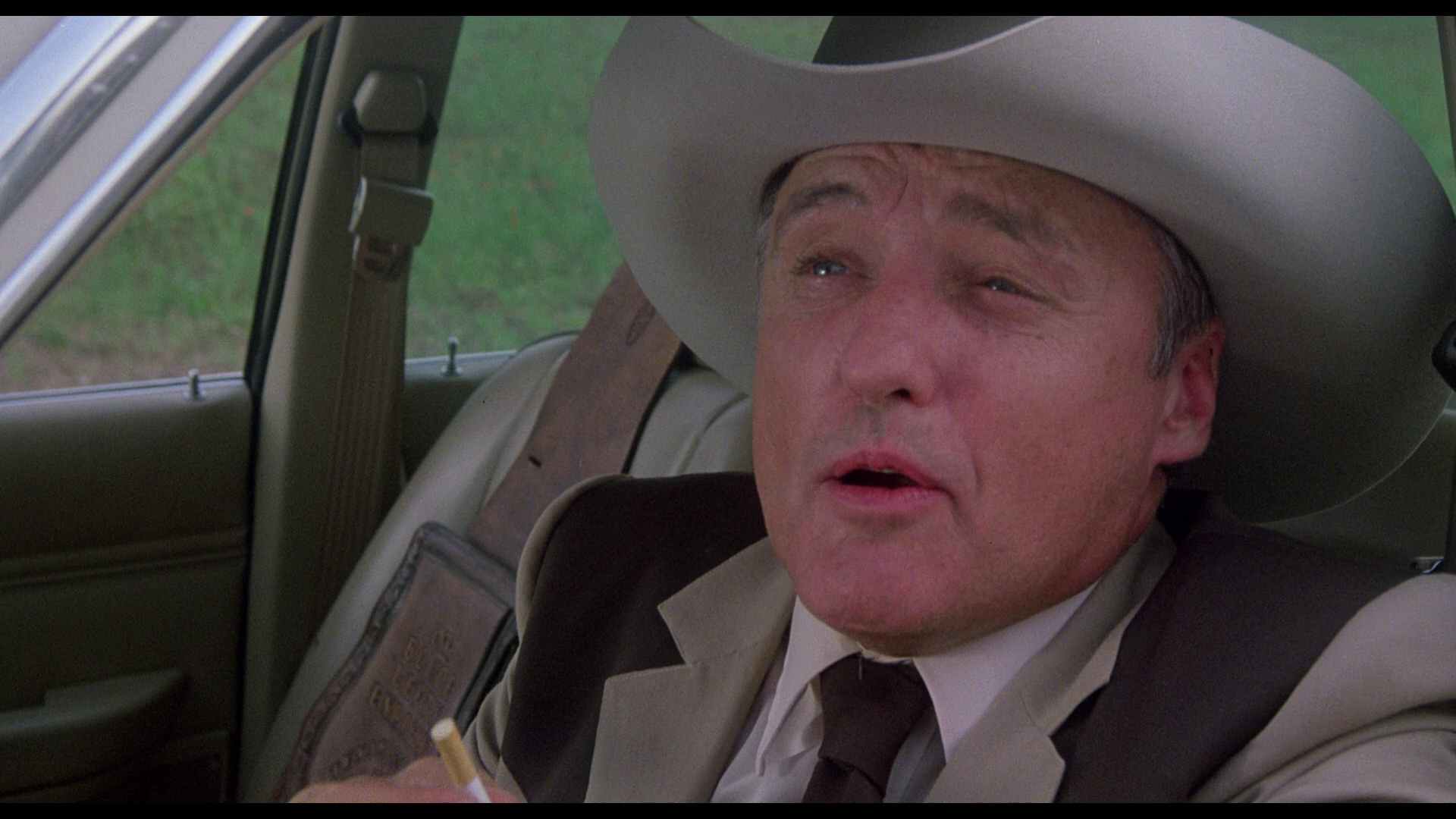 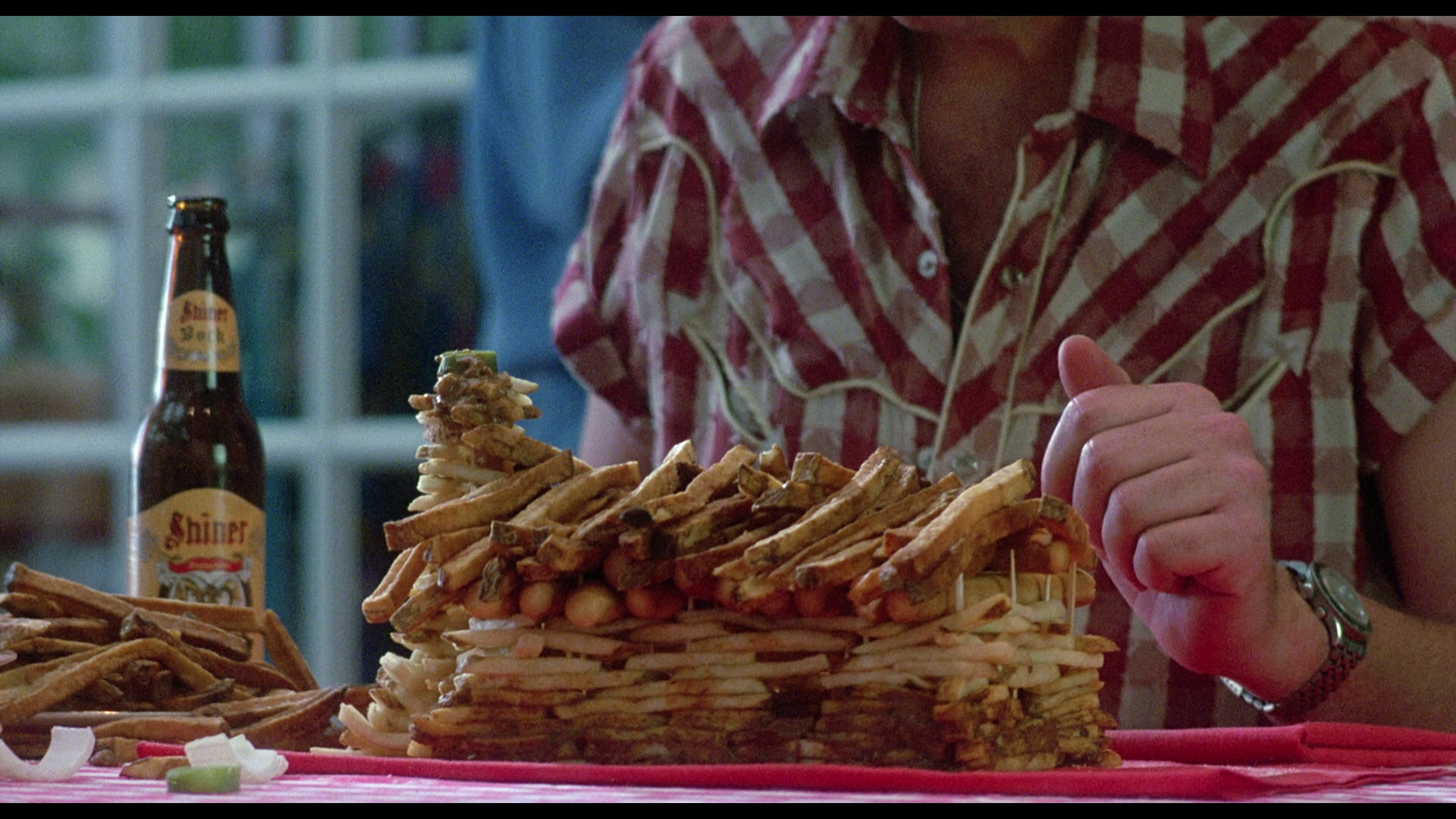 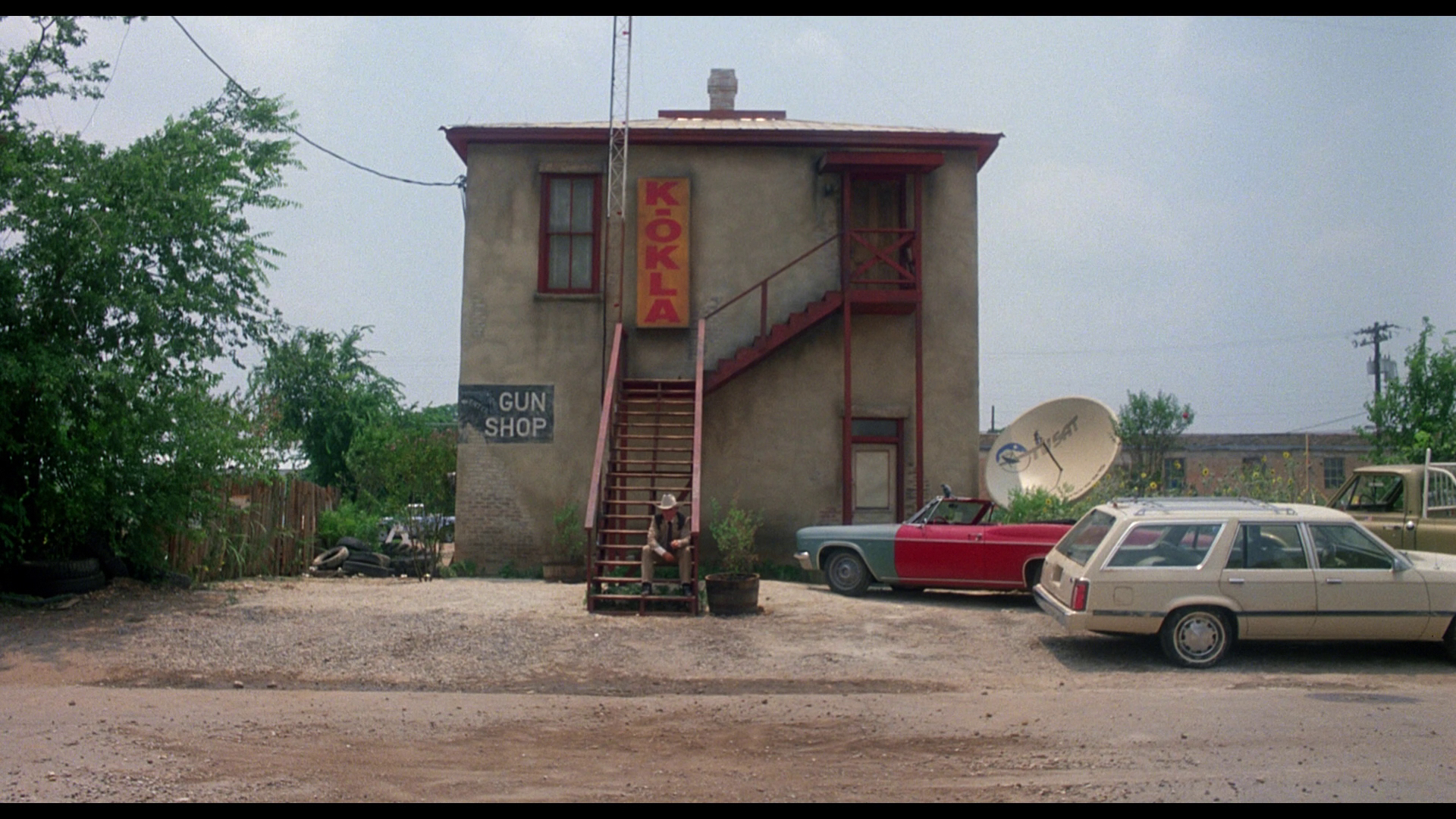 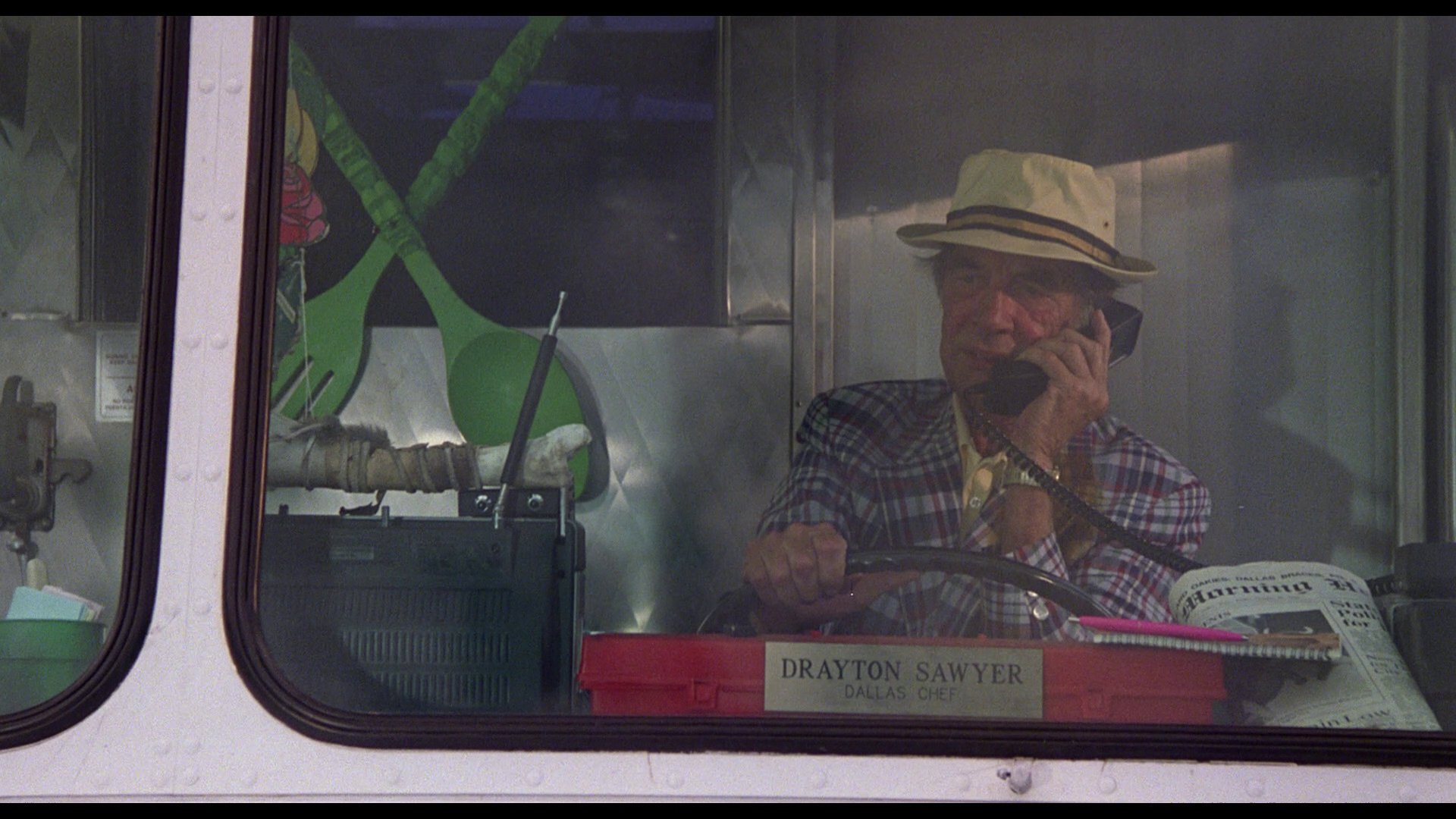 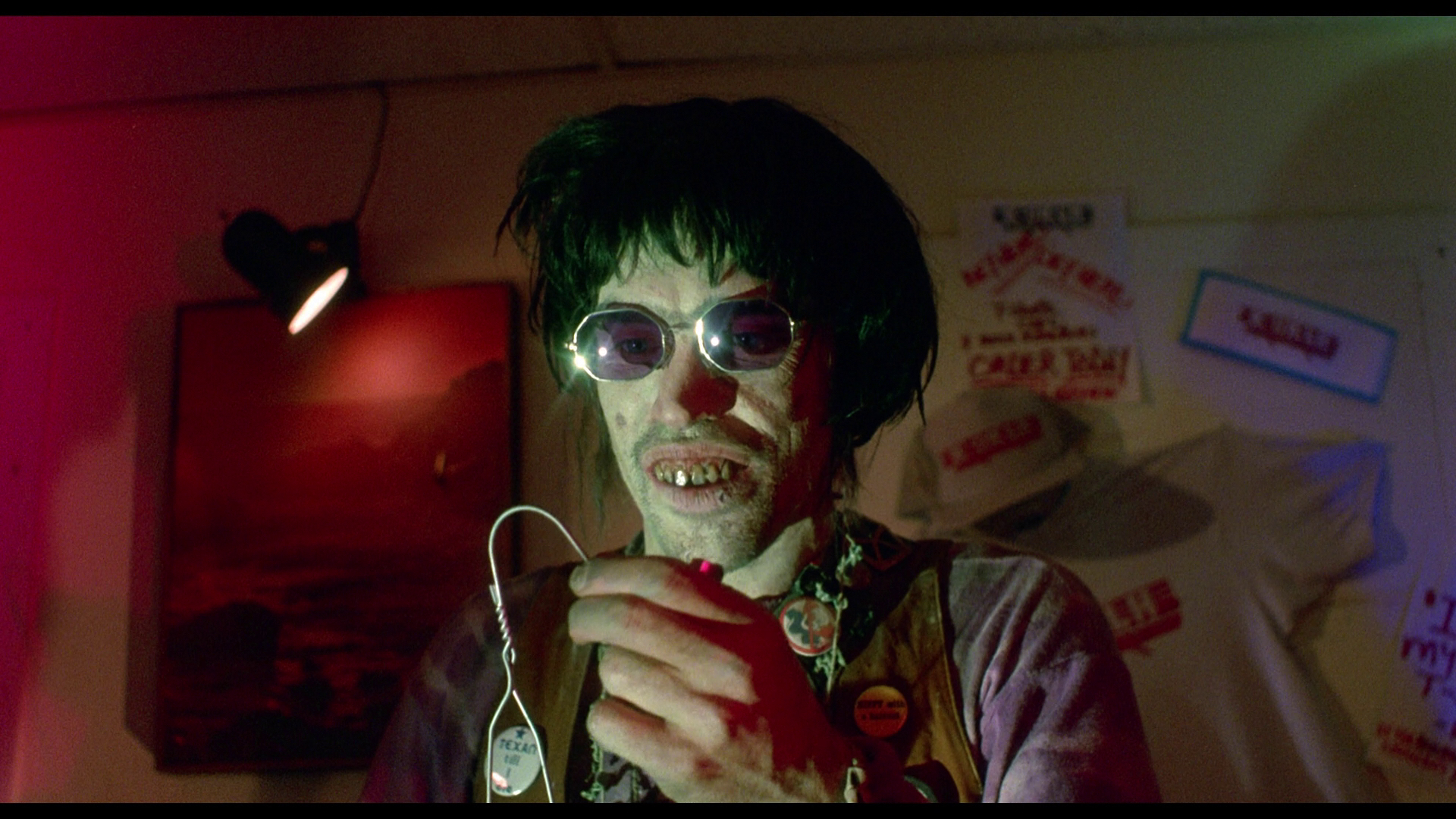 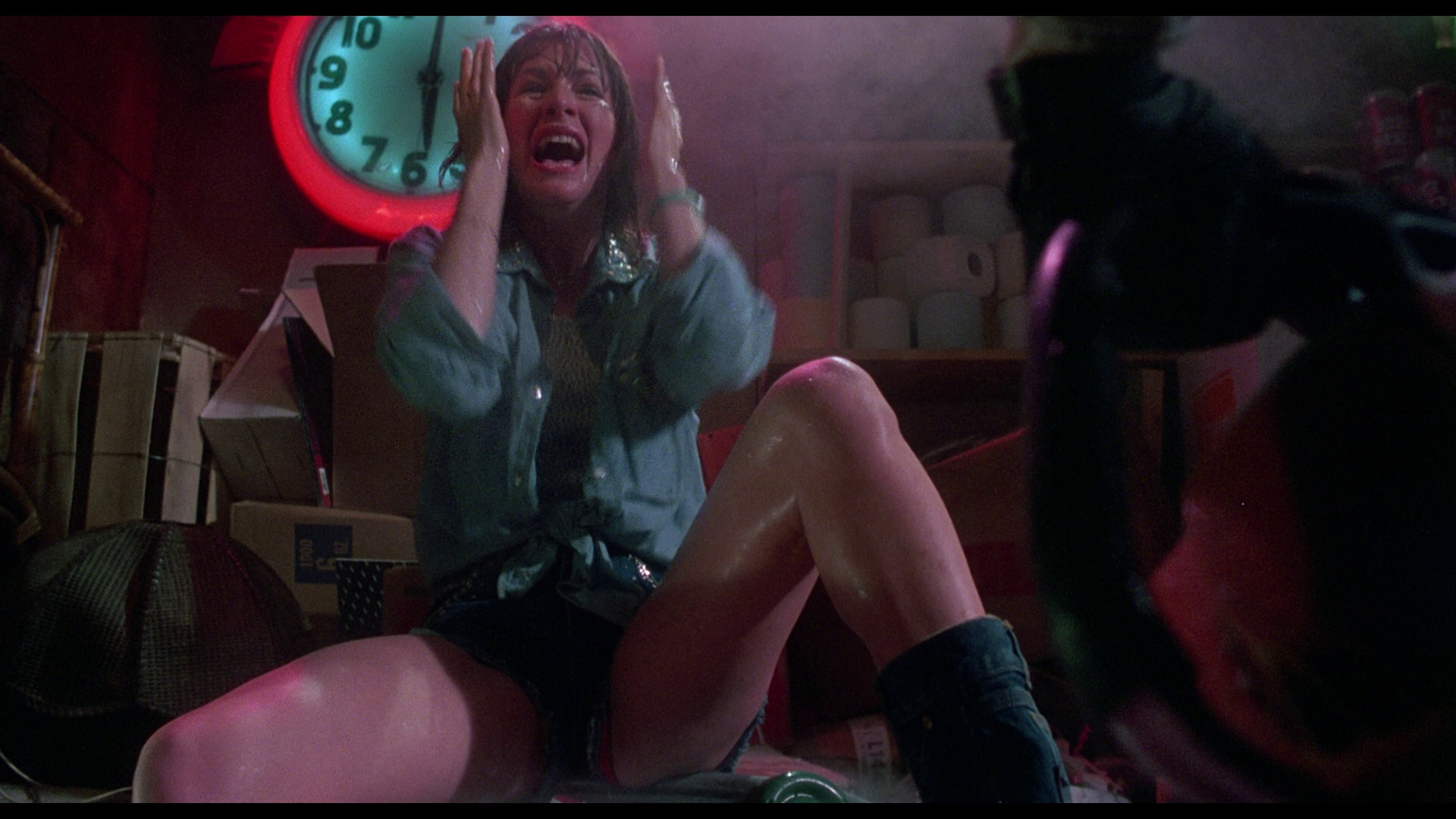 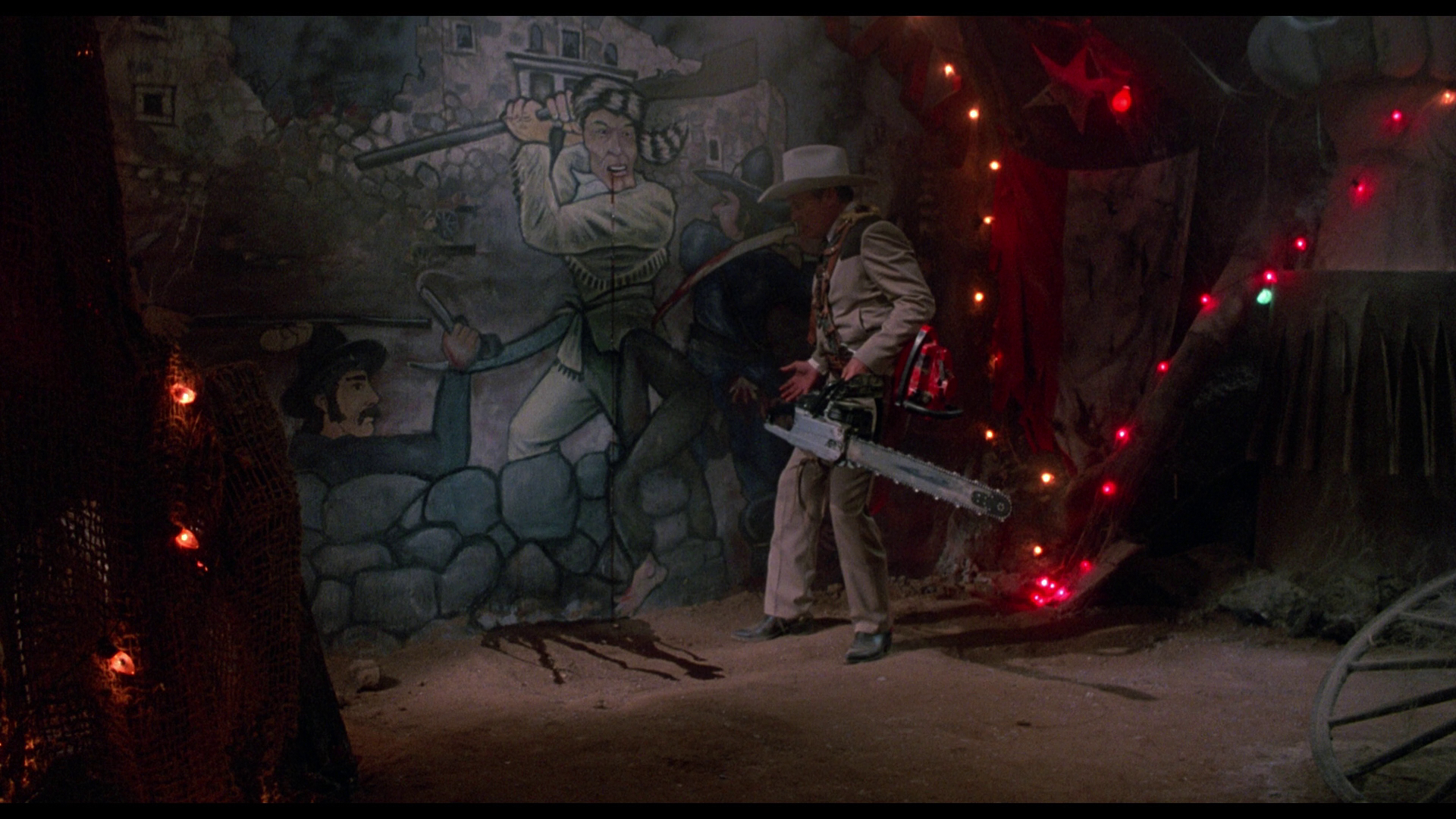 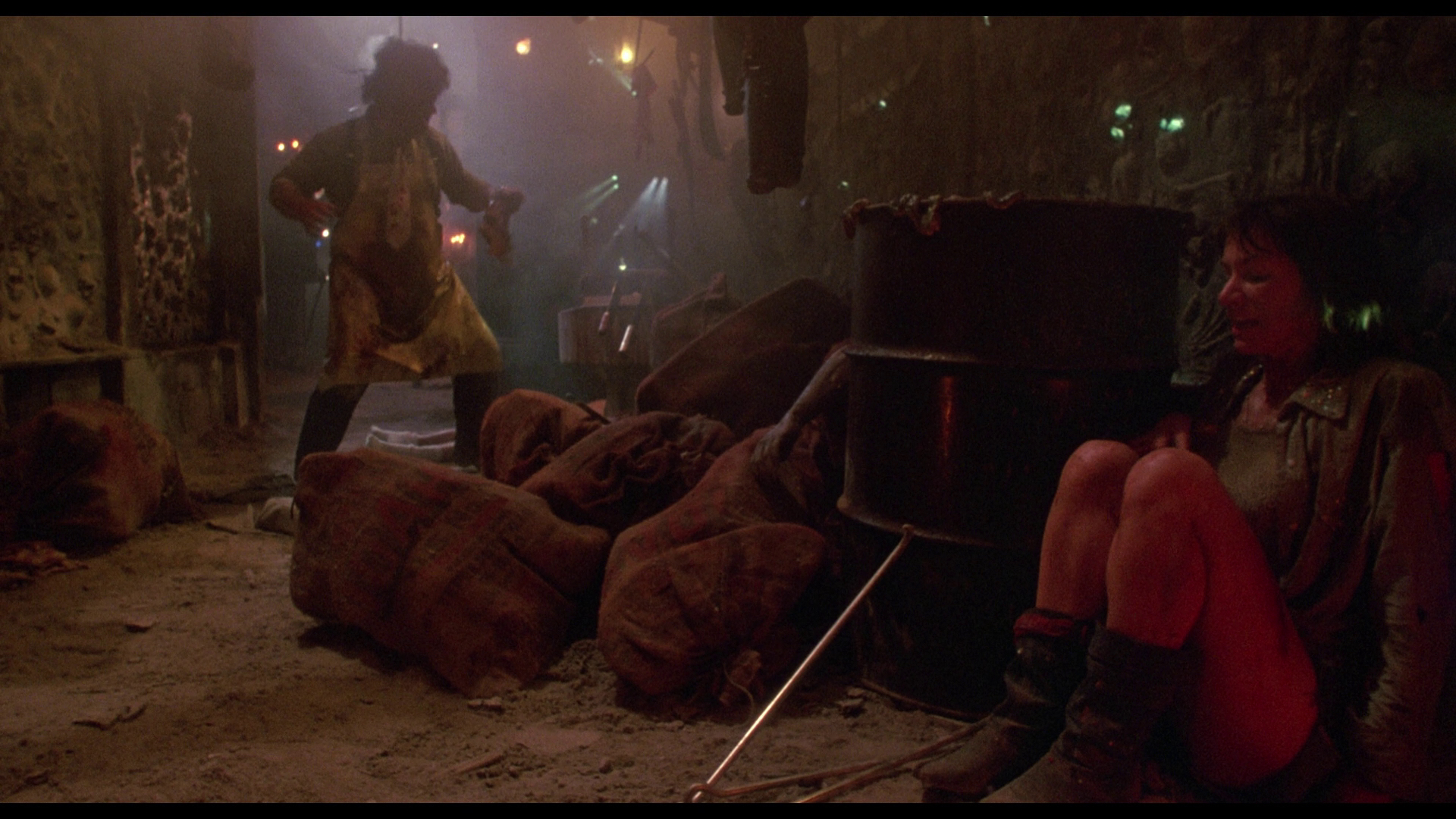 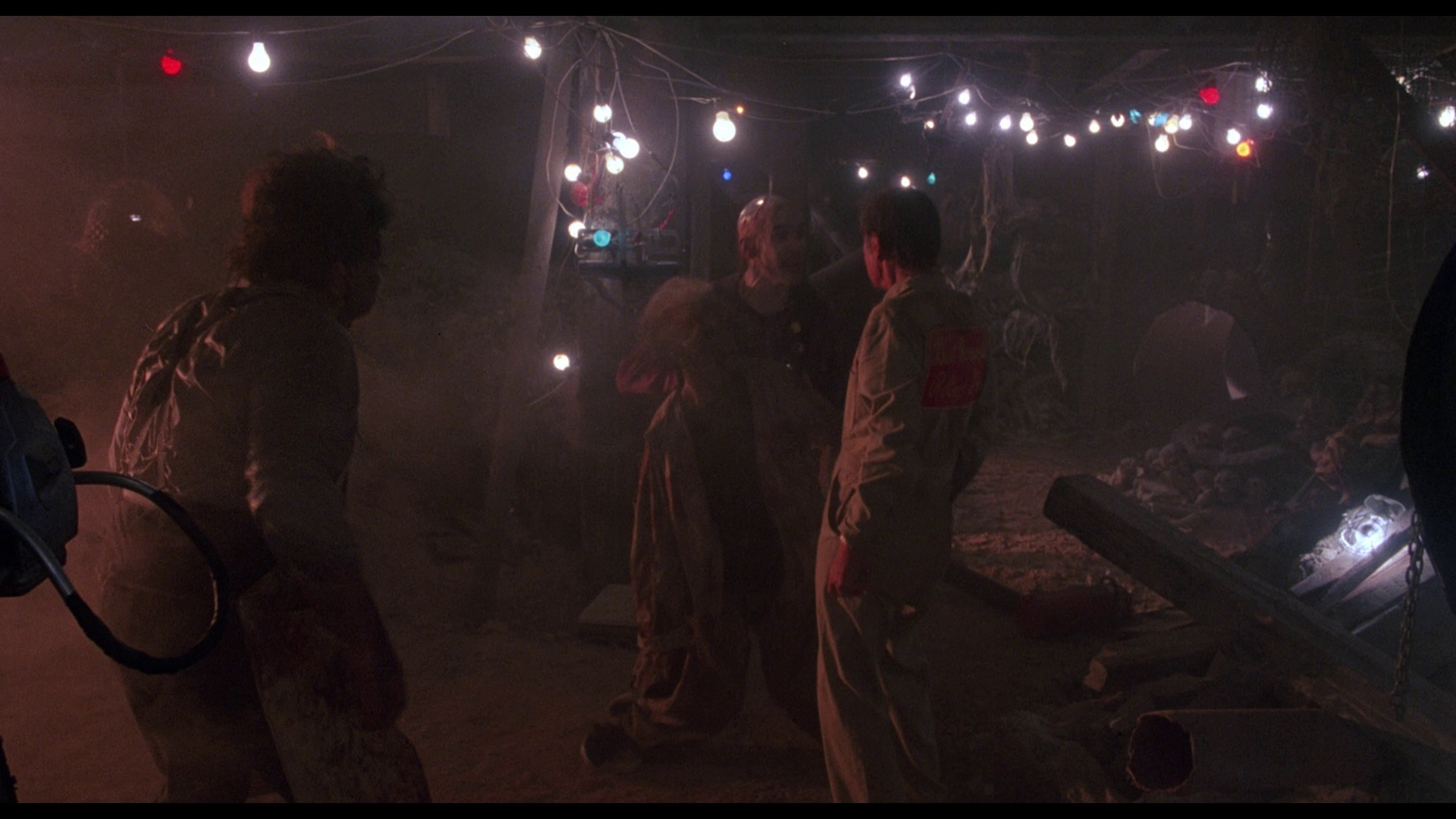 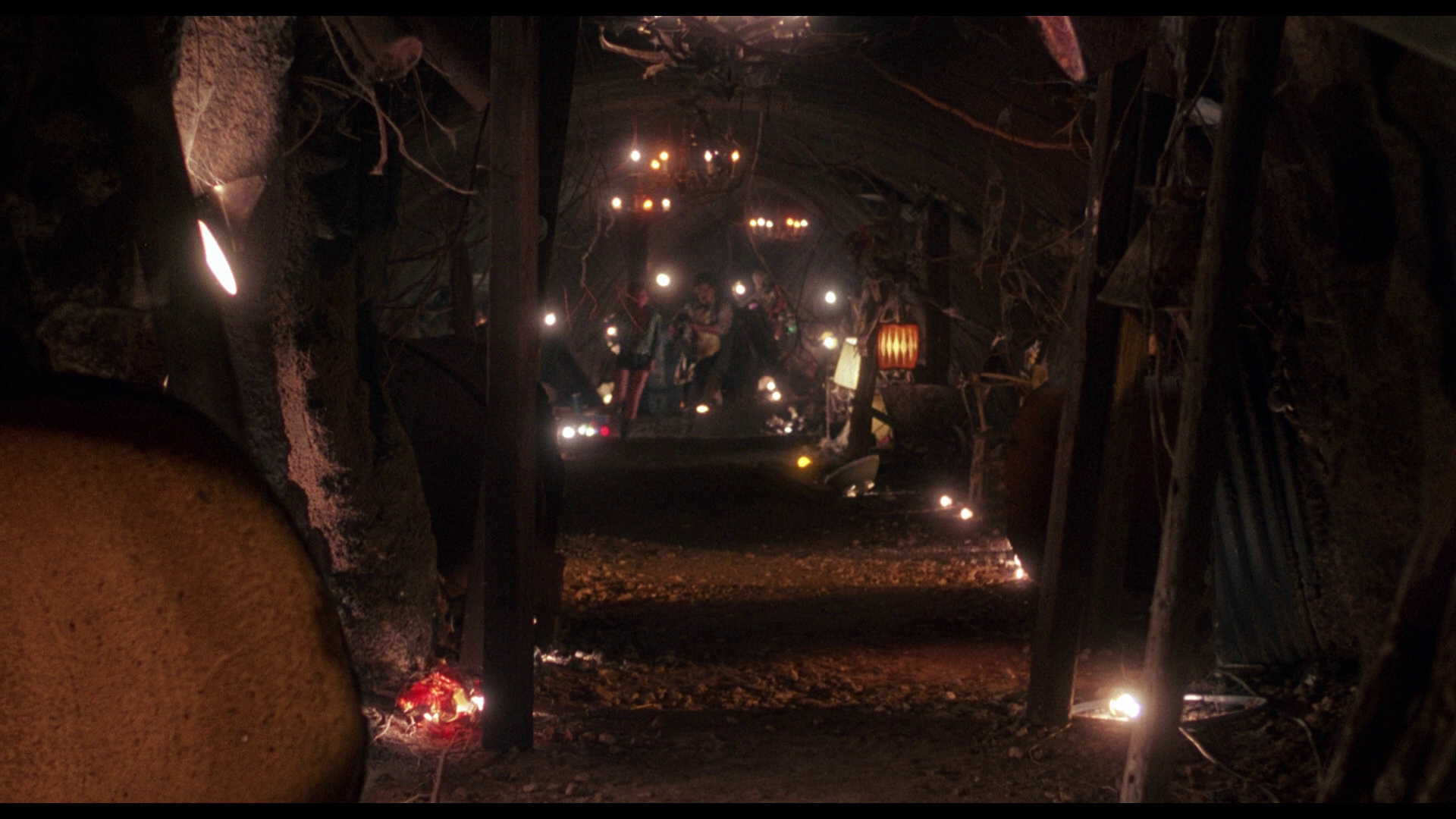 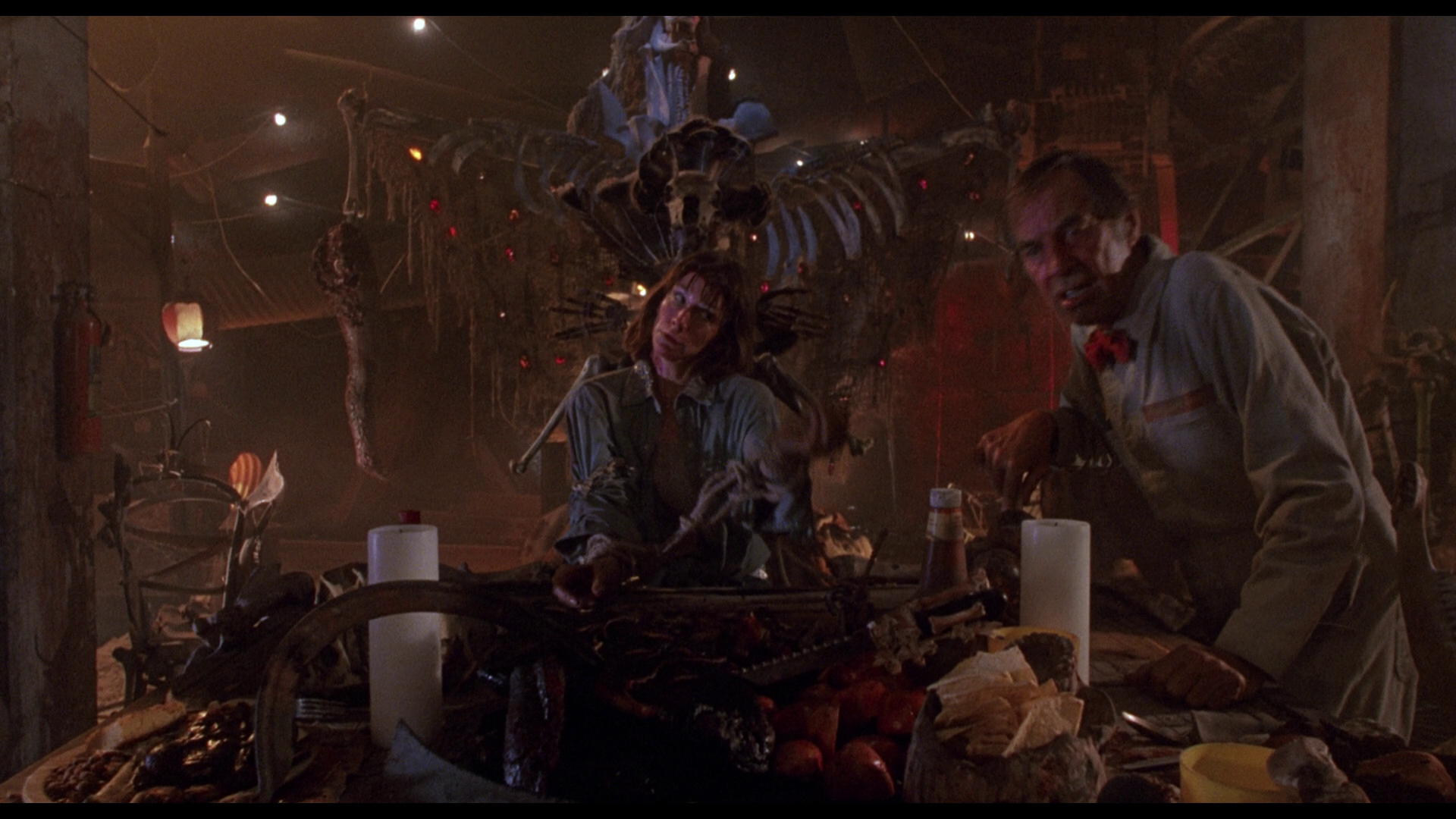