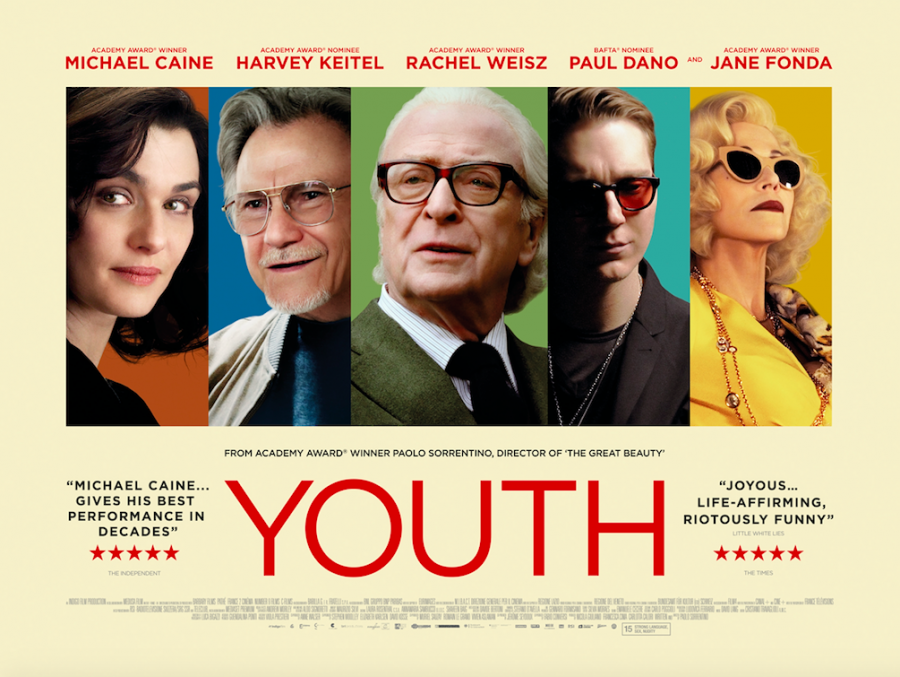 A travelogue of sorts, with beautiful images of the picturesque places visited by its characters, Youth enchants and entertains. Michael Caine is a retired composer; Harvey Keitel is a soon-to-retire filmmaker. Both shack up at a luxury resort in the Swiss Alps amid interesting characters and personal drama. The Grand Budapest Hotel this is not, as Italian filmmaker Paolo Sorrentino focuses on subtle mannerisms and his setting instead of twee humor. Rachel Weisz joins as a newly single assistant to her father/Caine, and Paul Dano plays an arrogant movie star preparing for a big role. Long backstories are inferred through present conversations, and Youth's surprising lack of pretense is its greatest asset.

Seventy-something composer Fred Ballinger (Caine) is not interested in joining the Queen to perform his most famous works. Mick Boyle (Keitel) wants to remind the world he was once a great filmmaker, despite a string of recent bombs. Ballinger's daughter, Lena (Weisz), assists him in doing very little and fumes over a husband shacking up with a pop star (Paloma Faith, playing herself). Jimmy Tree (Dano) is prepping for a film, with Boyle or without, and bristles every time a fan mentions his role as a robot in a big-budget film. All relax at a full-service spa and resort, and the downtime gives each the opportunity to pine for what is lacking in life. Youth dives into surrealism at times, at the behest of the characters. Tree's extended performance as Adolf Hitler may not be reality, and Lena imagines a highly suggestive Paloma Faith music video where her husband (Ed Stoppard), also Boyle's son, w0rships at the altar of British pop.

Sorrentino, known internationally for The Consequences of Love, masterfully leads his actors through seemingly mundane interactions that shed much light on their pasts. Lena equates her failures in marriage to her father's sins, and Boyle tries desperately to lead his writing team out of a creative haze. The background, the Berghotel Schatzalp spa, is surrounded by mountain peaks, lush fields and inviting lakes, and Ballinger and Boyle have returned again to spend time together in contemplation. Boyle is particularly concerned with writing a perfect final scene to his "testament" to secure actress Brenda Morel (Jane Fonda), who eventually arrives to deflate this notion.

This is the second English-language film for the director, and he seems capable at mixing poignant, revealing drama and humor. Caine and Keitel are believable as lifelong friends, and they share intimate moments, like ruminations on their failing prostates, with dignity and frank wit. The human scenery is also colorful, but never so outlandish that it distracts from the story. I particularly liked the vacationing Miss Universe (Madalina Diana Ghenea) who mistakenly approaches Tree about his robot movie. He coldly rebukes her, but later eats humble pie served up by a young fan. The aging leads are at different stages in life. Ballinger wants nothing to do with his legacy; Boyle desperately wants to preserve it. There are heartbreaks for both men, though Youth never oversells these hurdles. The acting here is wonderful, the musical accompaniments effective, and the visuals breathtaking. This is an immersive, dramatic and sometimes whimsical film that I enjoyed very much.

The 2.40:1/1080p/AVC-encoded image is sharp and textured, with miles-deep wide shots and good fine-object detail. This digitally shot production still feels like film, and is pleasantly lacking in waxy faces or blurry pans. Caine and Keitel's charismatic faces are revealed in great detail, and the beautiful Swiss Alps are crystal clear and inspiring. Colors are bold and perfectly saturated, and shadow detail is good. I noticed very minor aliasing and some blacks that pushed toward purple, otherwise this is a fine image.

The 7.1 DTS-HD Master Audio mix is wonderfully immersive, with subtle sound pans and plenty of directional dialogue. The ambient sounds of the resort, like quiet chatter and environmental effects, surround the viewer, and several fantastic sequences awaken the subwoofer and jolt the viewer. Dialogue is clear and without distortion, and the wonderful score and pop accompaniments are perfectly rendered. English SDH, French and Spanish subtitles are available.

This single-disc release is packed in an eco-case that is wrapped in a slipcover. An insert features a code to redeem an iTunes or UltraViolet HD digital copy. The extras are promotional in nature. You get several brief featurettes on specific subjects: Michael Caine (3:43/HD); Paolo Sorrentino (4:11/HD); Cast (3:56/HD); Music and Sound (3:43/HD); and The Essence of Youth (2:10/HD). You also get a Gallery (2:05/HD) and the Trailer (2:27/HD).

Italian director Paolo Sorrentino crafts a wonderfully immersive experience with Youth, which is set at a luxury resort in the Swiss Alps. Michael Caine and Harvey Keitel play aging professionals coping with their fallibility, and the film effectively mixes personal drama, whimsy, visual flair and mood to create an involving experience. Highly Recommended.