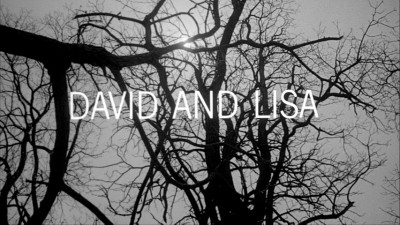 
The Movie
Frank and Eleanor Perry, working together as director and screenwriter respectively, created one of the great freak-out films in The Swimmer, a classic study of a man left behind by society. They first teamed up however on 1962's David and Lisa, a tale of young love (or at least co-dependence) set in a school for the mentally disturbed. Some hints of the greatness to come can be seen, along with the missteps of beginners, resulting in a film that's worth watching, but just doesn't come together as a cohesive whole.

David (Keir Dullea, 2001: A Space Odyssey) is the newest arrival at a school for the mentally disturbed. Though brilliant, he exhibits the behavior that many now assign to a diagnosis of autism, with a lack of filter and a severe reaction to being touched (throwing in a touch of obsessive-compulsive disorder as well.) Extremely standoffish, he refuses to fit in and butts heads with the head doctor (Howard Da Silva.) The only person he makes any kind of connection with is Lisa (Janet Margolin), who has plenty of issues of her own, most notably an inability to communicate outside of rhymes, as well as multiple personalities. An extended getting-to-know you period makes up the bulk of the film, as David is intrigued by her, but held back by his own troubles with connection (as made clear by the dramatic sessions with the terrific Da Silva, which power the character's development.) 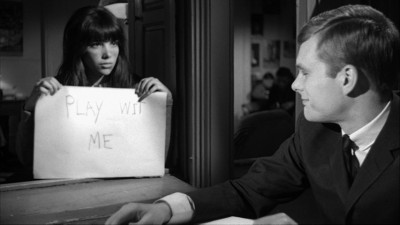 As clean-cut yet intense David, Dullea is something of a prototype for Sheldon from The Big Bang Theory, just far more troubled. There's a dark edge to the character (particularly when he talks about his dreams with the good doctor) and Dullea expresses that well, instilling him with the confidence of a serial killer while maintaining the fragility necessary to properly portray his condition, which is explored in depth. As Lisa, Margolin is the ideal of the troubled teen girl we've seen plenty of in the decades since this film, with pleading eyes and a vacant face, making it incredibly easy to empathize with her. Both Dullea and Margolin sprint up to the edge of exaggerated madness, but neither really approaches the point of overdoing it. Admittedly, I'm no expert in mental illness (a psychology minor only takes you so far) but both performances feel within the boundaries of the believable.

The Perrys coat the story of David and Lisa in a heavy coat of emotion, with a feeling that something bad could happen at any point, as disturbing dream sequences, family strife and a sense of us-versus-them drama unfurl. However, there's not much payoff to this atmosphere. Certainly, this means the film avoids playing into stereotypes, but it does leave the viewer hanging. The pacing could certainly be better, and that the film feels like a television show, with episodic story beats punctuated by fades to black, doesn't help. The stop-start rhythm, with a number of monologues and deep conversations, makes the film feel like it was instead written for the stage (and a theater adaptation did in fact come years later.) As a result, momentum is at a minimum, and when it's all over you can find yourself thinking "That's it?" And yes, it is. At least until The Swimmer. 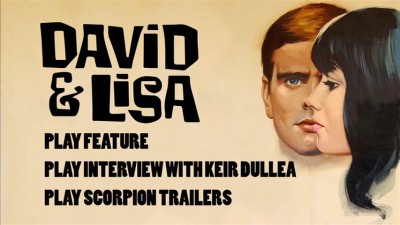 The DVD
The film arrives on one DVD, which is packed into a standard keepcase. The disc offers a static, anamorphic widescreen menu with options to play the film and check out the extras. There are no audio options and no subtitles.

The Quality
The 1.78:1 anamorphic widescreen black and white transfer is struck from a new HD master from original source materials, but the resulting image has a good deal of notable dirt and damage, as well as some obvious jitter. The level of fine detail is good for the most part, and the sharpness is solid for the most part (some scenes have an oddly uneven blurriness), and the black levels are good as well. There's a level of noise present in some interior scenes that becomes distracting in sports, but it's not a consistent problem (which makes it more obvious when it does appear.)

The Dolby Digital 2.0 audio, which dupes the film's mono soundtrack on two channels, does the trick for the film's dialogue and moody score, and handles background noise, including ambient voices, quite well. Nothing about this mix stands out as problematic.

The Extras
The main extra is a 41:38 interview with Dullea, in which he looks back at the experience of making the film and discusses his career on film and stage, including his work on 2001: A Space Odyssey. Dullea is candid as he reminisces about working with various actors and directors, including Angelina Jolie and Stanley Kubrick, and even talks about what he considers his worst films. For cinephiles and fans of Dullea's work, it's an enjoyable trip down memory lane.

The other extra is a selection of trailers for other Scorpion films (17:07), with previews from Angel Baby, The Girl Hunters, Saint Jack, Quest for Love, Firepower, The Dirt Bike Kid and The Last Days of Chez Nous. There are some really interesting-looking films represented here, especially with Saint Jack's Peter Bogdanovich-hosted clip. 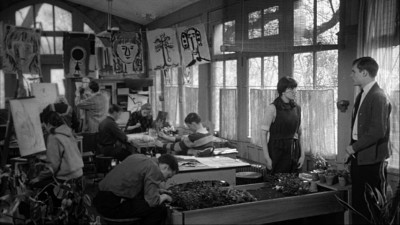 The Bottom Line
David and Lisa is a prime example of a film with a stronger concept than execution, a character study lacking in plot. Though Dullea and Margolin both make you want to keep watching, you're not rewarded for following that instinct. The presentation is good, but flawed visually, though the extended interview with Dullea is a welcome inclusion. Fans of the Perrys' later work might want to take a look to see where it all got started, but this film is more a curiosity than a must-see.