Tale of Two Cities, A

Not a quote from a 2016 Bernie Sanders speech but rather the famous opening lines of Charles Dickens's A Tale of Two Cities (1980), here adapted as a big-scale Hallmark Hall of Fame television movie. Generally good, it's interesting mainly for its cast of mostly British talent. It was actor Kenneth More's last film, nearly Flora Robson's last, and a late-career triumph for actor Peter Cushing, who after the 1970s didn't work all that much. It was David Suchet's first feature, nearly a decade before his signature role as Hercule Poirot; and it was the first feature of Alice Krige (Chariots of Fire, Ghost Story), playing an angelic ingénue part far removed from the darker, villainous roles for which she is better known. Chris Sarandon stars, with Barry Morse, Billie Whitelaw, and Nigel Hawthorne in solid support.

Shout! Factory's Blu-ray, licensed from ITV, presents the 162-minute film in 1.78:1 widescreen. Though it premiered on U.S. television, it appears to have been shot and framed with a concurrent theatrical release in other markets in mind, so compositions don't appear cramped at all. No extras. 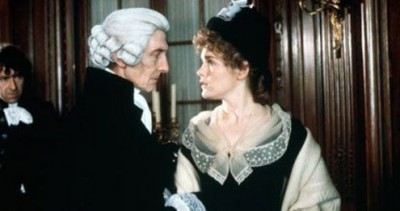 The two cities are, of course, London and Paris, before and during the French Revolution. In England, banker Jarvis Lorry (Kenneth More) informs virginal Lucie Manette (Alice Krige) that her father, long-thought-dead French physician Dr. Alexandre Manette (Peter Cushing) has been found alive after more than 16 years of wrongful imprisonment at the Bastille, in solitary confinement. Jarvis and Lucie, accompanied by her ancient governess, Miss Pross (Flora Robson), arrive at the wine shop of Ernest Defarge (Norman Jones) and his firebrand of a wife, Therese (Billie Whitelaw), where Dr. Manette is being looked after. Lucie finds her father emaciated, filthy, and nearly senile, but eventually he recognizes her and begins his long recovery back in England.

Meanwhile, French aristocrat Charles Darnay (Chris Sarandon), disgusted particularly by the behavior of his reprehensible uncle, the Marquis St. Evrémonde, (Barry Morse), who in the film's opening scene blithely tosses a few coins at the father of a child his coach runs over and kills, immigrates to England. However, British spy Barsad (David Suchet) falsely accuses him of treason. During the trial, Charles's barrister, Stryver (Nigel Hawthorne), cleverly calls into question Barsad's eyewitness testimony by producing Sydney Carton (also Sarandon), an alcoholic barrister who could be Charles's identical twin. (As reader Sergei Hasenecz points out, "In Dickens's novel, Carton and Darnay are not almost identical, but do have a resemblance to one another. Notably, Selznick had wanted Colman to play the dual role in the 1935 version, but Colman, perhaps out of loyalty to Dickens, declined.")

Both Charles and Sydney fall in love with Lucie, she eventually marrying the former. Following the storming of the Bastille and even while aristocrats are being guillotined, Jarvis plans a trip to collect documents from his bank's Paris branch. At the same time, Charles learns that Gabelle (Gerald James), an old family servant, has been arrested and Charles, feeling responsible for the man's welfare and at great personal risk, decides to accompany Jarvis in hopes of freeing the unjustly imprisoned man. Unfortunately, Charles is arrested almost as soon as his feet touch French soil. Lucie and Manette soon follow, the latter hoping to use his influence to secure Charles's release.

American-financed but shot in both England and France with a British director (TV helmer Jim Goddard) and British and French crew, this A Tale of Two Cities is on one hand quite lavish with its excellent cast, big sets, elaborate period costumes, and large set pieces featuring scads of extras. But it also lacks the masterly compositions, blocking, cutting, etc., of the more stately movie epics of historical dramas. This isn't really a complaint as, no doubt, the money and time allotted were undoubtedly puny compared to a feature movie of comparable scale, but it does leave the viewer wishing it could have been just a bit more polished than it is.

Overall, however, it's a solid adaptation, surprisingly one of only three shot on film since the silent era, the other two being the 1935 American film with Ronald Colman, the second being the excellent 1958 British version with Dirk Bogarde. In both of those, Colman and Bogarde played Sydney Carton but not Charles Darnay, essayed in each case by other actors. Here, Chris Sarandon (Dog Day Afternoon, Fright Night) plays both and the special effects and blocking are clever enough that the casual viewer might not even notice one actor is playing both parts. Sarandon's good performances support the illusion but their doppelganger resemblance also pretty much gives away the entire last third of the story, though in this version it's still pretty powerful.

Parkinson's Disease forced the retirement of Kenneth More, a superlative actor in both comedies (Genevieve, Doctor in the House) and drama (A Night to Remember, The Greengage Summer). He's excellent here and showing no obvious signs of the illness that would kill him just two years later. Peter Cushing, meanwhile, was curiously unable to capitalize on the biggest success of his career, as Darth Vader's boss in Star Wars (1977), though he hated working outside his beloved England and, apparently, turned down many offers. In one sense his role here brought him full circle, returning him to the medium that first brought him fame. As Dr. Manette, Cushing, pretty old and emaciated himself, is exactly right for the part, and is alternately moving and stirring as the contrastingly pathetic ex-prisoner and articulate gentleman haunted by his terrible experiences.

Presented in 1.78:1 widescreen, A Tale of Two Cities looks just okay. The transfer is rather blah, with unexceptional color, sharpness, and contrast, looking derived from secondary film elements. The DTS-HD Master Audio (English mono, with optional subtitles for the deaf and hard-of-hearing) fares a bit better. The disc is Region A encoded and offers No Extra Features.

Not particularly distinctive beyond its cast but still quite good and definitely worth seeing, A Tale of Two Cities is Recommended.