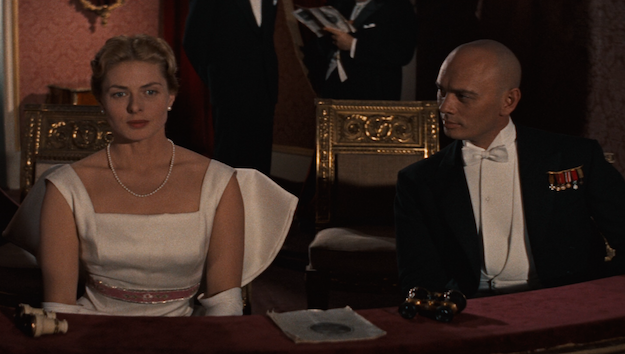 In 1956, Ingrid Bergman's seven-year exile from American movies was ended with Anastasia, a handsomely mounted period drama that would earn her a second Best Actress Oscar. Bergman's absence from U.S. screens was a result of her decision to leave her first husband and daughter, to pursue a relationship with Roberto Rossellini in Europe. The ensuing scandal was massive enough to derail her career over here (even though the films she made with new husband Rossellini are now considered classics worldwide).

Bergman's real-life baggage informs her performance in Anastasia, as an amnesiac and possible madwoman whose desire for an identity and some kind of acceptance gets her roped into a scheme to pose as the presumed dead Grand Duchess Anastasia Nicolaevna. Anastasia was the youngest daughter of Tsar Nicolas II, who was executed along with his family during the Russian Revolution. Rumors persist that Anastasia escaped, and with a giant inheritance waiting for her in an English bank, White Russian General Bounine (Yul Brynner) and his quirky partners (Akim Tamiroff and Sacha Pitoëff) decide to go after that money. When we meet this trio near the start of the film, they have already tried and failed to mold a handful of different women to look and act like Russian royalty. Their financial backers are ready to withdraw support if a Grand Duchess is not produced within eight days, so the desperate con men select former mental patient Anna (Bergman) as their Hail Mary play.

Anna bears some resemblance to the young Anastasia, and her fragile mental state has caused her to suspect she might be the Grand Duchess after all, so she is perhaps better suited for this con job than most. Anna Anderson, the real-life person who inspired the filmic Anna, was a subject of much debate at the time, as there were various people with intimate knowledge of the Tsar's family who took up either verdict, that Anderson was an obvious fraud or that she was the real deal. The discovery of the real Anastasia's remains in the past decade has proven that Anderson was certainly a fake, but this story remains ambiguous enough about her true identity that knowing the recently uncovered facts fails to wreck the fun of the film.

Bounine becomes a svengali to Anna, drilling Anastasia's history, talents, and demeanor into the poor woman. He is merciless, because he knows that the people they have to convince will be merciless too. A romantic spark appears between Anna and Bounine, but it's one that Bergman and Brynner expertly keep under the surface of their characters until late in the film.

Anna begins making appearances and starts winning over some of the skeptics. (Is it because of Bounine's expert training, or because Anna is really beginning to remember her royal past?) The real test is that Anna must convince Anastasia's grandmother, the Dowager Empress Maria Feodorovna (Helen Hayes), of her authenticity before Bounine and Co. can get their money. Hayes's Empress is a formidable opponent, however, who has been presented enough fake family members over the years that she has no reason to let this strange woman just waltz right into her life. The moment when Hayes finally sits down to interview Bergman is a triumph of acting for both women. Anna opens her heart to this woman that she desperately wants to believe is her grandmother, and the Dowager Empress must seriously start to consider letting this poor creature reach her, behind the emotional armor she has held up for years.

Director Anatole Litvak (The Night of the Generals) and screenwriter Arthur Laurents (Rope) turn Marcelle Maurette's play into a big-screen fairy tale that quietly acknowledges the implausibility of its magic. Bergman pulls off the difficult task of making Anna wholly sympathetic while never letting us really see what makes her tick. Brynner -- who arguably had his best year in '56, appearing in this film, The Ten Commandments, and The King and I (!!) -- is magnetism incarnate in this role; his character is a conniving mercenary, but there's not a second of film where it's easy to dislike him. All of these unusual tensions help make Anastasia an effective and, above all, entertaining film.

The Blu-ray
Anastasia is available in a limited edition of 3000 copies. The Blu-ray is packaged with a color booklet, featuring an essay by Twilight Time's Julie Kirgo.

The Video:
This AVC-encoded 1080p 2.35:1 transfer has been meticulously remastered and looks like a faithful rendering of the film image. No dirt or damage. Colors are mostly quite vivid, although the skin tones frequently seem a little drab and brownish. Strong depth and detail.

The Audio:
The film was originally presented in 4-channel stereo, and both the DTS-HD MA 5.1 surround and DTS-HD MA 2.0 stereo remixes are tremendously satisfying, with a lot of meticulously constructed ambience in every scene and enjoyable directional effects in both mixes. Alfred Newman's score gets particularly nice play in the mix, but never overwhelms the dialogue. The disc has one subtitle option: English SDH.

- First up is a brand-new in-house commentary with TT's Julie Kirgo and David Del Valle. It is easily one of Twilight Time's best, with Kirgo and Del Valle breezily riffing on behind-the-scenes info, the historical background of the story, the CVs of the film's various players, and even a touch of showbiz gossip. The second commentary originates from Fox's 2003 DVD, and it is essentially four different mini-commentaries cobbled together into a kind of audio documentary. Historian Sylvia Stoddard dominates with background on the production and the history, screenwriter Arthur Laurents offers engaging anecdotes about his work with Anatole Litvak on this and other projects, historian John Burlingame pops in now and again to discuss Alfred Newman's score, and Hawaii Five-O's James MacArthur comes in during the second half of the film with some welcome reminiscences of his mother, Helen Hayes.


Final Thoughts:
Anastasia is a tremendously entertaining historical fantasy. Ingrid Bergman, Yul Brynner, and Helen Hayes are indelible in roles that could have easily been fumbled in lesser hands. The A/V quality on the Blu-ray is excellent, and the bonuses -- especially the new commentary -- are well worth exploring. The whole package comes Highly Recommended.