If you'd have told me that in 2016, one of the most intelligent, even-handed, touching, and downright inspirational studies on racism would come in the form of a Disney animation about a bunch of talking clothed mammals living in a metropolitan city, I'd have laughed in your face. Yet here we are: Zootopia is a gorgeous, thrilling, and sometimes downright hilarious animated adventure that works so well as an allegory about the moral and socioeconomic harm of racism and prejudice, that I honestly think showing it to kids might make a difference in how they will perceive people who don't look or act like them in the future. 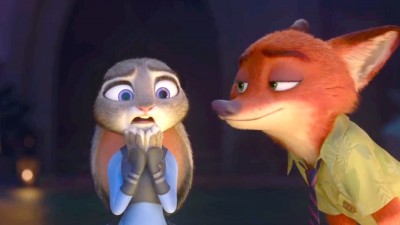 Zootopia takes place in a world made up entirely of mammals that "evolved" out of their primitive state. Just like humans, they walk on two legs, wear clothes, go to work, and spend way too much time on silly smart phone apps. And just like humans, they live in a society that suffers from prejudice and discrimination. Zootopia is the central city of this animal world, a giant metropolitan culture hub where every species coexist.

Yet there's an ongoing rift between predators and the prey, who used to be mortal enemies before things changed. Sure, the predators don't eat the prey anymore, but even though they're ten percent of the population, they clearly discriminate against the prey, especially when it comes to careers that would involve fierceness, speed, and agility. Being a police officer is one of those careers, but that doesn't stop the tenacious bunny Judy (Ginnifer Goodwin) from following her dreams of becoming a cop, even though there hasn't been a single bunny in history that got the job.

But against all odds, which include her parents outright telling her to give up on her dreams, Judy breaks the fluffy ceiling in order to become the first rabbit police officer in Zootopia. Of course, as an award for her hard work, she's given parking meter duty; since her predator chief, Bogo (Idris Elba), doesn't think that prey belong on the police force to begin with. It seems like a pretty clear-cut case of discrimination, the predators bully the prey using their superior strength and size. But Zootopia doesn't let its audience get off the hook that easily.

As Judy stumbles on a mystery that involves predators suddenly reverting back to their primitive selves and attack other mammals, she begins to realize that prejudice is a two way street. While trying to solve the mystery with a con artist fox (I refuse to use the word "sly") named Nick (Jason Bateman), Judy finds out that the prey can be just as prejudiced, if not more.

I realize that I'm making Zootopia sound like a boring after school special with heavy-handed lessons about the evils of racism. Yes, the film is fascinating in the deft manner it deals with these issues, especially for animated family fare, but it's also a beautiful and immensely entertaining experience that's genuinely funny while sporting an intriguing and nail-biting mystery plot in its center.

And let's not forget the visuals. One of the joys of watching the film is to lay eyes on the mesmerizing and intricate design work that brought such a complex idea to life. The sizes of the animals are not magically reshaped for the sake of lazy animation. Every animal, from the smallest to the largest, co-exists in Zootopia, with a genius city design that accommodates all. One of the best gags in the film involves three different sized mammals exit a train through three different sized doors.

The city itself is also split into various climate "boroughs", from rainforest to arctic, you name it. Each borough creates an intricately designed visual world and provides the film with an abundance of variety as Judy and Nick go through the city while trying to solve the mystery. I'm willing to bet that repeat viewings will result in audiences picking up on many fascinating background details that gives this fictional city the lived-in feel it so impressively captures.

The clean and crisp 1080p transfer of Zootopia is pitch perfect, without any noticeable video noise. The various boroughs in the film have their own distinct color palettes, and the video presentation captures all the wildly different tones. If you're looking for a demo disc that will showcase the wide range of colors of your home theatre system, look no further.

Yes, Zootopia is an animated film for families. But bear in mind that it's also an exciting buddy cop movie, as well as a thrilling procedural. Therefore, it's not surprising that the DTS-HD 7.1 transfer turns out to be a dynamic experience that takes full advantage of every channel during the film's many exciting chase and action scenes. The superb mix between the dialogue, the heartwarming score, and the expertly designed sound effects creates an engaging and balanced listening experience.

Research: This is a sweet 10-minute featurette that shows the filmmakers going to Africa to research the animals that will end up in the movie.

The Origin of an Animal Tale: Another 10-minute featurette, this one about the many versions the story went through until the final draft.

Zoology: Around 18 minutes of conversations where the filmmakers discuss various aspects of the entire process. This stuff is so fascinating that I wish this feature was longer.

Scoretopia: A quick featurette about the film's score. Not long or informative enough to be substantial.

Forensic Files: A video montage of Disney easter eggs in the film. This is fairly useless, since the easter eggs are very easy to spot during the film itself.

Music Video: Shakira, who plays huge pop star Gazelle in the film (The name sounds like they tried to get Adele for the role and failed), sings the catchy and appropriately annoying track, Try Everything.

Deleted Characters: A very quick breakdown of characters that were taken out of the final cut.

Deleted Scenes: About 20 minutes of deleted material in various stages of animation. Some fun stuff can be found here, but nothing really interesting.

Since Pixar's back on the franchise train with yet another sequel this year, it's up to Zootopia to swoop in and become the insightful, brave, heartwarming, and immaculately executed original animated hit of the year. Very highly recommended to all ages.