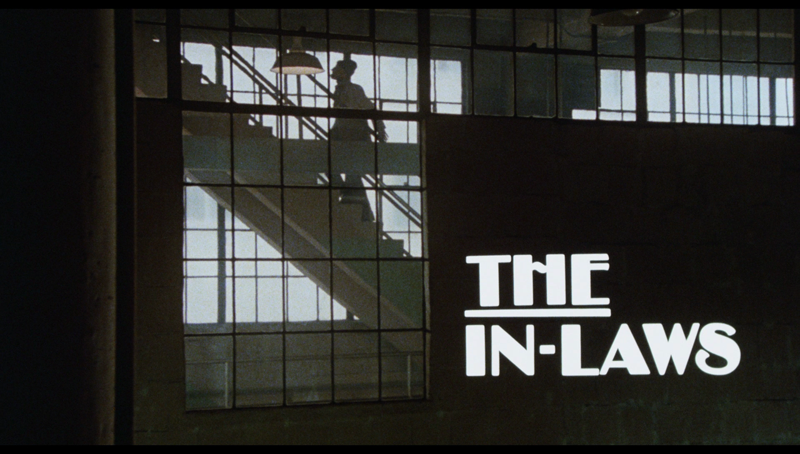 
The Movie
After watching The In-Laws and seeing what tremendous chemistry Alan Arkin and Peter Falk shared, it's only natural to want to watch the other films this natural duo made. Unfortunately, this would somehow be their only shared output, leaving viewers wondering what could have been (which, as reader Channing King points out, would be 1986's forgettable Big Trouble, but lets all continue to pretend that didn't happen.) The fact that their one and only on-screen collaboration resulted in a film that looks so effortlessly funny only increases the disappointment in knowing that there are no other examples of their combined brilliance. That said, The In-Laws is so fun and breezy that it holds up well to multiple viewings, driven by two wonderful leads, an exemplary supporting cast and an outstanding writing and directing team.

Barbara and Tommy are going to get married in a few days, and a few days before the wedding, Barbara's parents, Sheldon (Arkin) and Carol (Nancy Dussault, Too Close for Comfort), are going to finally meet Tommy's often-absent father Vince (Falk), who is usually away on business trips. Sheldon has an immediate mistrust of Vince and the family his little girl is going to marry into, a feeling that doesn't improve when Vince shows up at his dental practice unannounced and convinces him to help him retrieve items from the safe at Vince's office. This puts the two men on the run from criminals and the government, and turns Sheldon's staid life upside down. It's only complicated by Vince claiming he's working for the CIA, a story that may or may not be true, as Sheldon gets mixed messages from everyone around him.

It's no surprise that Hollywood tried to recapture the magic of Arkin and Falk's pairing with an ill-received 2003 remake starring Albert Brooks and Michael Douglas. Falk and Arkin made it look so easy to be so funny, but the problem mainly lies in the fact that, as good as Douglas is, he's nothing like Falk, whose undeniable likeability as something of a nutty schlub makes the pairing with the straitlaced Arkin work. It's hard to think of an actor that could work in the part aside from Falk (perhaps Tony Shalhoub, though if Mark Ruffalo wants to give it a shot in a few years, I'm willing to watch.) Falk is great at being charming enough to believe that Arkin's character would go along despite the obvious warning signs, while Arkin manages to allow enough of a snark into his performance that he doesn't seem like a naive buffoon, but rather a father who wants to try and make his daughter happy. 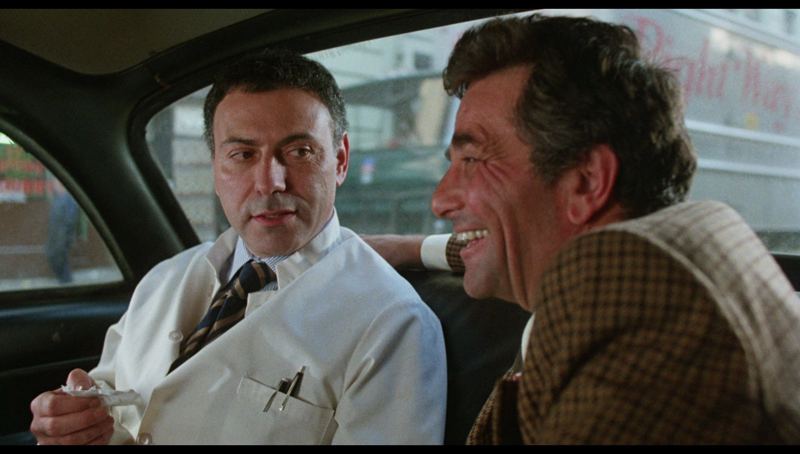 Working from a script by the great Andrew Bergman (Blazing Saddles, Fletch), director Arthur Hiller shows the same deft hand at working with great comedic pairings that he did in his work with Gene Wilder and Richard Pryor, and a skill with action scenes, like the several chase scenes in The In-Laws. The structure of the film alternates between hilarious conversations between Falk and Arkin and action scenes, breaking for a few spotlight moments like a meeting Central American military leader General Garcia (Richard Libertini), a wonderfully silly and hilarious scene that most closely aligns the film with Bergman's Blazing Saddles.

As enjoyable as the film is, the storïy is a bit of a mess, full of missed opportunities, plot holes and major contrivances. For example, while New York City certainly was a tire fire at the time of the film, it's hard to imagine a gun battle in the middle of Manhattan drawing such little attention. The thing is, in the moment, you don't question much about the movie, especially since Sheldon often takes care of that for you, observing the increasing madness around him with bemusement. As important as Falk is to the feel of the movie, if Arkin wasn't such a master of coiled rage, the core conflict wouldn't be as entertaining as it is.

As with a lot of comedy from less aware times, there are some jokes that get harder and more uncomfortable to laugh at or with, and that's the case with James Hong's character, Bing Wong. Hong is a great actor, but when the laughs Bing gets are because you can't understand his Chinese, it's not Hollywood's finest hour (though the Mae West bit remains funny.) While it's certainly not the most overtly racist bit of comedy involving an Asian character from the time period, it just doesn't work as well as it would have in the past because of the basis for the gag. (That Hiller refers to Hong and his fellow Chinese actor as "Orientals" on the included commentary [see The Extras] doesn't help.) 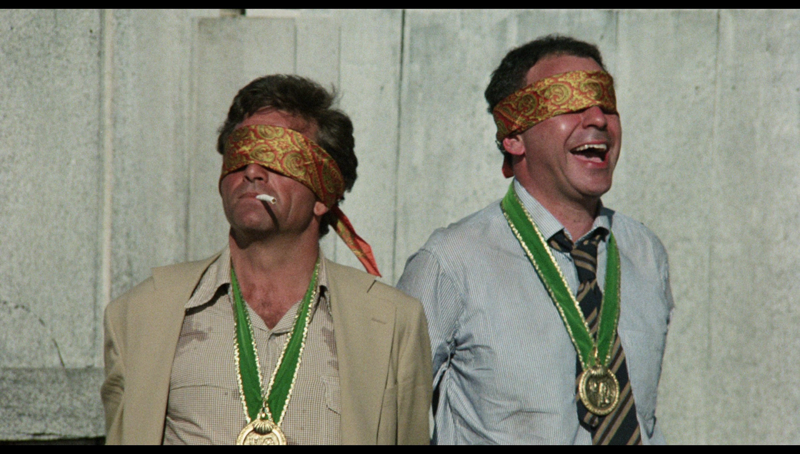 The Disc
The In-Laws (spine number 823) arrives on one Blu-ray disc in a clear keepcase with a double-sided cover featuring tremendous cover art. The classic Criterion menu, over a still of Falk and Arkin, gives the choice to watch the film, navigate the timeline, select scenes and check out the special features. There are no audio options but English SDH subtitles are available.

The Quality
The 1080p, AVC-encoded 1.85:1 transfer comes from a 2K scan of a 35mm interpositive, which was cleaned up digitally. The image looks like a film shot in the ‘70s, with a naturalistic, earth-toned palette and a cinematic layer of grain, but the level of fine detail is very high (showing off tons of texture in the production design) and color is good across the board, though skintones can get a bit red in spots. The image is solid throughout, and the presentation is free of any notable digital distractions.

The audio is presented in a LPCM 1.0 track that gives sufficient power to all the elements as well as appropriate separation, particularly late in the game when things get more active (though gunshots never get very heavy.) Dialogue is always clear, the score is strong and there are no issues with distortion. It's a rather straightforward mix that's biggest strength is its consistency.

The Extras
The big extra here is carried over from the 2013 Warner Brothers DVD, and that's an audio commentary with Hiller, Bergman, Falk and Arkin. In a conversation that's uses what's happening on-screen as a jumping-off point, they talk about how this film came together (including the important role of Freebie and the Bean) and what it was like to make the movie. Falk is just a riot, even if his memory isn't as sharp as a tack, as they chat and tell stories, revealing some details about the film along the way. It's a good time listening to good friends and collaborators revisit one of their best works, not to mention something of a class in classic comedic construction.

"Alan Arkin on The In-Laws: Sheldon Kornpett's Gleeful Descent into Madness" (24:07) is a new interview with the actor, in which he talks about his career, including his filmography and influences; his initial discomfort with comedy and what it's like for him to act, with an excellent amount of reminiscing, background and insight on The In-Laws. There's a lot of great info here courtesy of a very thoughtful man, as well as a glimpse at his imitation of Falk.

The 34:07 "In Support of The In-Laws" features new interviews with Ed Begley, Jr., Dussault, Hong and David Paymer, as good a quartet of supporting actors as you could ask for. Through their memories from and observations on the film and the people involved, as well as the art of being a character actor, this piece presents a very interesting perspective on the movie, and an entertaining one as well thanks to some fun stories.

The trailer for the film (2:47) is the kind of clumsy narrator-led preview that reveals way too much about the movie.

The traditional Criterion booklet included checks in at 24 pages, with info about the movie and disc, great stills, an excellent essay on the film by comedy writer Stephen Winer, and a chapter from Hiller's unpublished memoir, in which he goes into detail on the production of The In-Laws, revealing some behind the scenes secrets. 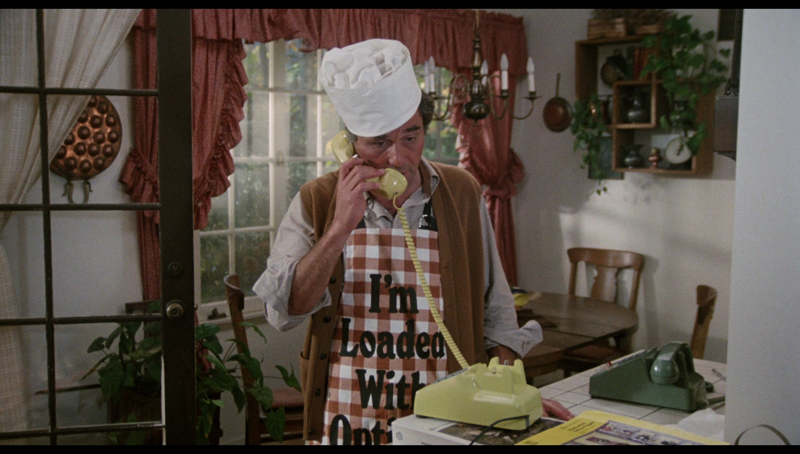 The Bottom Line
The In-Laws is a fun comedy that's best when you don't think too much about it, as the plot often doesn't make a great deal of sense and the comedy involving Hong is just this side of racist. But when you have an incredible pairing like Falk and Arkin and the ridiculous scenario they are wrapped up in, it's incredibly easy to overlook the problems. Criterion's presentation is excellent, from the audio and video quality to the small but complementary selection of bonus features. Fans of classic comedy will want to have this one in their collection, whether it's to revisit it or discover it for the first time.