Man Who Could Cheat Death, The

Kino // Unrated // March 14, 2017
List Price: $29.95 [Buy now and save at Amazon]
Review by Stuart Galbraith IV | posted March 21, 2017 | E-mail the Author
A gothic horror film made by Hammer Films near the peak of their artistic prowess, The Man Who Could Cheat Death (1959) is generally very good if stagey, compromised somewhat by the casting of German actor Anton Diffring in the lead, a last-minute replacement for Hammer's regular leading man of the period, Peter Cushing, who bowed out. Diffring, usually typecast as cold-hearted Nazi officers in British and international productions, is alternately aloof and hysterical, and never sympathetic. Diffring plays the part as written in Jimmy Sangster's screenplay, but Cushing, who liked to rewrite dialogue or have others rewrite dialogue for him, doubtlessly would have brought some humanity to a part Diffring's characterization lacks.

But it's still a well-made, handsome production from Hammer's best period. In the wake of The Curse of Frankenstein (1957) and Dracula (1958), modestly-budgeted films that were huge international hits, Hollywood studios were clamoring to have Hammer make similar horror films for their respective distribution arms. Columbia bagged The Revenge of Frankenstein (1958), United Artists The Hound of the Baskervilles (1959), Universal The Mummy and so on. The Man Who Could Cheat Death was made-to-order for Paramount, a company not known for its horror output. As with several of their other deals, Hammer had the pick of the litter, so to speak, the option to remake any property Paramount owned. Some have wondered why Hammer didn't choose a more obvious property, like remaking Paramount's Dr. Jekyll and Mr. Hyde (1932) or Island of Lost Souls, but rights to those might have been in other hands by that point.

Regardless, they chose to remake The Man in Half Moon Street (1945), an almost completely forgotten Dorian Gray-type fantasy, released less than three month's prior to MGM's much more famous and proper adaptation of Oscar Wilde's Picture of Dorian Gray. Nevertheless, London-born Barré Lyndon, from whose play The Man Would Could Cheat Death was based, was a respected writer and had some pull at Paramount, where he penned screenplays to such films as The War of the Worlds (1953) and Omar Khayyam (1957).

The Man Who Could Cheat Death was first released to Blu-ray in 2011, by Legend Films on a double-bill with The Skull (1965). Kino's new release offers a similar (if not identical) transfer but extras ported over from a U.K. release by Eureka Classics in 2015. 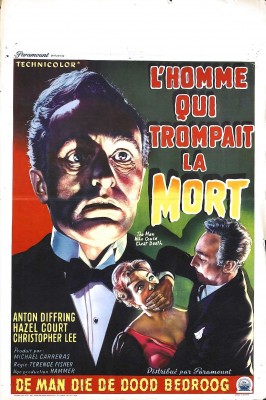 Meanwhile, Bonnet anxiously awaits the arrival of 89-year-old Viennese colleague Professor Ludwig Weiss (Arnold Marlé). The first two-thirds of the film are structured like a mystery, with Bonnet acting increasingly desperate and suspicious. Weiss eventually turns up, and in the nick of time, too, as Bonnet needs to be operated on at once. Something is clearly amiss: in another scene, another of Bonnet's amorous sitting models, Margo (Delphi Lawrence), catches Bonnet at the worst possible moment of his "illness." He turns a pale green, the pupils of his eyes bug out (via contact lenses), and his touch leaves a severe, palm-shaped burn over Margo's mouth.

(Mild Spoilers) It turns out that Bonnet is cursed with immortality, that he's 104 years old and Weiss's senior colleague. To maintain his youthful appearance and avoid an instantly aged, painful death he needs a transplant of a fresh parathyroid gland (the organ stolen from a hapless extra during the opening titles). The green-faced, bug-eyed state is one of the side effects as the older gland fails. Weiss, however, has suffered a minor stroke en route and can no longer perform surgery and would be disinclined even if he could. This forces Bonnet to kidnap Janine and blackmail Pierre.

Populated if not dominated by veteran Hammer actors like Lee, Court, and big, bearded Francis de Wolff (as a police inspector), with behind-the-camera talent like Sangster, producers Michael Carreras and Anthony Nelson Keys, director Terence Fisher, art director Bernard Robinson, etc., The Man Who Could Cheat Death looks like other Hammer Horror of the period, if not for Diffring and Marlé in two of the three most prominent roles. The film has an air of trying to be slightly more sophisticated and less lurid than Hammer's earlier successes - it's less gruesome for one thing - yet its basic story isn't altogether different from the cheapest Hollywood potboilers emanating from Poverty Row in the ‘40s, with The Man Who Could Cheat Death resembling the gloriously silly Bela Lugosi The Ape Man (1943) particularly.

Christopher Lee, still not quite regarded as a leading man of horror films, is atypically cast as the romantic lead, but it's a refreshing break from the ramrod-postured, haughty types he usually essayed when not playing monsters. He's further aided in that his scenes with de Wolff's inspector are sharply written. Marlé, in real life married to Sigmund Feud's niece (!) and bizarrely cast as the Grand Lhama in Hammer's The Abominable Snowman the year before, is fine as the elderly Weiss, having played the role in a British television version of Half Moon Street with Diffring, no doubt also accounting for the latter's casting as Cushing's replacement.

After this Diffring starred in the much more luridly entertaining Circus of Horrors (1960), one of the great sadistic horror films of all-time, in which Diffring gives a more flamboyant, juicy performance. Born in Germany with the double whammy of being both half-Jewish and homosexual, Diffring with his steely blue eyes, sculpted features and blond hair made him ideally suited to play icy German officers, variations of which he played in The Colditz Story (1955), The Blue Max (1966), Where Eagles Dare (1968), the unreleased The Day the Clown Cried (1970), and many others. He also played a fascist book burner in Fahrenheit 451 (1967). Probably his best role, and the one closest to Diffring's off-camera personality according to those who knew him, was as Fritz in I Am a Camera (1955), the non-musical film later adapted as Cabaret.

Presented in its original 1.66:1 (not 1.75:1) widescreen, Kino's Blu-ray to my eyes looked about the same as Legend's earlier Blu-ray. Originally printed in Technicolor, the transfer looks fairly good, lacking perhaps the original luster of Technicolor's IB prints. The DTS-HD Master 2.0 mono audio is reasonably strong. Region "A" encoded.

Supplements include a commentary by genre historian Troy Howarth, and on-camera interviews with the two go-to guys for virtually all Gothic horror on British discs, Kim Newman and Jonathan Rigby. They offered a lot of informed insight on the genre and The Man Who Could Cheat Death particularly.

Though something of a bastard child among Hammer buffs with its slight miscasting of Anton Diffring in the lead and Jimmy Sangster's unsympathetic, selfish character to go with it, The Man Who Could Cheat Death is still way above average for its type, and Highly Recommended.