Our current western approach to mainstream stories about children dealing with their emotions and the struggles of the outside world is usually reserved for light, G-to-PG depictions of fluffy and colorful adventures. They're meant to provide the occasional distraction and escapism, no matter how successful and effective that escapism might be, that's almost afraid to deal with any emotion that the audience might find to be too painful or full of too much real life grief. It's as if we think that only adults have a monopoly on such complex issues, while forgetting that children in the real world also have to face pain and grief, sometimes even the kind that seems insurmountable, and might be looking for stories that could let them deal with these emotions and realize that they're not the only ones going through hard times. 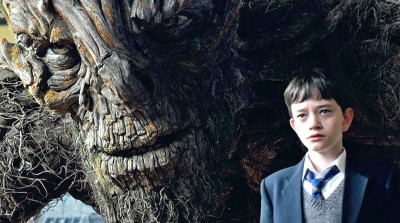 We think we're shielding them from the troubles of the outside world while presenting benign fantasies, while we're actually doing them a disservice by looking as if we refuse to acknowledge what they might be going through. Children are a lot stronger and more resilient than we give them credit for, and they deserve stories that creatively and delicately, yet bluntly and directly, find a way to help them deal with hardships they might be going through. In that sense, A Monster Calls is a bit of a miracle, a profoundly moving experience that's equally emotionally devastating and fulfilling, that's never afraid to go into the dark territories of a child's mind, while wrapping the complex feelings it deals with into an endlessly imaginative and empathetic package.

Based on Patrick Ness' novel, adapted for the screen by Ness himself, and directed by J.A. Bayona, a versatile Spanish auteur who has a uniquely introspective handle on genre cinema, the film tells the story of Conor (Lewis MacDougal), a forlorn and socially awkward boy whose life has been turned upside down due to his mother's (Felicity Jones) imminent death from cancer. Struggling to find an avenue to process his grief, Conor imagines a giant tree next to his house to be a huge, ancient monster (Liam Neeson) that promises to tell him three stories, one each night, until Conor reveals a mysterious truth that's hiding inside him. As Conor's relationship with the monster synergizes into an outward explosion of his anger and sadness, the monster gradually digs away at the ugly truth that Conor might not be ready to face.

A Monster Calls' dark and allegorical approach to a premise that sounds more or less like an honest fairy tale that deals with real life hardships (In other words, fairy tales as we used to know them) will undoubtedly draw comparisons to Guillermo Del Toro's masterwork Pan's Labyrinth. The technical and thematic similarities aren't exactly shocking, since Del Toro produced Bayona's first feature, the effective horror flick The Orphanage. A Monster Calls is less of a visceral and more of an internal experience compared to Pan's Labyrinth. It's a somber tale that openly bears its soul in a manner that always rings true, which should bring out the waterworks from many audience members. Yet there isn't a single moment in it that feels like Bayona tries to artificially construct an easy tearjerker.

The performances are terrific all around. MacDougal is a marvel of a child actor who delivers every single intricate emotion he's asked to capture. Neeson's monster is the real star of the film, a design marvel that perfectly melds the creature's ancient and earthly gravitas with Neeson's trademark gruff authority. 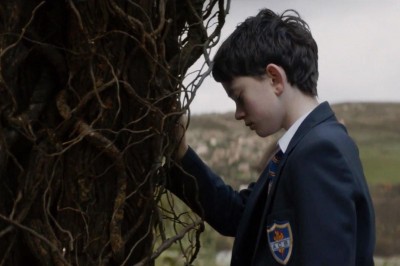 A Monster Calls matches its protagonists' dark and depressed state of mind with a beautifully subdued, almost grayscale color scheme, with occasional pops of color during the inventive animated sequences. The 1080p transfer succinctly captures the film's look with a healthy amount of contrast and stunning black levels.

The film's DTS-HD 5.1 track truly comes to life whenever the monster is on screen. Each crack and pop of the giant tree's movements is felt across all speakers. The first time the monster crawls out of the soil and shows up at Conor's doorstep is almost demo worthy. Other than that, the mix provides perfectly satisfactory and clear dialogue.

The Making Of: Split into various parts, this 20-minute featurette briefly covers most aspects of the production, from the story's inception, to the creation of the monster.

Making of the Tales: An 8-minute demoreel by the animation company that did the tales told throughout the film. It shows the animation during various stages.

Audio Commentary by Patrick Ness: Ness offers a genial commentary as he talks about the inspirations for his novel and the film adaptation.

Audio Commentary by J.A. Bayona: The director does a great job weaving between the technical aspects of the production and the story's hidden themes. In Spanish with English subtitles.

A Monster Calls was one of my favorite films of 2016. It's an immensely effective experience that's suitable far almost all audiences. Even though it deserves its' PG-13 rating not because of violence but because of its' frank depiction of grief, it would be a perfect choice for children who might be going through an experience similar to Conor's.