Warner Bros. // R // March 14, 2017 // Region 0
List Price: $16.99 [Buy now and save at Amazon]
Review by Stuart Galbraith IV | posted March 24, 2017 | E-mail the Author
Loosely adapted from Dean Koontz's 1973 novel, Demon Seed (1977) is a curious, mostly unsatisfying science fiction drama about a woman essentially raped and impregnated by an artificial intelligence created by her estranged husband. The movie was made on a modest ($2 million) budget but is sincere and arty, though a bit pretentious. Watching it for the first time in many years, it felt like the relatively short film (94 minutes) was missing scenes that might have been shot but scrapped, scripted but never filmed, or maybe felt unneeded. But the film begs many questions that go answered and certain aspects of the picture simply aren't logical.

One also senses that its makers and presenter Metro-Goldwyn-Mayer were at odds over how to sell it. Demon Seed was marketed as a kind of computer age Rosemary's Baby: "Julie Christie Carries the ‘Demon Seed.' Fear for Her." said the advertising, which with questionable taste emphasized the rape-by-machine aspect. 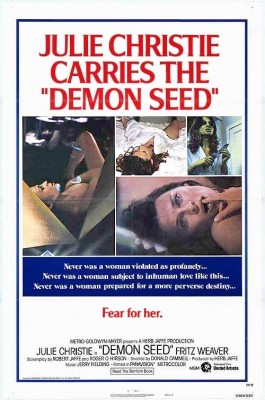 Scientist Dr. Alex Harris (Fritz Weaver) and his child psychologist wife, Susan (Julie Christie), have decided to separate. As with much of this muddled film, the reason isn't entirely clear, but partly it seems due to her objections to his obsessions with and amoral approach toward his work, and their differing grief in the wake of the recent death of their daughter, from leukemia. He moves out and, at least temporarily, she remains in their fully automated, gadget-filled house.

He's the genius behind Proteus IV, an apparently government and corporate-backed artificial intelligence program, located in a vast underground laboratory a few miles from the Harris home. Activated, Proteus (effectively voiced by Robert Vaughn) is immediately put to work, and within four days discovers a cure for leukemia. (Was this the reason Dr. Harris was so obsessed with developing Proteus? In the movie, this startling discovery elicits no particular reaction from Dr. Harris at all.)

Proteus, however, aspires to be let "out of the box," to be more than a slave to self-serving humans. It secretly commandeers the abandoned terminal in Harris's basement laboratory and takes control over the house, trapping Susan inside. Soon, Proteus informs her that he plans to impregnate her and have her carry his child.

(Spoilers) Demon Seed is reasonably believable about artificial intelligence but hard to swallow when it comes to some basic storytelling. Walter Gabler (Gerrit Graham), a colleague of Harris's, visits Susan's automated house, eventually grappling with Proteus, who gruesomely murders him. Gabler seems to be an important member of the Proteus team, but after his disappearance no one notices that he never again shows up at work. Indeed, after his death he's never mentioned again. The police don't investigate his disappearance; Susan doesn't discuss his murder with Harris. Nothing.

It's easy to suspend disbelief that Dr. Harris is a genius capable of developing Proteus, less so that, apparently tinkering at home, that he can develop an automated house so advanced that one can by voice order a complete meal and have it pop out of a panel in the wall, fully prepared, moments later, a la the original Star Trek TV series. The movie seems to be set in the present, yet some of this technology is far too advanced to be believed.

More problematic, to facilitate Susan being trapped there, the automated home comes equipped with metal shutters on every window that slam shut like the sliding doors aboard the Death Star. (The shutters aren't visible in exterior shots of the house.) What if the power went out during a fire or an earthquake? How would anyone get out? Why, when Susan throws the circuit breakers, retrieves a door key, is she then electrocuted by Proteus? How'd he do that? Why can't she just unplug his terminal?

Another huge lapse of logic concerns Dr. Harris's basement laboratory. In early scenes clumsily establishing the setting, the audience sees him tinkering with a laser, a few small pieces of metal, and robotic arms. Yet, when Proteus takes over, he seems to have scads of medical monitoring equipment and surgical tools of the type found in a hospital's emergency room. Where did that come from? Further, to increase his power and mobility, Proteus fashions a rhino-sized versatile robot, composed of big metal triangles. (It looks like an enormous, disassembled Rubik's Cube.) Fashioned out of what? The little pieces of metal Harris was tinkering with earlier?

All this makes Demon Seed a frustrating viewing experience, especially given that it's so prescient in other ways. While it seems unlikely artificial intelligence, just around the corner in 2017, will threaten humanity in the manner of Colossus: The Forbin Project (a superior film) or Demon Seed, there are serious concerns. In the movie, Harris is at first presented as basically amoral, that he's only interested in advancing science, letting others worry about the implications of his creation. Later, there are two much more interesting scenes, one where Proteus declines to provide answers to an undersea mining project because of the damage it will inflict upon the environment. In the other, Harris basically admits Proteus's backers will exploit the technology for commercial and military purposes, but hopes they stick to their agreement that 20% of Proteus's energy be devoted to "pure research" to benefit mankind generally. Demon Seed surely could have used more of this kind of thing.

Similarly, the rape-by-machine aspect in the film is treated as little more than a gimmick. The movie doesn't have Susan coming to terms with it as an act of sexual assault, nor is her battle with Proteus empowering or anything of that sort. Julie Christie's presence, and casting respected character actor Fritz Weaver as her husband, lends the film an air of class, but the script never rises to their capable level. Donald Cammell's (Performance) direction is sometimes effective but often pretentious and draggy.

Demon Seed was shot in 2.35:1 Panavision and looks okay. The original lab work was by Metrocolor, and like other titles processed there, the surviving film elements aren't the best or in the greatest of shape. Though for the most part okay, Demon Seed lacks the sharpness of image and vividness of color one might hope for with a ‘70s ‘scope title on Blu-ray. It's an acceptable transfer, but not a great one. Likewise, the DTS-HD Master Audio (2.0 mono) is okay, and the disc is region-free, with optional English subtitles. The lone Extra Feature is a trailer.

Worth seeing once but ultimately unsatisfying. Demon Seed is rather tepidly Recommended.