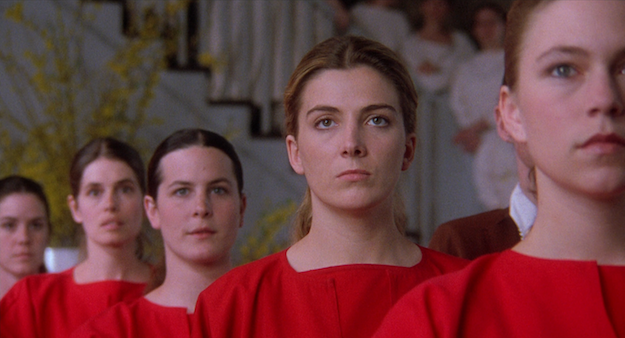 In anticipation of the new Hulu series The Handmaid's Tale, based on Margaret Atwood's classic dystopian novel, Shout! Factory has just released a new Blu-ray/DVD set of the book's 1990 film adaptation, starring the late Natasha Richardson.

Many articles and thinkpieces have already been published about the way that parallels to the current political situation have triggered increased interest in dystopian literature, so I don't pretend to be saying anything new when I marvel that this 27-year-old film feels awful timely. In the film, politicians have used the idea of returning to traditional values -- specifically Old Testament Biblical values -- as a means to build up a totalitarian government that affirms religious patriarchy and strictly regulates women's reproduction. In real life, American politicians have not gotten quite so far -- but they are certainly well on their way down this same road.

In The Handmaid's Tale's vision of the near future, America has morphed into the Republic of Gilead. Pollution has caused the majority of women to become barren. The lucky (or unlucky) fertile few are conscripted to become Handmaids, indoctrinated in the ways of sexual servitude and then assigned to a wealthy childless couple, to bear them children.

Our heroine, Kate (Natasha Richardson), is captured while trying to escape the country. Her husband is shot dead, and her daughter is taken away from her. She is assigned to a high-powered couple played by Robert Duvall and Faye Dunaway and renamed "Offred." Even though Duvall's character bears the title of "The Commander,"* it is clear that Dunaway's brittle housewife, Serena Joy, holds Kate's destiny in her hands. If Offred displeases, she will be exiled to the Gilead version of Siberia.

Even in such a repressive society, those in power can get around the rules. The Commander frequently invites Offred to spend time with him, enjoying contraband in his study. Once, he takes her to a special party where powerful men drink excessively and indulge in recreational sex with outcast women. At the party, Offred meets up with Moira (Elizabeth McGovern), a woman she befriended when they were initially captured. Both women are happy to see the other, but are also quietly sad to see the depths to which they have both sunken.

When Offred fails to get pregnant after a few months of distasteful, awkward sexual intercourse with the Commander, Serena Joy suggests that she try out a potentially more potent partner: the Commander's macho chauffeur Nick (Aidan Quinn). Nick is charming and his affection for Offred hints at a potential way out.

Director Volker Schlöndorff (The Tin Drum) has experience making literary adaptations that are politically charged and lightly surreal. His vision of this dystopia, based on a script credited to Harold Pinter (but reportedly the result of many writers, including Margaret Atwood), is sharp but understated.

Rather than looking overtly nightmarish, Gilead appears as a mildly heightened version of America in 1990, or even today. The powerful, barren women all dress like Barbara Bush clones: tasteful blue dresses and pearls. When a few dozen of them gather to celebrate the birth of one of the Handmaid's babies, it looks like a GOP fundraiser brunch. The Handmaids meanwhile look a bit like servant girls in a 1950s Bible epic: red robes, sometimes augmented by a veil. And completing the color-coding motif, the women who run the indoctrination camp, like Victoria Tennant's far-from-familial "Aunt Lydia," look like high school administrators in baggy brown sweaters and skirts. The contrast of Aunt Lydia's banal appearance with the sadism of what she does -- like sentencing dissidents to be hanged in public or to be literally torn to shreds -- is completely horrifying in its plausibility.

Upon release, this film was greeted by mixed reviews and anemic box office. Based on the handful of contemporaneous reviews I've looked at, the problem might have been that the story's thematic concerns seemed a bit too trumped up at the time (ha ha, yes I know). However, what once seemed radical and far-fetched now has the opposite problem and sometimes feels a bit too on-the-nose.

Its topical relevance aside, The Handmaid's Tale is a gripping film. The performances are uniformly strong, with particularly memorable turns from Duvall (as magnetically jolly as he is monstrous) and McGovern (a perfect blend of mischievousness and world-weariness). The "hotchpotch" of a script (to quote Pinter) loses the thematic thread in the final stretch, but the whole enterprise is entertaining enough that the filmmakers kind of get away with it.

*The actual first name of the character is Fred, which explains the name Kate is given when she comes into the house: "Of Fred." 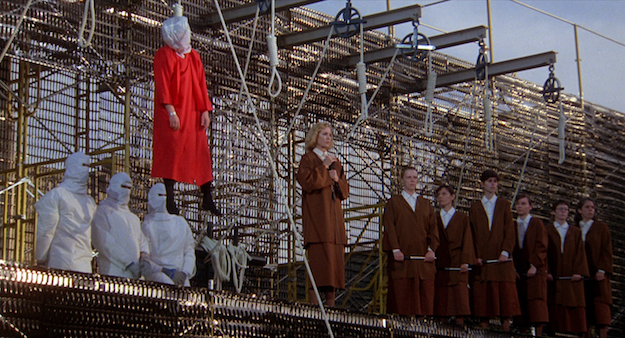 The Blu-ray
The Handmaid's Tale is presented as a Blu-ray/DVD combo pack, with the feature film and trailer available on both discs.

The Video:
While not an overt dazzler, this AVC-encoded 1080p 1.85:1 transfer gives the impression of being accurate to the original photography by frequent Volker Schlöndorff collaborator Igor Luther. Strong colors and contrast, with good detail reproduction and well-resolved film grain. There is some scattered, era-appropriate softness, but that's not a real drawback.

The Audio:
Similarly, the DTS-HD MA 2.0 stereo audio is solid, if unremarkable. No trouble making out dialogue. The score by Ryuichi Sakamoto is alternately foreboding and a bit anonymous, but it comes through in the mix well. One subtitle option: English SDH.

Special Features:
Just the trailer, but it's a pretty good one.

Final Thoughts:
Far from feeling dated, this underrated piece of speculative fiction is now more uncannily in-sync with the times than when it was originally released. Even when forced to compete for attention with the high-profile Hulu series that debuts shortly, I suspect this movie iteration of Margaret Atwood's story will entertain and provoke new viewers for years to come. Highly Recommended. 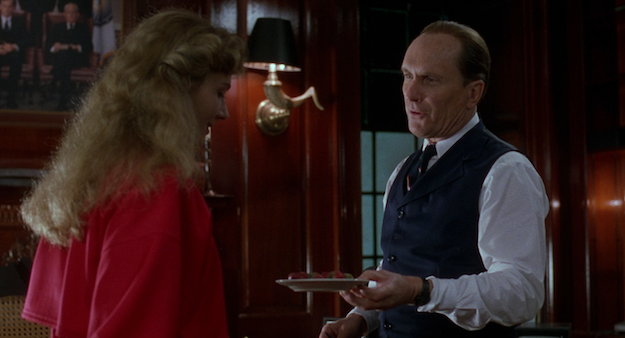