Cheech And Chong's Next Movie

Shout Factory // R // June 13, 2017
List Price: $27.99 [Buy now and save at Amazon]
Review by Stuart Galbraith IV | posted June 29, 2017 | E-mail the Author
I saw Cheech and Chong's Next Movie (1980) when it was new but not once since until the Blu-ray. It wasn't as funny as I'd remembered it, despite scattered big laughs here and there. I was, however, fascinated by it as a relic of a type of politically incorrect comedy a big Hollywood studio like Universal (that produced it) wouldn't today touch with a ten-foot pole.

The movie, of course, is an extension of the comedy duo act of Richard "Cheech" Marin and Tommy Chong, whose records featuring their none-too-bright pot-smoking hippy characters became cultishly popular among a surprisingly wide spectrum of races and income levels. Up in Smoke (1978), their first movie, cost just $2 million but made $44.4 million. Next Movie was nearly as successful, earning $41. 7 million, remarkable feats for R-rated movies that to a large extent extol the virtues of casual drug use (primarily marijuana but also cocaine). Further, their records and early films equally revolved around self-deprecating humor about lower-class Hispanic-American life, and in this case is set mostly around pre-gentrified, seedy and rundown Hollywood. For commercial television airings the movie had to be cut and homogenized almost beyond recognition. (The Blu-ray appears entirely true to the original theatrical version.) Even today Universal seems embarrassed by the success of these films, which more than money is likely the reason they chose to sublicense Next Movie to Shout! Factory. Would a big studio green-light a movie like this today? Not a chance. 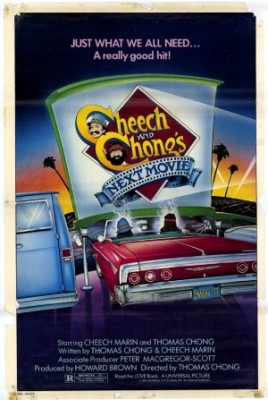 Another unusual aspect of the film, quite admirable actually, is that it's essentially plotless. Instead, as Martin describes it in one of the special features, it's basically "A Day in the Life of Cheech & Chong." The movie opens hysterically, with the pair siphoning gas from a tow truck into a dirty, open garbage can, and then carrying the highly flammable stuff several blocks, the gasoline splashing everywhere.

Other vignettes follow. Cheech visits a movie studio where his girlfriend (Evelyn Guerrero) works, disrupting things. (Playing extras in the scene been shot are Cassandra "Elvira" Peterson and Rita Wilson.) One curious aspect of the picture is that it breaks up the familiar team early on when Chong meets and spends the rest of the picture with Red Mendoza (also Marin), Cheech's "kinda" cousin, who comes to town with a duffle bag stuffed with about 20 lbs. of grade-A marijuana.

An endless number of movies and television shows have tried to capture hippie lifestyles but nearly all fail miserably and most (such as regular visitors to Dragnet) are laughably inauthentic. Ironically, though a broad comedy Cheech and Chong are uncannily accurate if exaggerated versions of many of the stoners I knew, and in a weird way the movie captures the essence of hippies in their natural habitat - their disheveled, condemned house, with its filthy kitchen and aquarium, guitars and roach clips lying around everywhere, etc. - spot on.

Cheech and Chong seem to be extremely generous performers, as Next Movie is as much a showcase for young talent playing characters they bump into over the course of the story. There's a wonderful moment where, at the welfare office collecting their unemployment checks the boredom of sitting around there is broken by another recipient (Michael Winslow, pre-Police Academy) making funny sound effects using only his mouth. Chong and the others nearby watch quietly amazed and entertained. It's a low-key comedy moment, but effective and amusing, more for Chong's reaction than Winslow's noises.

Also featured are members of the Groundlings, notably Edie McClurg, Phil Hartman, and Paul Reubens. In Reubens's second scene he appears for the first time in a movie as Pee-wee Herman, that character still not quite fully formed.

Many Universal titles from this period tended to have terrible theatrical prints, but Shout! Factory's Blu-ray of Cheech and Chong's Next Movie looks great in its 1080p, 1.85:1 widescreen presentation, which shows off the locations so well one can almost smell them. The mono DTS-HD Master Audio is also unexpectedly robust, English subtitles are offered, and the disc is Region A encoded.

Included is an interview with good-natured Marin (no Chong, alas) who provides interesting background on the act and the early stages of the team's movie career. There's also a trailer and radio spots.

Next Movie's humor percolates and bubbles up gradually, the laughs deriving from characterizations more than sight gags or one-liners, but when it's humming the film is almost uniquely hilarious. It's not consistently so, but Next Movie-as-artifact from a type of comedy no longer welcomed in this politically correct age of ours, it's like a breath of weed-filled air. Recommended.