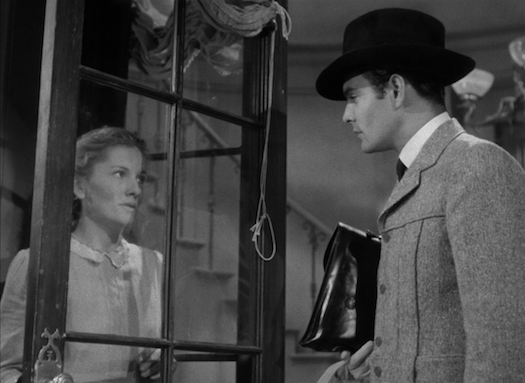 Max Ophüls will always have a spot in the cinematic canon, if only for his sumptuous swan song, Lola Montès. Ophüls has directed plenty of acclaimed films, but this work exists in a weird corner of cinephilia where it is probably more often publicly championed than privately watched. His most famous films exist in a rarefied space -- period settings, aristocratic characters, meticulously realized mise-en-scène -- that make them appear unduly demanding of viewers. These are melodramas, but not "low art."

The story of Ophüls's newly reissued Letter from an Unknown Woman (1948) is simple and economical, but also maddeningly oblique and enigmatic. This approach is complimented by Ophüls's tendency to never give his actors any juicy close-ups, preferring to track their movements with his famously elaborate dolly shots. He allows us to trail after these people, but he is literally keeping them away from us. Rather than being a drawback, this opaqueness enriches the story and draws viewers into the film's highly particular, somewhat uncanny world.

The story is framed by the titular letter, sent to Stefan Brand (Louis Jourdan), a formerly promising pianist who has become a hopeless reprobate. When first glimpsed, a drunken Stefan is getting ready to leave town to duck out of a duel, proposed (we are left to assume) by the husband of some poor woman that Stefan has no doubt wronged. When his mute valet (scene stealer Art Smith) presents him the letter, Stefan is struck by the first line:

"By the time you read this letter, I may be dead."

The "unknown woman" who authored this line is Lisa Berndl (Joan Fontaine), and through her letter, she offers the secret history of a life lived for one cause. Lisa has loved Stefan since she was a girl and he first moved in to the same building as Lisa's family. Lisa watches Stefan from afar and nearly swoons whenever she hears him play the piano. She notes Stefan's tendency to share the company of numerous different women, but she doesn't let that dissuade her.

Even if Joan Fontaine doesn't physically resemble a 12-year-old girl -- despite the best efforts of the hair, make-up, and costume departments -- she transforms her face into a mask of childish naïveté and curiosity in this early section of the film. As the film progresses, and Lisa supposedly grows up, Fontaine's expressions often suggest the child that once was. This is disarming, but it also reveals potentially darker implications about Lisa's love for Stefan.

Because of its layers of potentially unreliable narration -- are we seeing the film through Lisa's eyes, or Stefan's, as he reads the letter? -- the film lays itself open to be interpreted as a tragic story of star-crossed love, with Lisa meeting up with Stefan a few times over the years, but never kindling that fiery, passionate romance they both deserve. Another read -- the one which made better sense to me -- reveals Lisa to be a poor, deluded stalker who holds a too-rosy image in her mind of the talented but cheaply womanizing Stefan, who is incapable of love as Lisa envisions it. Jourdan is so naturally charming that we, like Lisa, want to think the best of Stefan, but a leopard cannot change his spots.

In the end, the film allows the "true" Lisa to remain unknown, even to us viewers. 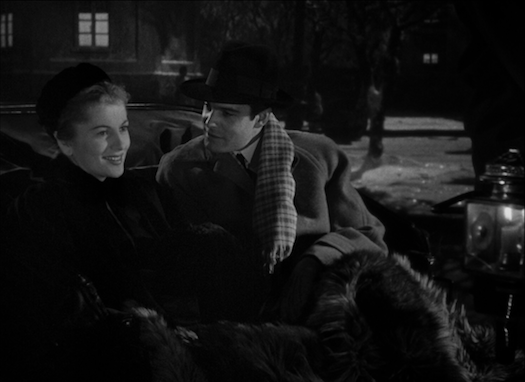 The Blu-ray
The Olive Signature version of Letter from an Unknown Woman comes in a limited edition of 3500. It comes with a booklet featuring photos and an essay by film critic Molly Haskell.

The Video:
Like their recent reissue of A New Leaf, one of the big selling points of this new Letter from an Unknown Woman disc is its major A/V upgrade over Olive's 2012 Blu-ray release. Sourced from a new 4K scan, this AVC-encoded 1080p 1.37:1 transfer is, in a word, mouth-watering. Detail and depth are to die for. The print image is crisp and clean, with film-grain well-resolved. When I went to take screencaps for this article, some freeze-frames looked kind of noisy, but, in motion, this looks perfect.

The Audio:
Setting aside expected limitations due to age, this disc's DTS-HD MA 2.0 mono audio is fully satisfying. Dialogue and ambience is well-separated. Ophüls was reportedly annoyed by the Hollywood tendency to lay on too much music, but Daniele Amfitheatrof's score never feels overblown, even when it gets loud and lush. One subtitle option: English.

- Artist and Ophüls expert Lutz Bacher offers an in-depth dissection of the production of Letter from an Unknown Woman, stressing the difficulty Ophüls had in trying to put his signature style on the film while working within the demands of his producer and the studio. This is geared toward someone interested in the nuts-and-bolts day-to-day process of making the film. 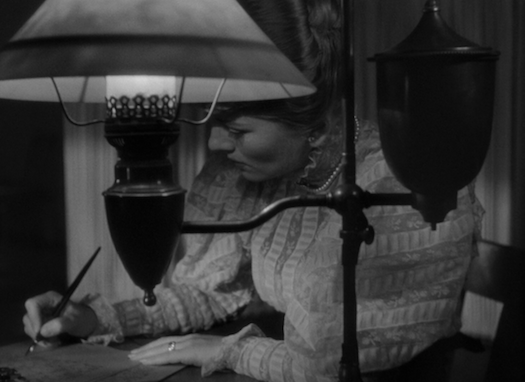