Kino // Unrated // February 20, 2018
List Price: $59.95 [Buy now and save at Amazon]
Review by Stuart Galbraith IV | posted March 6, 2018 | E-mail the Author
Sometimes even a television series as profoundly dumb as The Master (1984) can fill a void in one's viewing habits. A faux martial arts action-adventure, this short-lived series (13 episodes), rather emblematic of mid-1980s TV action, might turn one's brain into cottage cheese, yet it's oddly appealing in other ways.

Predating by six months the unexpectedly popular The Karate Kid, a modest $8 million feature that became a well received $90-million blockbuster, The Master operates from a similar premise. Lee Van Cleef stars as a mysterious ninja guru who takes on 24-year-old pupil Timothy Van Patten, roaming the country (all of which resembles Southern California scrub country) aboard the latter's customized van and partake in various improbable adventures.

Squinty-eyed, hooked-nose, and hawk-faced Lee Van Cleef had specialized playing the third heavy on the right in innumerable ‘50s Westerns, including in his debut film, High Noon (1952). He toiled away in movies and on television for years. He seemed to be everywhere, with a good supporting role in Roger Corman's low-budget It Conquered the World (1956), for instance, but he never quite working his way up to character star, let alone a leading man. But, finally, he struck gold playing the mysterious, sympathetic protagonist opposite Clint Eastwood in Sergio Leone's For a Few Dollars More (1965), and worked again with Eastwood and Leone, this time as the villain Angel Eyes in The Good, the Bad, and the Ugly (1966). Eastwood scurried back to Hollywood, never to return, but Van Cleef remained in Europe, becoming a huge star there, headlining some of the best Spaghetti Westerns, notably The Big Gundown (1966), Death Rides a Horse, Day of Anger (both 1967), Sabata (1969), and The Grand Duel (1972). Returning to America, he appeared as Yul Brynner's character, Chris, in The Magnificent Seven Ride! (1972), a weak, cheap-looking sequel, at about the same time Brynner was playing Van Cleef's Sabata role in that series' second sequel, made in Europe. Director John Carpenter put Van Cleef to good use in Escape from New York (1981), but Van Cleef's unique appeal seemed to baffle casting agents.

He's not really a good fit for The Master, either. Van Cleef's screen presence was all about the threat of violence, of gunning somebody down in cold blood, not third-rate chop-socky action moves. His knee shattered in a ‘50s car accident, and more recent heart surgery necessitated finding a stand-in for the uniquely compact, wiry, bald actor missing part of one finger and sporting bushy gray sideburns, resulting in surreally unbelievable stunt doubling. And, yet, Lee Van Cleef is a pleasure to watch, the actor clearly relishing the leading role on an American TV series.

Creator Michael Sloan, who'd soon move on to the much superior The Equalizer, packs The Master with entertainingly goofy situations and a dizzying array of guest stars. One-off 007 George Lazenby, of On Her Majesty's Secret Service, turns up in one episode as a British spy in a tuxedo who drives an Aston Martin DB-5, helping the stars battle terrorist David McCallum. And one can only imagine the loopy casting genetics that resulted in burly, pit-bull-faced Claude Akins playing the father of demure, 21-year-old Demi Moore. 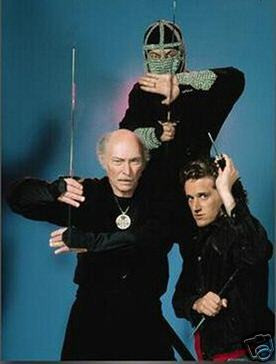 The pilot episode is cut for the usual hour format but plays like it might have been shot as a 72-minute TV movie for a 90-minute slot. Certain story elements make little sense, as if crucial exposition were cut out, though the action is very nearly non-stop. Van Cleef plays John McAllister, World War II vet who remained in Japan after the war, training as a modern-day ninja. Leaving the order to search for a stateside daughter gone missing, McAllister signs his own death warrant, with former student Okasa (Sho Kosugi), determined to assassinate him.

Meanwhile, free-spirited drifter Max Keller (Van Patten), who drives around the countryside with his pet hamster (yes) rescues Holly Trumball (Demi Moore) from lascivious redneck Sheriff Kyle (Bill McKinney), a corrupt lawman in the employ of slimy developer Christensen (Clu Gulager). Christensen wants the airstrip owned by Holly's father (Claude Akins). When Sheriff Kyle corners Max in a bar, McAllister turns up, nearly destroying the bar with his ninja moves much like Jonathan Winters with his bare hands trashed that gas station in Mad Mad World. Suitably impressed, easy-going Max all but begs McAllister to train him in the ninja arts. Now, admit it - aren't you just a little curious to see The Master now?

McAllister's introduction in Japan and later flashbacks there are limited to a single set, probably a Los Angeles-based Japanese garden or maybe the grounds of Yamashiro, the Hollywood Hills restaurant often used by filmmakers. Ninja disappeared from the Japanese landscape two centuries even before the last samurai, and the gimmick of modern-day ninja lacks any sense of authenticity. It's more an outgrowth, the last gasp, really, of the type of genre popularized by Bruce Lee, mainly in Hong Kong movies a decade earlier. The show's writers and designers might have done well to study the colorful iconography from Japanese-made ninja movies of the 1960s, which show much imagination despite their budgetary limitations. Instead, most of the costumes and weapons have only a passing resemblance to the real historical articles, and how they were used.

The half-brother of Dick and Joyce Van Patten, the much younger Timothy at this point in his career had facial features and a likeability akin to a young Sylvester Stallone. His character narrates the stories with much self-deprecating humor. Emblematically an ‘80s-type but not quite a "Brat Pack" star, Van Patten is not exactly handsome but projects an agreeable confidence and affability. He gave up acting in 1990 to become a television director, where he's enjoyed considerably more success, helming episodes of such prestigious shows as Homicide: Life on the Streets, The Wire, numerous episodes of The Sopranos, and Game of Thrones.

As for directors of The Master, the series culled movie/TV veterans like Sidney Hayers and Gordon Hessler, noted for their action genre work, and even Enter the Dragon director Robert Clouse for one episode. Compared to most ‘80s TV shows The Master crams more action set pieces into each hour episode than most shows.

Fortunately The Master was both shot and edited on 35mm film (rather than finished on tape, like way too many American series from that period onward). This allows the 1.37:1 high-def image to look really great on Blu-ray, episodes of The Master looking like cheap B-movies, but movies nonetheless. The DTS-HD Master Audio mono is more than adequate, adding a bit of life to Bill Conti's title track. The 13 episodes are spread over three discs, so there's lot of room on this region "A" release, though an episode guide insert would have been nice. No Extra Features.