City Of The Dead: Remastered Limited Edition, The

John Llewellyn Moxey's The City of Dead (original U.S. title: Horror Hotel) is rarely if ever included in this summa cum laude from the Class of 1960, but it should. For such a spectacularly cheap film (₤45,000, or about $128,000) it's exceptionally well made and still effective all these decades later. Even more intriguingly, it coincidentally shares myriad elements with Black Sunday and especially Psycho. The City of the Dead was shot in the fall of 1959, and all three pictures were released within a few months of one another in the late-summer/early-fall the following year, so it's definitely not a case of it imitating the others.

VCI released a pretty ghastly, unwatchable Blu-ray of The City of the Dead in March 2016. Although the label has made its share of video mastering mistakes through the years, they've also been unusually earnest in fixing problems that arise, and their new 2K remastering of this fine film is most welcome indeed. 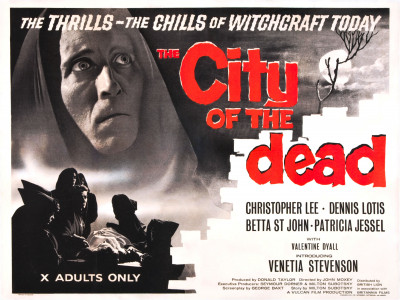 The story opens in 1692, in the Massachusetts hamlet of Whitewood, where Elizabeth Selwyn (Patricia Jessel, later the domineering matriarch of the film version of A Funny Thing Happened on the Way to the Forum) is condemned as a witch and about to be burned at the stake. As the flames approach, she makes a pact with Satan and curses the town's descendants.

In the present day, pretty university student Nan Barlow (Venetia Stevenson), interested in the history of witchcraft, is encouraged by her overzealous professor, Alan Driscoll (Christopher Lee, with wobbly American accent), to visit Whitewood, his hometown. She makes her way to the perennially fog-shrouded village, stopping to pick up another visitor, creepy Jethrow Keane (Valentine Dyall), along the way. The movie audience recognizes him as the warlock in the prologue in league with Elizabeth Selwyn, who turns up herself (again played by Jessel) as Mrs. Newless, the owner of the Raven Inn where Nan is staying.

Nan ignores the warnings of blind Reverend Russell (Norman Macowan) and further clues provided his daughter, Patricia (Betta St. John), the only normal people in Whitewood. It soon becomes apparent to the audience, but not soon enough for Nan that a coven of witches and warlocks, led by Elizabeth/Mrs. Newless, intends to sacrifice the young virgin at midnight on Candlemass Eve.

(Spoliers) The City of the Dead's prologue bears an extraordinary resemblance to the opening to Bava's Black Sunday and is nearly as visually sumptuous. Even more remarkable, however, are the picture's many similarities to Psycho, most obviously in its innovatively unsettling decision to kill off the apparent heroine midway through the picture. Further, in both movies she checks into creepy, far off-the-beaten-path accommodations, where at one point she strips to her underwear (risqué stuff for a 1960 English-language movie). After this character's murder in both films her concerned boyfriend and a worried sibling retrace her steps, aware she might already be dead.

The City of the Dead, was effectively, the first feature from Hammer rival Amicus Productions, though producers Milton Subotsky and Max Rosenberg were calling their company Vulcan Productions at the time.

However, the real heroes of The City of the Dead are its art director, John Blezard, and especially its director, John Llewellyn Moxey (born 1925). It was Moxey's first feature, and though he'd direct occasional theatrical features after, including a half-dozen Edgar Wallace mysteries, he became stamped as a TV helmer, directing episodes of shows like The Saint and the ITV Play of the Week. Around 1968 he moved to America and began working there, initially more episodic television before becoming known as an efficient director of TV-movies, a niche in which Moxey was notably prolific. (David Lowell Rich seems to have been his only rival for that crown.) It's a shame he was so typed, or maybe he preferred the steady employment TV offered, but either way The City of the Dead is a remarkable first feature. It's genuinely creepy throughout with a particularly suspenseful climax.

Moxey and art director Blezard turn the puny budget to their advantage. While the 17th century buildings of Whitewood are obviously false fronts, sets crammed against soundstage walls, the thick, pervasive fog not only hides their deficiencies but also gives the town a unique, heavily stylized oppressive atmosphere that's enormously effective. The interior sets of the inn and elsewhere are very believably period. Corman's later The Haunted Palace (1963) not only has a similar plot, but seems to directly be emulating the look of The City of the Dead, with similarly designed soundstage exteriors, though filmed in color and ‘scope.

Subotsky and Rosenberg likely figured an American setting would help this British production's box office chances, though it was only a moderate success. Lee's accent is more odd than convincing, while the rest of the British cast vary between good mid-Atlantic accents and unchanged British ones. Jessel and Dyall are notably excellent, full of menace, with Dyall's gravelling yet melliferous voice coming off especially well.

VCI's earlier Blu-ray had been a DNR'd mess of epic proportions but their new Blu-ray looks great, the black-and-white (1.66:1 original theatrical aspect ratio) image full of detail and nuance. Remastered in 2K the presentation is of the complete, uncensored British version, and the PCM mono is also above average.

Repurposed supplements include a long interview with Christopher Lee (who died in 2015), who also provides an audio commentary track, and there's a theatrical trailer.

VCI got it right this time so don't miss out. The City of the Dead is an underrated horror film, a miracle, almost, of low-budget filmmaking and Highly Recommended.