Reincarnation of Peter Proud, The

Kino // R // May 29, 2018
List Price: $18.88 [Buy now and save at Amazon]
Review by Stuart Galbraith IV | posted June 16, 2018 | E-mail the Author
I hadn't seen The Reincarnation of Peter Proud (1975) since its network television premiere 41 years ago. Back then, the movie seemed vaguely unsatisfying, but I was curious enough to try it again via Kino's new Blu-ray. Alas, my memories of the film are stronger and more accurate than I expected they would be, and the film doesn't play any better now than it did then, though a lot of nudity and sexual content undoubtedly cut for the network TV broadcast is on full display here.

The picture has a lot of smallish problems that eventually add up. Curiously, two big faults come from talent normally quite reliable, J. Lee Thompson, whose direction even of lower-budget movies is generally at least workmanlike; and Jerry Goldsmith, whose musical score is inapt and distracting. Some of the performances aren't good, and the screenplay, by the author of the original novel from which it's based, Max Ehrlich, doesn't adapt well as a film, the dialogue and imagery perhaps read better than it does as a movie. 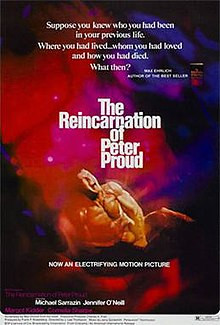 A Southern California university professor, Dr. Peter Proud (Michael Sarrizan) and his girlfriend, Nora (Cornelia Sharpe) are troubled by his recurring nightmares, during which Peter sweats profusely, dreams he's another man from the 1940s being murdered, and in his sleep seems to speak in the man's deep voice.

He visits various psychiatrists and sleep disorder clinics to no avail, but one evening chances upon a television documentary, "The Changing Face of America," which includes footage shot somewhere in Massachusetts of the same places occurring in his dreams.

Dragging along Nora, he rents a car and drives all over the state, in search of what increasingly seems to be a past life. Not long after Nora tires of his obsession and flies home (just about the same time the movie audience is ready to give up, too), he locates town and looks up the woman who "murdered" him in his past life, Marcia (Margot Kidder), now a reclusive alcoholic in her 50s, cared for by her adult daughter, Ann (Jennifer O'Neill).

Initially, Peter flirts with Ann hoping to find out more about her mother and late father, but gradually the two fall in love, even though, in one sense, she's his "daughter."

Although novelist Ehrlich had a background writing television scripts, including a not very good episode of Star Trek ("The Apple"), his and Thompson's visualization of Peter's dreams is far too literal: flash and jump cuts into the past, during which the audience very quickly gets that Marcia murdered her unfaithful husband, she beating him to death with an oar while he's skinny-dipping. As such the audience never really doubts Peter is the reincarnation of the murdered man, and the answers to the mystery of his nightmares is plainly obvious from the opening scenes. That it takes Peter nearly half the movie to even reach the Massachusetts town tests the audience's patience.

Once there, the story becomes more intriguing but still not very good. Neither the script nor the direction seem to have a handle on the dramatic conflict, namely the incestuous implications of Peter falling in love with Ann. The direction and script curiously find this and other unsavory aspects erotic rather than problematic. In another decidedly politically incorrect scene, Margot Kidder's character masturbates in the bathtub while recalling a brutal rape. There's a lot of nudity at the beginning with actress Sharpe, too, and even though actress Debralee Scott (playing a next-door neighbor) doesn't strip, Thompson crudely makes sure the camera gets a tight close-up of her behind.

The Reincarnation of Peter Proud might have addressed some of the issues it raises with more intelligence and subtlety. Initially Peter comes off sympathetically, but later on his obsession finds him cruelly mining Ann for information, of withholding his real intentions from her, shrugging off her troubled mother's alarm, and so forth. The script doesn't seem to be suggesting that his misogynistic past life is taking over his personality (so common in such stories) yet his actions seem needlessly reckless and uncaring, and his fate a tiresomely predictable self-fulfiling prophecy.

Sarrazin, who seemed to specialize playing similarly troubled, slightly sad characters, is fine, as are Neill and especially Margot Kidder, who despite inadequate makeup almost convinces the audience that she's a middle-aged boozer. Sharpe, though gorgeous, is not a very good actress, and some of the lesser roles and even some of extras appearing onscreen come off badly. The film was shot by Bing Crosby Productions, possibly intended for release through Cinema Releasing Corporation though in the end it was distributed by AIP, the R-rated film atypical for that drive-in specialist. The Massachusetts locations are attractive, but the production exhibits some clumsiness here and there.

Curiously licensed from Paramount (rather than MGM, inheritors of most of the AIP library), The Reincarnation of Peter Proud mostly looks pristine, except during the first 30 minutes or so, when several negative scratches running down the middle of the frame prove a minor distraction. The DTS-HD Master Audio mono (English only) is fine, and English subtitles are provided on this Region "A" disc.

Kino has more aggressive of late in offering more supplements to even lesser titles like this, nonetheless frothing with supplements. Included is a thoughtful and well-researched audio commentary with Lee Gambit; a Spanish Super-8 version of the bathtub scene with Kidder, as well as a side-by-side comparison with the release version (alternate, tamer cuts in the Spanish cut); trailers, TV & radio spots, and an animated image gallery.

The Reincarnation of Peter Proud has a couple of good performances and a decent idea or two, but as drama it's neither convincing nor very compelling. Rent It.