Kino // Unrated // June 12, 2018
List Price: $19.99 [Buy now and save at Amazon]
Review by Stuart Galbraith IV | posted July 2, 2018 | E-mail the Author
Back in the 1970s I was friends with an extremely talented, award-winning stop-motion animator who'd rhapsodize over Jack the Giant Killer (1962). For him, like all stop-motion animators, Willis O'Brien (King Kong) and Ray Harryhausen (The 7th Voyage of Sinbad) were gods, but nevertheless he had a soft spot for producer Edward Small's garish but entertaining rip-off of 7th Voyage. The movie had been virtually unseen for more than a decade, but he knew the opening title music by heart and would vividly describe its stop-motion highlights.

Sometime later, Jack the Giant Killer turned up on VHS. I rented a copy and rushed home to see it. Later, when I told my friend that I found the musical numbers highly intrusive and, well, extremely odd, he thought I was nuts. "There aren't any songs in the movie," he insisted. "Well, there are now," reported I.

Kino Lorber's excellent new Blu-ray of Jack the Giant Killer sorts out the confusion over this, as well as offering a vastly improved high-def transfer that, frankly, turns what was pretty unendurable tripe on VHS and DVD into something that's actually pretty entertaining. I watched it with my ten-year-old daughter, and she was thoroughly enchanted. 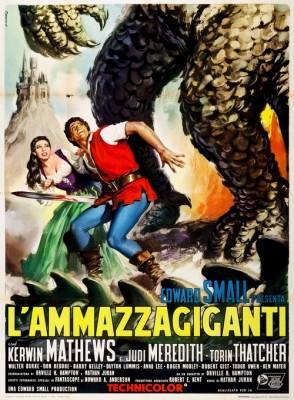 Years after evil Sorcerer Pendragon (Torin Thatcher) and his hordes of witches and hobgoblins have been banished from the Duchy of Cornwall, he returns disguised as a foreign prince paying tribute to the newly-crowned Princess Elaine (Judi Meredith). He presents her with what everyone believes is a mechanical doll, a dancing jester. But that night Pendragon, assisted by his popeyed dwarf, Garna (Walter Burke, short but hardly dwarfish), executes his plot to kidnap Elaine. Using his magic, Pendragon transforms the jester into a horned giant (virtually identical to the cyclops in 7th Voyage, but with two eyes).

The giant nearly makes it to the ship Garna has standing by, but a young peasant farmer, Jack (Kerwin Mathews), manages to slay the beast. The grateful King (Dayton Lummis) knights Jack and, fearing Pendragon's return, orders him to accompany Elaine to a convent where she can go into hiding. However, Pendragon sends his army of witches to the ship they're sailing aboard, kidnapping Elaine and killing the captain in the melee. The rest of the scurvy crew scurries back to England, setting Jack and the Captain's son and/or cabin boy (the script isn't clear about this), Peter (Roger Mobley), adrift. They meet up with a lusty Viking, Sigurd (Barry Kelley), and his bottled-up imp (Don Beddoe), a leprechaun, and the foursome travel to Pendragon's island castle in hopes of rescuing the princess.

Despite its blatant attempt to emulate Sinbad's success, going so far as to hire that film's director (Nathan Juran), star (Kerwin Mathews) and villainous lead (Torin Thatcher), on its own terms Jack the Giant Killer is pretty entertaining, if unmemorable. Further, it has original qualities all its own and subtle, pleasing differences from that earlier picture. Pendragon's hoard of witches and hobgoblins, for instance, apparently designed by makeup master Charles Gemora (his final credit) are genuinely creepy and original, their varied designs far more contemporarily nightmarish than anything being done in the early 1960s. When first introduced in Pendragon's castle they're unsettlingly freakish, though greatly overused by the end of the picture.

Mathews later expressed regret for playing Jack as a much gentler, less assertive character than his earlier Sinbad, but the his natural gentle charisma adds a subtle layer of humanity that the film really needs. Judi Meredith lacks the pixyish charm of Sinbad's Kathryn Grant, but she and Mathews have good chemistry, and later in the film when Pendragon casts a spell and turns her into a pale-faced, snaked eyed witch, the makeup and Meredith's acting are impressively unsettling.

What's most fascinating about Kino's new Blu-ray, however, is how much more entertaining the film plays in its new HD transfer. It always seemed dull as dishwater in previous home video incarnations, both visually and in the telling. The new transfer, arguably better than Sony's 7th Voyage of Sinbad Blu-ray, is miraculous sunny, cherry and colorful, the bright primary colors of the sets and costumes give it the air of the Disney-Harryhausen hyrbid family film is was always intended to be, rather than the dreary, cheap-looking knock-off it always seemed before.

The special effects benefit, too, particularly some of the optical animation, as when magical spells fly from Pendragon's fingertips. The stop-motion scenes look great as well. There are fewer, Dynamation-type composite shots, so the clarity is generally excellent and the presence of heavy grain is minimal. Conversely, the design of the stop-motion armatures is generally poor, and the improved image only accentuates this. None of the creatures featured in Jack appear anatomically plausible, the way they always do in Harryhausen's films. The monsters here are rubbery with cartoony faces, and their movements are awkwardly animated more because the joints of the armatures never seem to be quite where they should be. Some of the other effects work is, admittedly, pretty terrible, and the scale is far too ambitious for such a modesty-budgeted movie, but what's there is generally admirable.

Jack unquestionably lacks Sinbad's narrative elegance, but in substituting a pastiche drawn not just Sinbad but a host of other movies (the 1940 Thief of Bagdad, for instance), virtually nonstop action and a parade of showy (if undernourished) set pieces, kids and the kid-at-heart won't mind.

The picture more or less disappeared for many years, reemerging as an ersatz musical. Recut slightly with new opening titles, the new version, created in 1970s but unreleased for the most part until the early 1980s, elaborately dubbed songs into dialogue scenes, vainly trying match lyrics to the actors' lip movements. It's appalling in the extreme but fascinating in small doses for its sheer chutzpah.

As noted above, Kino's remastered 1.66:1 widescreen Blu-ray is a marked improvement over MGM's non-anamorphic, flat letterboxed Blu-ray. Some have noted that the stop-motion effects, shot in the old silent format, needed to be slightly repositioned shot-by-shot and apparently this was not done, leading to some awkward framing here and there. I subconsciously noticed this, but my daughter, overwhelmed by it all, certainly did not. Given the state of the film elements, it still gets high marks. The DTS-HD Master Audio is also very good. English subtitles are provided for this region "A" disc.

In addition to the 91-minute "musical" version supplementing the 94-minute original theatrical release, the disc includes an informed and appreciative audio commentary by busy Tim Lucas, who provides an enormous amount of fascinating background information about the production. A trailer is also included.

A fun family film, and for SPFX buffs now a feast for the eyes, Jack the Giant Killer is Highly Recommended.