The Criterion Collection // Unrated // October 2, 2018
List Price: $25.99 [Buy now and save at Amazon]
Review by Stuart Galbraith IV | posted November 5, 2018 | E-mail the Author
As lean and lithe as its middle-aged star, The Naked Prey (1965) is an intensely gripping, genuinely harrowing survival thriller, a prime example of how ingeniously pared-down storytelling can keep an audience glued to the screen better than your average CGI-heavy, high-concept blockbuster.

Based on the experiences of mountain man-explorer John Colter's "run for the arrow" narrow escape from Blackfoot Indians in 1809 Wyoming, The Naked Prey shifts the action to the African veld, with a 19th century safari guide running for his life after his client royally pisses off a native tribe.

Originally released by Paramount, presumably intended as a follow-up to their successful overseas distribution of Cy Endfield's great Zulu the year before, The Naked Prey shares some similarities to that film, but also reflects the unusual interests of its star-producer-director, ‘40s matinee idol Cornel Wilde. 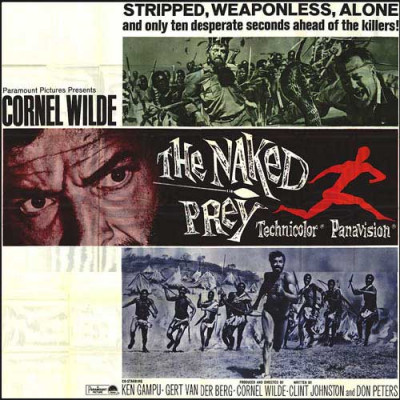 One of the film's many unusual qualities is its dearth of conversation. After the first twenty minutes, little dialogue there, its protagonist, identified on as "the Man" (Wilde) barely says anything at all. His native African pursuers talk among themselves, but that dialogue goes unsubtitled.

In the opening scenes, the Man serves as a guide on a safari-ivory hunt sponsored by two white men (Gert van den Bergh and Patrick Mynhardt). The Man is disgusted by one of the bloodthirsty hunters in particular, who boasts of killing the most elephants that day, no matter that many carried no ivory at all. Later, entering a local tribe's territory, the white hunter flatly refuses to offer tribute for safe passage, despite the Man's dire warnings that he should comply. Bad move, White Hunter.

Soon after, the safari is attacked, overwhelmed by the local tribesmen, who then sportingly subject the men and their bearers to the most gruesome deaths imaginable. The lucky ones are merely beheaded or beaten over the head with a rock. One is dressed as a chicken and chased by the laughing women of the tribe and mercilessly skewered. Most horrifying, though, is one hunter's fate: encased in mud and made to resemble a pig, he's roasted alive on a colossal spit.

Perhaps sympathetic to the Man's position, they award him a very long shot at survival, stripping him naked they give him a brief head-start before the tribe's top warriors make sport of him.

Wilde was 52 at the time of filming but extremely fit for his age without appearing unnaturally muscular. An Olympics-grade fencer in the 1930s, Wilde stayed in shape through the years, believably playing trapeze artist in DeMille's The Greatest Show on Earth (1952). In The Naked Prey, the Man's acceptable ruggedness, combined with his established experience as a safari guide, allow the audience to completely accept his slim chances against a half-dozen or so native warriors.

As a Hollywood star, Wilde peaked in the mid-1940s, with A Song to Remember (1945), Leave Her to Heaven (1945), and Forever Amber (1947). His career in decline in the ‘50s, he formed a production company with his actress-wife, Jean Wallace, commencing with the above-average noir The Big Combo (1955), directed by Joseph H. Lewis. Eventually Wilde himself began directing his productions in addition to producing and starring in them.

These movies were variable in quality and often not financially successful but always interesting. Wilde clearly tried to balance commercial considerations with intelligence and frequently an offbeat approach to the material, and like The Naked Prey they usually rise well above exploitation trappings. Here, for instance, the film hammers home the basic savagery of nature, of which man is not immune, intercutting the big chase and the Man's attempts to find nourishment with other animals of the veld graphically killing one another to stay alive. This footage, most of it apparently stock scenes, is like something out of a "mondo" documentary from that era, but Wilde draws parallels that are as undeniable as the footage is upsetting to watch. Even more than Zulu, The Naked Prey is sympathetic to the African position, as well as the Man's immediate troubles. Indeed, by the end of the picture, the audience, almost without realizing it, learns more about the warriors chasing the Man than they do about Wilde's character.

Beyond the absence of typical movie dialogue, which must have helped the film's international marketability, Wilde's direction is occasionally very imaginative. When the tribe advances upon the safari, the Man turns his head slightly and the camera dollies up into a tight shot of his ear, before cutting to a similarly tight shot of the leader of the raiding party. The rest of the time Wilde does an exceptional job making clear the characters' spatial relationships: the audience always knows how far away the hunters are from the hunted.

I was a little startled to see The Naked Prey final cost at nearly $650,000. The movie certainly could have been made for perhaps one-third that amount, but in retrospect the money's there on the screen in terms of its rich cinematography and careful coverage for editing purposes; clearly, Wilde took his time making it. Filmed in Panavision, Criterion's Blu-ray looks fabulous, nearly pristine. (I wonder, though, why they didn't remove the distracting hair-in-the-gate dancing around the bottom of the frame in one shot.) The mono audio, which makes use of native African music, is likewise excellent.

The supplements are mostly repurposed from the label's 2007 DVD version. They include an audio commentary by Stephen Prince; John Colter's Escape, read by actor Paul Giamatti; the original soundtrack cues created by Wild and Andrew Tracey; a trailer; and a insert essay by Michael Atkinson.

Tense and grisly but exciting and intelligent, The Naked Prey is a DVD Talk Collector's Series title.