Dick Cavett Show: And That's The Way It Is

S'more Entertainment // Unrated // December 18, 2018 // Region 0
List Price: $13.99 [Buy now and save at Amazon]
Review by Stuart Galbraith IV | posted February 19, 2019 | E-mail the Author
Talk show host Dick Cavett (b. 1936) is rightly remembered as having one of the very best talk shows on television. His unusual combination of Yale-educated intellectualism and Nebraska-bred midwestern ordinariness, a kind of perpetual state of halting slight embarrassment, charmed audiences. They appreciated his self-deprecating humor and, most significantly, his eclectic guests. His smart conversations spurred many guests who'd rarely (or never) turn up on The Tonight Show, "Joey Bishop" or "Mike Douglas": esteemed writers, firebrand political activists, out-of-the-mainstream rock stars, and reclusive actors like Brando and Katharine Hepburn.

These sets, which included introductions and reflections from Cavett himself, were all culled from 1968-74 ABC series, and included the entire episodes, which often featured other, completely unrelated guests, often just as interesting.

Two brand-new sets, from S'More Entertainment, less successfully attempt something similar. "And That's the Way It Is…" focuses on newscasters Walter Cronkite, Tom Brokaw, Diane Sawyer, Barbara Walters, Dan Rather, and Mike Wallace, and is a two-disc set. "Inside the Minds of … (Volume 1)" is a single DVD that looks at stand-up comics Robin Williams Bobcat Goldthwait, Richard Lewis, and Gilbert Gottfried. The newscasters set includes several shows from the ABC years, but both use material from The Dick Cavett Show's later incarnations, on PBS (1977-82), the USA Network (1985-86), and CNBC (1989-96). 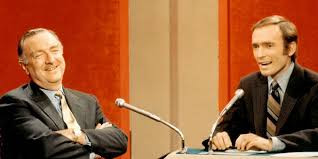 The excitement and great satisfaction this reviewer had for those earlier Shout! Factory releases gave way to vague disappointment for the S'More titles. While definitely worth seeing - Cavett has a knack for pulling interesting interviews out of not-so-promising guests - S'more's choices seem, well, rather odd. Walter Cronkite was certainly a giant of broadcasting, though two shows devoted to him (from 1974 and '82 is stretching it a bit), and Dan Rather had a storied career as a reporter long before he replaced Cronkite when the latter retired. But Tom Brokow? Barbara Walters? Major names in network television news, certainly, but is there really an audience of dwindling DVD buyers aching to see extended interviews with them? And speaking of dwindling numbers, how many even remember Cronkite?

The appeal of Cavett's show was that his guests often were newsmakers, and many of his best shows were with politicians and activists who shaped the late-1960s through early-‘80s. Wouldn't it have been wiser to build a boxed set around them, as opposed to those who reported their movements or merely anchored evening newscasts?

Robin Williams is an obvious choice to lead in the single-disc set on stand-up comedians, with two episodes devoted to his manic humor. And, yet, this set too disappoints in curious ways. Comedians like Williams and Gilbert Gottfried are always "on," and the extreme nature of their style undercuts any and all attempts at something resembling a probing interview or dissection of the art of stand-up comedy. To his credit, Cavett goes along for the ride swimmingly, playing straight man to their outrageousness. But these shows also had me longing instead for a better-chosen mix of talent; with nearly three decades of programs and guests to choose from: Bobcat Goldthwaite? Really?

(A different style of comedian, certainly, but I still fondly recall Phil Silvers's multi-episode appearance on Cavett's PBS series. I only saw it then, in 1982, but have never forgotten it.)

Another odd point about these shows, the later ones derived from the years Cavett worked for MSNBC is their threadbare appearance. Done on the cheap, they look one slight step above something one used to find on "public access" cable television, with Cavett and his guests crammed into the tiniest of studios. Somewhat incredibly, they managed to fit a live studio audience, albeit one of about 15 or 20 people, seated in folding chairs. Though Cavett interacts with his audiences in much the same way he did in his ABC days, the low production values are distracting and even mildly depressing.

The episodes on both sets are about what you'd expect, shot on videotape and presented in 4:3 format. The discs are all-region, though no subtitle options are available. The newscasters set runs nearly five hours while the comedians set clocks in at a little over two hours. No Extra Features

The Shout! sets proudly joined my DVD library years ago, and are revisited frequently. These two new sets, while marginally worthwhile, are more along the lines of something that might grab one's attention on YouTube and, once watched, are quickly forgotten. For those with an interest in their subject matters, they're mildly Recommended.