Kl Studio Classics // Unrated // March 26, 2019
List Price: $29.95 [Buy now and save at Amazon]
Review by Stuart Galbraith IV | posted March 12, 2019 | E-mail the Author
German-born Hollywood director Douglas Sirk (1897-1987) made films of all kind after fleeing the Nazis in 1937. He helmed film noir more than any other genre, but also biographies, comedies, Westerns, and even a musical or two. Today, however, he's best remembered for his 1950s melodramas at Universal-International, particularly Magnificent Obsession (1954), All That Heaven AllowsWritten on the Wind (1956). Glossily stylized, those movies explored (and generally criticized) ‘50s mores in ways that many critics and audiences of the time misinterpreted, popular though they were. Later, these movies were embraced by gay men particularly as high camp. They saw them as over-the-top hysterical ruminations of 1950s conservatism, made even more ironic by the presence of star Rock Hudson in all three. Publicly, Hudson was still in the closet but his homosexuality was widely known in Hollywood and in the gay community.

For the uninitiated, The Tarnished Angels (1957), which reunites the stars of Written on the Wind - Hudson, Robert Stack, and Dorothy Malone - is not dissimilarly stylized, yet quite different from these earlier contemporary melodramas. For admirers of those pictures, The Tarnished Angels requires some viewing readjustment. Adapted from William Faulkner's 1935 novel Pylon, it's a period film set in the highly competitive world of barnstorming, and as bleak and despairing a film as Hollywood ever made in the 1950s. 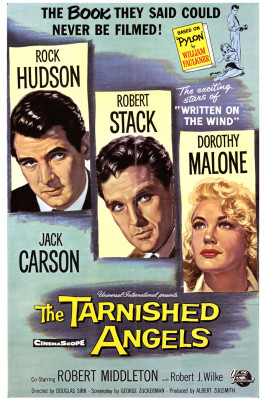 In 1930s New Orleans during Mardi Gras, alcoholic newspaper reporter Burke Devlin (Rock Hudson), in search of a story, visits a Gulf-side carnival where he soon compulsively immerses himself in the gypsy-like lives of barnstormers, finding poetry in their hand-to-mouth lives. He ingratiates himself into the world of plane racer Roger Shuman (Robert Stack), a World War I flying ace and member of the famed Lafayette Escadrille. As addicted to dangerous flying as Devlin is to drink, he neglects his beautiful wife, LaVerne (Dorothy Malone), a parachuter, and son, Jack (Christopher Olsen, the boy from The Man Who Knew Too Much), whose parentage is unclear. Rumors abound that he might be the son of Shuman's mechanic, Jiggs (Jack Carson), who's openly in love with LaVerne, but who also idolizes Shuman, as does Jack, who spends his time aboard the carnival's airplane ride whenever his father is aloft.

In contrast to their seemingly glamorous lives, they live like paupers and are so financially desperate Shuman admonishes Jiggs for wasting precious funds on a pair of boots. Devlin invites everyone to stay at his modest apartment. Unimpressed with Shuman's progress, his editor orders him off the story and Devlin, by this time already drinking heavily, abruptly quits.

A mid-air accident between Shuman and another flyer kills the latter and destroys Shuman's plane, leaving the unhappy band even more desperate. Incredibly, Shuman asks LaVerne to flirt (and possibly even bed down) with Matt Ord (Robert Middleton), a fat, beetle-browed rival sponsor who's only current plane is far from air-worthy. Jiggs doubts it can be fixed at all, let alone before the next race, but Shuman forces both Jiggs and LaVerne to cede to his seemingly inevitable death wish.

Filmed in CinemaScope and black-and-white, The Tarnished Angels' greatness is difficult to pinpoint. Like Sirk's earlier trifecta of masterpiece melodramas, it's not "movie real" in the modern sense or even the 1950s Hollywood sense. Much of the dialogue, most notably a supposedly extemporaneous poetic monologue about Shuman at the end, may be quoting Faulkner but is nothing like the way people talk in "real life." But like those earlier Sirk pictures there's a resonating emotional core to each of the main characters that plays searingly authentic.

From Shuman, willing to sell out his family and oblivious to his responsibilities to them, to Jack, mercilessly teased by insensitive adults and forced to sleep on the floor in flophouses and denied a proper education, The Tarnished Angels chokes with lost souls. LaVerne fell for Shuman after seeing his image papered onto the side of a barn in her small Iowa town, but his daily brushes with death, including scraping the pylons marking the race course, are experiences he cannot share with her or anyone else. Jiggs worships the ground she walks on, but she has no interest in his lapdog-like devotion. Devlin likewise is attracted to the beautiful but perpetually sad-eyed platinum blonde, but soon realizes he can't compete with her loyalty to a husband that has little use for her.

Sirk's direction subtly underscores all this personal tragedy. After one particularly shocking plane crash, long after all the looky-loos have departed and the wreck is unceremoniously pulled from the Gulf, Sirk slowly pans to a couple making out in a car, as if the salvage operation and search for the dead pilot were a drive-in movie.

Few film formats take to Blu-ray as well as crisp black-and-white CinemaScope, and The Tarnished Angels, licensed to Kino from Universal, is a fine example, if a bit contrasty, perhaps by design. Generally, though the 2.35:1 image looks great, supported by strong DTS-HD Master Audio (2.0 mono), and optional English subtitles. Region "A" encoded.

This reviewer has frequently complained that in wanting value-added content to their Blu-ray releases, Kino has cast too wide a net, handing audio commentary jobs for very little money to people not really up to the task. For The Tarnished Angels however, they were lucky to land writer Imogen Sara Smith, who very clearly put a lot of effort and scene-specific preparation into her commentary track here, which is very clearly and intelligently scripted, densely loaded as it is with astute observations. More tracks by Ms. Smith would be most welcome.

One of director Douglas Sirk's finest films, and here given a strong high-def transfer and supplemented with one of Kino's best audio commentary tracks in a long while, The Tarnished Angels is a DVD Talk Collector's Series title.