There are some who say M. Night Shymalan's formula has gotten old, but with a few exceptions his movies continue to hook me. However, Glass didn't exactly blow me away, despite thinking that Unbreakable was brilliant and its follow-up Split was pretty intense. I'll just start out by saying that I won't be able to avoid including spoilers for those two movies so if you haven't seen them you may want to stop reading- I also advise anyone to see those before watching this one, as it doesn't stand very well on its own and might leave you more confused not knowing what these characters did previously or why you should care about them. 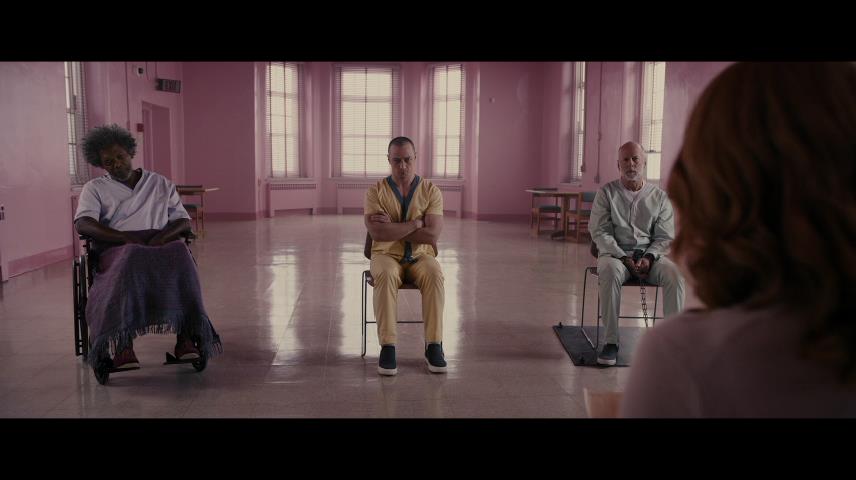 Having said that, the big surprise about Unbreakable, after its rather cryptic mention of comic books in opening text, was that Bruce Willis' character David Dunn discovered that he has "superpowers" and that Samuel L. Jackson's Elijah Price (also known as "Mr. Glass") is likewise a comic-book style villain- having a rather odd weakness of fragile bones but also able to "mastermind" evil events. Split introduced Kevin Crumb (James McAvoy), a kidnapping psycho with multiple personalities but also able to transform into "The Beast", a strong vicious being with a primal desire to eat human flesh. As this new movie begins he's captured a group of cheerleaders, but this time David is actively trying to find and rescue them- why he didn't do the same for the girls in the last movie is anyone's guess. Though he was mostly absent there, we find that lately he's become sort of a secret vigilante known as "The Overseer" by some- working with the help of his son Joseph (Spencer Treat Clark returning from the first movie). His rescue effort here results in both him and Kevin being captured however and locked up in a mental facility, where coincidentally Elijah has already been spending the past few years.

The movie gets a bit silly from here- Dr. Staple (Sarah Paulson) specializes in the mental disorder of thinking that one is a superhero, has been working with Elijah for a while and now starts working with Kevin and David. She eventually brings all three of them together, apparently not considering any sort of safety issues that might come up by doing this. It's here that David sees Elijah for the first time since Unbreakable. Elijah seems to be re-invigorated by this meeting especially by the potential he sees in Kevin, and magically escapes his room and into Kevin's (it isn't shown exactly how he does this, even though the security cameras supposedly captured it) for visits. Meanwhile Kevin's victim from Split Casey (Anya Taylor-Joy) becomes sympathetic towards him, as they had both suffered from abusive relatives, and pays him a visit in order to help him rather than ensure that he stays locked up. I've liked Shyamalan's previous movies for their intensity and suspensefulness as you wonder what the next big ‘twist' is going to be, but that feeling was mostly missing here. There still are a few twists that may or may not be surprising, but the movie kind of drags and the conclusion isn't even very satisfying. Mr. Glass even plans a big showdown that doesn't even end up happening, instead settling for a much smaller conclusion. Still, if you liked the previous two entries skipping this one just makes them feel incomplete. 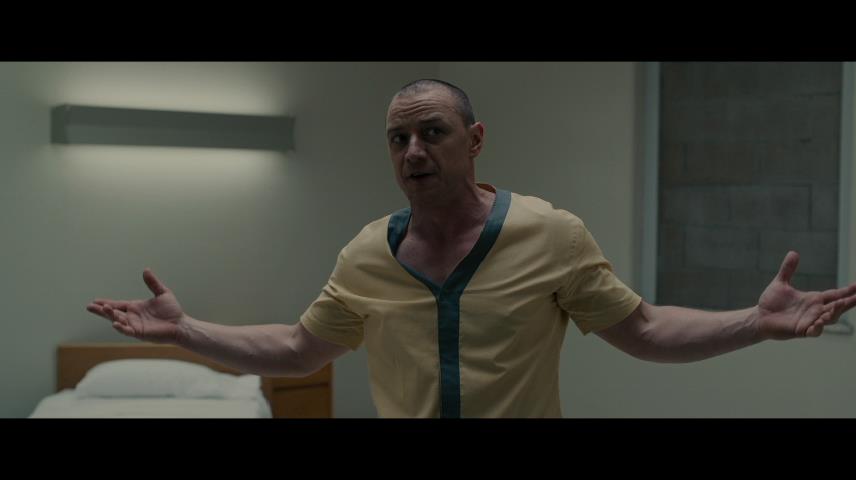 Glass keeps the 2.35 aspect ratio of the previous movies, shot with digital equipment. While the appearance is mostly film-like, the absence of grain and such lessens the atmosphere compared to Unbreakable. The Ultra HD format may actually add to the overly-clean look of this movie. Details are clearer than they likely would have appeared on film, mainly those of the old and deserted buildings. (Interestingly, the institution seen here is an actual one in Allentown that had closed a few years before this movie was shot.) Colors are rather light, with subtle changes in the color scheme throughout. A 1080p Blu-Ray disc is also included which appears slightly less detailed compared to the 4K disc.

Both discs include a Dolby Atmos audio mix (you will need to have Secondary Audio on your player switched off for it to output properly; the Blu-Ray includes menu sound effects.) Like many of Shyamalan's other films, most of it is quiet and you'll need to keep your volume at a decent level in order to hear the dialogue. There are good atmospheric sounds in all channels throughout, including the panning of some voices and sounds to the rear channels. French and Spanish dubs in 5.1 are also included, and the Blu-Ray includes a descriptive audio track. Hearing-impaired, French and Spanish subtitles are included as well. 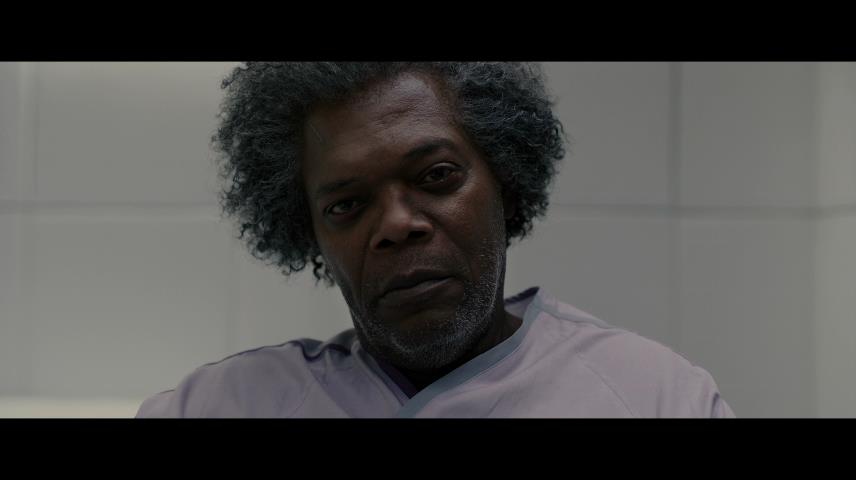 About 20 minutes' worth of deleted scenes are included, with introductions for each one from Shyamalan. He explains that the original cut ran over 3 hours long, but leaving in some of these might have made for a better movie in the end. The rest of the extras are short segments, each running under 3 minutes long and clicking on each one to view is a bit tedious- especially since these are not in HDR while the disc menu screen is, so on some equipment there will be a loss of picture as the display switches back and forth. These segments cover the main and supporting characters, stunts, music score, and a look back on the years between shooting Unbreakable and this movie- Shyamalan remarks that the kids of some of Unbreakable's crew members have worked on Glass.

Only the Blu-Ray disc includes opening previews: Seven in Heaven, Fighting With My Family, Doom: Annihilation and Arctic. 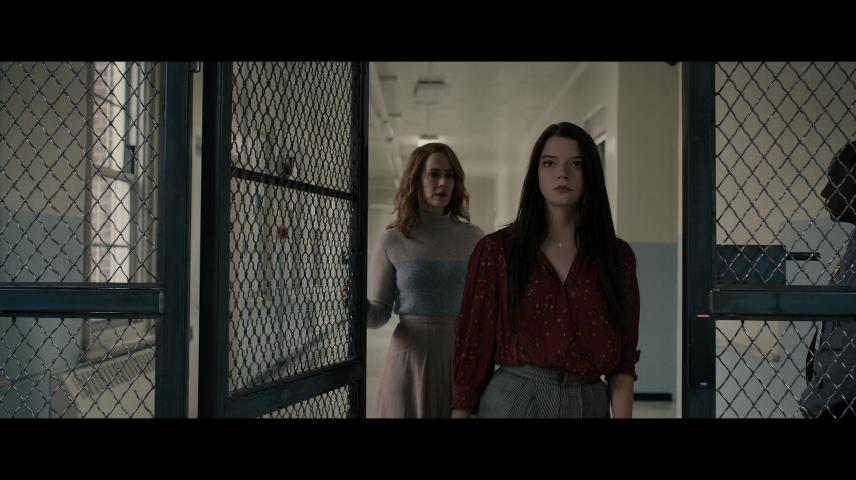 I personally found Glass to be a bit of a let-down after the previous two movies that led up to it, despite my general forgiveness for M. Night Shyamalan's approaches that others have criticized him for. The main cast all turn in good performances however, especially McAvoy's multiple personalities that he seems to switch in and out of seamlessly. Despite its flaws this should certainly be seen if you liked Unbreakable and Split and if you have those two in your collection you need this to complete it, however the movie does not stand well on its own and is likely to confuse viewers who have not seen those first.