Kl Studio Classics // Unrated // August 6, 2019
List Price: $19.98 [Buy now and save at Amazon]
Review by Stuart Galbraith IV | posted September 9, 2019 | E-mail the Author
One of director Billy Wilder's best yet lesser-known comedies, A Foreign Affair (1948) is both sweetly charming yet also bitingly satirical, even brutal, in its depiction of early postwar Berlin. It features a very fine performance by Marlene Dietrich, and male lead John Lund is also good, but the film belongs to the radiant Jean Arthur, whose comic timing just dazzles. Both women were in their late-forties; indeed, it was Arthur's penultimate film, she retiring from the screen after Shane (1953), though she did a little bit of TV work after that.

Written primarily by Wilder and his associate of the period, Charles Brackett, the satirical targets - soldiers fraternizing with one-time Nazis and Soviet occupiers, buying and selling on the black market, while military brass try to bamboozle members of Congress sent to investigate - is slyly understated, the story's dizzying romantic triangle always front-and-center. Wilder's signature structuring and writing style is apparent throughout. And, watching it again for the first time in 15 or so year, I was struck by its coincidental similarities to Carol Reed's The Third Man, released the following year. That film's complex triangle of Joseph Cotten, Alida Valli, and Orson Welles in many respects mirrors the characters here, respectively, played by Arthur, Lund, and Dietrich, with all three genders flipped. More on this below. 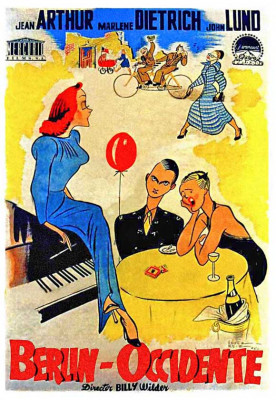 Shortly after the war's end, a congressional committee is dispatched to Berlin to investigate troop morale. Among the congressmen is conservative, unmarried Iowa Republican Phoebe Frost (Arthur), prim, proper, and full of steely-eyed determination. Shocked by the devastated urban landscape, the once-great metropolis bombed almost out of existence ("Gosh!" she exclaims, viewing the destruction from the air), Phoebe is further appalled by American soldiers freely buying and selling goods on the black market, and using candy bars and cigarettes to pick up loose young women.

Eventually, she sets her sights on torch singer Erika von Schlütow (Dietrich), suspected of being the former mistress of a high-ranking Nazi. In one very funny scene, Phoebe is shown a German newsreel of Erika cavorting with Adolf Hitler himself. Phoebe enlists fellow Iowan Capt. John Pringle (Lund) to help in her investigation, unware that Pringle is Erika's secret American lover, who turns him on precisely because she is a Nazi whore. Pringle, wanting to protect Erika as well as himself, out of desperation woos old maid Phoebe ("Who wants perfume," he asks, "Give me the fresh wet smell of Iowa corn, right after it rains!") but, over time, he unexpectedly falls for her also.

The aforementioned similarities to The Third Man, set in postwar Vienna, are essentially meaningless but nonetheless interesting. Arthur's is like Cotten's character, searching for answers about Dietrich/Welles, a cold-blooded opportunist, and falls for Lund/Valli, who in turn tries to help Dietrich/Welles, though she/he is merely using them to evade justice.

More significantly, in A Foreign Affair, one can see concerns, characters, and story structure that Wilder would refine in later films, most obviously One, Two, Three (1961), with its hilarious Cold War characters and many of the same Berlin locations seen here. Structurally, I was reminded of Wilder's vastly underrated Kiss Me Stupid (1964), in the way Wilder has characters whose "arcs" (as they say today) move in opposite directions. In A Foreign Affair we see naïve, prudish middle-American Phoebe Frost melt and blossom, if belatedly, into full-fledged womanhood, while he starts out as a manipulative heel gradually won over by her innocence. Her assertiveness, limited entirely at first to her determination as a member of Congress, expands to her personal life by the end. (Watch how she turns the tables on Lund in the very last moments of the picture.) Likewise, her limited worldview, heretofore Iowa county fairs and small-town Americana and its mores, is shattered by time spent in a country so defeated, in a city of such depravity, despair, and survival-of-the-fittest that when gas lines are restored dispirited Germans rush to their kitchens not to cook, but to commit suicide.

Other than Millard Mitchell's Col. Plummer, commanding officer and congressional liaison, the three leads are the entire film: everyone else in the story is incidental, and played by minor actors. (Mitchell, however, really connects with Wilder's precision dialogue. Had he not died of lung cancer at age 50, one imagines Wilder might have called him back for later films.)

Jean Arthur is a wonder. Though she wore her share of slinky silk gowns early in her career, she was rarely ever glamorous in the usual sense, certainly nothing approaching the iconic Dietrich. In A Foreign Affair Wilder deglamorizes Arthur even further, hiding her figure behind tweed suits, her eyes behind glasses and, most absurdly, having her hair styled in the most unattractive manner imaginable, pulled so tightly strands seem really to rip right out of their roots. What remains is Arthur's signature, that uniquely throaty voice, something like a cartoon lady-mouse. As such, her face and voice do 99% of the acting and, like Lund's Capt. Pringle, the movie audience can't help but fall in love with her sweetly-naïve earnestness.

Dietrich's performance is also impressive, even brave, the German-born actress who tirelessly helped Jewish refugees, sold war bonds, and made USO appearances in support of the Allies, here portrays a complex German hiding her Nazi past to survive in a defeated Germany, where a simple mattress to sleep on is a luxury. Dietrich convinces the audience (though not Pringle) they she's genuinely starved for sex and affection; each is aware they're using the other. As Erika, Dietrich can be cold as only Germans can, cruelly insulting Phoebe's looks while looking her right in the eye. She's desperate but dare not show it, displaying instead a look of casual entitled corruption. It's an underrated performance. Only Wilder, the most unsentimental master of romantic comedies, would deny Erika an ounce of sympathy. But he does, and the character is razor-sharp for it.

The credits state "large portions" of the picture were filmed in Berlin, and so it was, though it appears that none of the stars actually went there to film any of it; all the Berlin footage appears second unit, albeit under Wilder's supervision. However, he does an unusually good job hiding this fact, integrating studio sets, backlot streets, and matte paintings to create a very believable illusion. Even his use of rear-screen projection is imaginative.

Beyond the wonderfully rich, hilarious dialogue Wilder and Brackett give the love scenes, biting, black humor pervades. Mitchell's colonel optimistically talks of vanquishing any lingering traces of Nazism from Germany's youth through good ol' American baseball (a Wilder passion), yet in a later scene Pringle questions the father of a boy who can't stop writing swastikas, defacing everything he encounters. Even Dietrich's songs further Wilder's aims, with lyrics including, "Black Market, Eggs for statuettes, Smiles for cigarettes, Got some broken down ideals? Like wedding rings?"

A Paramount production now owned by Universal, the 1.37:1 black-and-white A Foreign Affair looks great until about one hour and eleven minutes in, when there's an abrupt drop in the picture quality, as if Universal was working with an original negative (or something close to that) for the first seven reels and then had nothing better than something comparable to a 16mm negative for the rest. The movie is just too good to ruin the viewing experience, but it is very noticeable and the last third is in rough shape. The DTS-HD Master Audio (mono) also suffers a bit. Optional English subtitles are provided on this region "A" disc.

Supplements include a trailer but the real prize here is the richly rewarding audio commentary track by Joseph McBride, who has written extensively on both Wilder and Wilder's mentor, the great Ernst Lubitsch. McBride's track is casual yet full of insight and screen-specific observations, as well as personal observations about Wilder, McBride having interviewed him on numerous occasions and even visited the set of one his last films, The Front Page (1974). It's one of distributor Kino's best commentary tracks thus far.

A classic boasting a great script, direction, and performances, especially by Jean Arthur and Marlene Dietrich, A Foreign Affair is a DVD Talk Collectors Series title.