It Always Rains on Sunday

Kl Studio Classics // Unrated // November 5, 2019
List Price: $29.95 [Buy now and save at Amazon]
Review by Stuart Galbraith IV | posted November 22, 2019 | E-mail the Author
An unusual, early postwar British film, Ealing Studios' It Always Rains on Sunday (1947) has been variously described as "the definitive British noir" while also compared to French poetic realism. The film certainly has noir elements, but those make up just one portion of the film, though its tense climax is photographed (by Douglas Slocombe) in that style. And if "film noir" is a nebulous term, poetic cinema is more so. Overall, it does have a style, story, and tone not unlike Marcel Carné's Port of Shadows (1939) so there's that.

It Always Rains on Sunday presents a number of concurrent story threads that sometimes but not always intersect. Set in present-day Bethnal Green, in London's East End, it follows various characters over a single, 24-hour day, beginning early morning on a Sunday and, yes, it does rain that day.

The film was a big commercial success and generally appreciated by film critics of the time, but it didn't make much of a dent when U.S. distributor Eagle-Lion released it in 1949. By the early 2000s, its reputation had grown considerably, and it's now regarded as one of the great British films, and deservedly so. 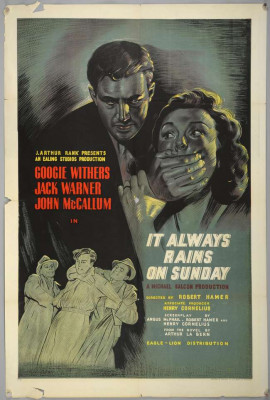 Vi has become involved with married bandleader and music shop owner Morry Hyams (Sydney Tafler), who promises to help the aspiring singer, though he clearly is only interested in sex, while his long-suffering wife, Sadie (Betty Ann Davies), is only too aware of his philandering. Doris, meanwhile, runs into problems with her boyfriend when she's offered a job by a local gangster that may or might not be legitimate.

In other parts of the neighborhood, a trio of inept villains (Jimmy Hanley, John Carol, and Alfie Bass) are broke and trying to unload their latest heist: a gross of children's roller skates. And Detective Sgt. Fothergill (Jack Warner) leads the task force on the lookout of the escaped con, who many suspect will return to his old stomping grounds.

And so he does. Rose discovers Swann hiding in the family's air-raid shelter, and agrees to hide him in her upstairs bedroom until nightfall. The children and Rose's husband will be out most of the day, enabling him to rest while she dries his freezing, rain-soaked clothes. But then what?

It Always Rains on Sunday's screenplay, by Angus MacPhail, Henry Cornelius, and director Robert Hamer, creates a family dynamic interesting in its ordinariness. Rose, obviously so but without ever explicitly expressing it, married George because she was entering middle-age and desired security in her life. He's a decent, kind man, but also clearly no great catch. His older daughters fight with Rose often, they wanting more freedom and less household responsibilities, cooking and cleaning that overwhelm Rose's days. And, further sharing the small, cramped home with George's son, the place is notably claustrophobic.

Neither is Rose's past relationship with Swann romanticized. For her, he was the man that got away, but she also realizes they had no future together, and as much as she still loves him (and thus is willing to harbor the fugitive) she also understands she means nothing to him at all, beyond her willingness to help him escape. There's a wonderful, sad little scene when she offers him the valuable ring he'd given her years before, to hock after he leaves. For her it's a priceless memento of their passionate relationship, but he doesn't even remember giving it to her.

The film's slice-of-East Ender-life may or may not be accurate, but some of it seems so. Intriguingly, many of the characters are explicitly Jewish, though their religion doesn't figure into the story. Londoners, and East Enders particularly, will recognize the well-meaning but nosy neighbors, the bustle of salesmen, rowdy kids, petty thieves, etc. The mix of studio sets and real locations is usually obvious, but they blend together in a movie-realistic fashion.

The picture captures a very specific time and place, yet also seems very modern. Much of what's dramatized would not have been allowed in Production Coded Hollywood: men and women in bed together, a suicide attempt, unfaithful husbands and wives, murder, one criminal act that seemingly goes unpunished.

Withers and McCallum became engaged during the making of It Always Rains on Sunday. They were married for more than 60 years, until his death in 2010, and she died the following year, when both were well in their nineties.

Licensed from Studio Canal, It Always Rains on Sunday is presented in its original black-and-white, 1.37:1 aspect ratio. The transfer is mostly excellent, with strong blacks most apparent during the exciting climax, still thrilling today. The DTS-HD Master audio, mono, is also fine. English subtitles accompany this Region "A" disc.

Supplements include an audio commentary track by film historian Imogen Sara Smith; "Coming in from the Rain," a talking heads featurette noting the film's achievements; a "Locations" featurette; and a trailer, from its Australian release.

Fascinating and still very effective, with many fine performances, It Always Rains on Sunday is a DVD Talk Collectors Series title.