Kl Studio Classics // Unrated // December 3, 2019
List Price: $29.95 [Buy now and save at Amazon]
Review by Stuart Galbraith IV | posted December 2, 2019 | E-mail the Author
Though it's setting the bar awfully low, The Magic Sword (1962) is probably the best movie ever made by director-special effects designer Bert I. Gordon. Best remembered for cheap sci-fi thrillers like The Amazing Colossal Man (1957), Earth vs. the Spider (1958), and Empire of the Ants (1977), Gordon managed a remarkably long career (and life, he being 97 years old as I write this), despite an oeuvre of mostly terrible movies.

The Magic Sword was an anomaly, however, partially a response to stop-motion master Ray Harryhausen's success with fantasy films beginning with The 7th Voyage of Sinbad (1958), but also the general vogue for such pictures in the early 1960s, including all those sword-and-sandal imports from Italy, as well as oddball (but sometimes endearing) productions such as The Wonders of Aladdin (1961), Captain Sindbad (1963), and Irwin Allen's Five Weeks in a Balloon (1962), pictures largely targeted at the kiddie trade.

It's superior to Jack the Giant Killer (1962), a more blatant rip-off of 7th Voyage. The Magic Sword may be garish, inconsistent, and clumsily executed, but it's colorful with much to recommend it. Even the Mystery Science Theater 3000 folks, when running the film, had to admit that it wasn't bad at all. 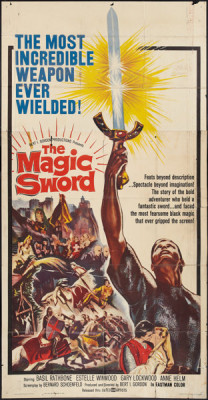 George (Gary Lockwood) is the 20-year-old (human) foster son of Sybil (Estelle Winwood), an ancient, immortal sorceress. George, royal by birth, is in love with Princess Helene (Anne Helm), whose vision he gazes at from a magic pool nearby. However, Helene is kidnapped by a dreaded wizard named Lodac (Basil Rathbone), who plans on feeding her to his dragon seven days hence. Suspicious knight Sir Branton (Liam Sullivan) offers to rescue the princess in exchange for her hand, but George, anxious to rescue the princess himself, tricks Sybil and locks her up in the family cellar, so that he can borrow gifts from her intended for his 21st birthday: a magic sword (of course) and shield, a magnificent white steed, and an invulnerable suit of chainmail. He also frees six knights from faraway lands held in suspended animation. Grateful, they join George and Sir Branton on their quest.

To reach Princess Helene, held at Lodac's castle, they must survive his seven curses, while early on it's clear that Sir Branton is up to No Good.

The Magic Sword is many steps ahead of Mr. B.I.G.'s usual fare. Co-financed by distributor United Artists, it probably cost somewhere in the $250,000-$350,000 range, many times the budget Gordon usually had to contend with. Further, the production looks even more expensive because it had access to the backlot at 20th Century-Fox, including standing sets of castles and the like, as well as Fox's prop and probably costume department. Sets specifically built The Magic Sword are usually pretty obvious because they appear much cheaper.

Another plus is the cast. Gary Lockwood takes his part seriously, never condescending even though a lot of his dialogue is quite awful. His sincerity helps enormously just as Kerwin Mathews's likeminded approach helped sell 7th Voyage and his other genre roles. Top-billed Basil Rathbone likewise delivers a polished, menacing performance of the kind he'd be giving since the dawn of talkies. He was pushing 70, and The Magic Sword is just about the last film in which his commanding voice is still entirely there. By the time he began appearing in AIP pictures, beginning with Tales of Terror, released later in the year, he was notably physically weaker.

Estelle Winwood, as Sybil, is something like comedy relief. Already pushing 80 (she'd keep working until almost her death, at 101), Winwood is given a Lucy Ricardo-type bright red wig, and her silly comical antics, at times, almost play like a scene from The Lucy Show. Maila "Vampira" Nurmi has a rare movie role, two in fact, first appearing more or less as herself playing a sorceress, and later as a hag, wearing an elaborate makeup/mask, presumably designed by Dan Striepeke, who'd soon go on to a major career.

His make-ups for The Magic Sword are wildly variable but some are quite impressive. The "pinheads" kept by Lodac (one is supposedly played by Richard Kiel, but no one onscreen is clearly him) are as believable as the Coneheads from Saturday Night Live, but others are interesting. One brief scene has two of George's companions badly burned, in makeups anticipating Striepeke's design of the Mutants for Beneath the Planet of the Apes. A giant ogre, curiously, appears to be wearing the body suit (but with a different head) that James Cagney wore in Man of the Thousand Faces, though that was made at Universal. Maybe Striepeke knew someone there and borrowed it?

Gordon's effects (created with his wife, Flora) are as variable as the makeup, plentiful but not great. Some optical effects are crude, but overall they're superior to Gordon's ‘50s work, probably at least partly because he had more time and money to realize them. The dragon, saved for the climax, eschews Gordon's usual method of optically enlarging real animals, instead being a detailed puppet. Its mouths never move, but it's still the best of Gordon's movie monsters. (However, it appears that prop-maker Ray Wheat actually designed and built the thing.)

Licensed from MGM, The Magic Sword looks great on Blu-ray, the film listed as 1.85:1 widescreen on the box but actually 1.66:1 on the screen. The movie's single biggest asset is Paul Vogel's cinematography, ablaze with primary colors and lighting akin to Mario Bava's Hercules in the Haunted World. The DTS-HD Master Audio (mono) is fine, and the disc is region "A" encoded.

Beyond a trailer, the main supplement is an audio commentary track by film historian Tim Lucas (joined by filmmaker Larry Blamire). Lucas, as always, knows his stuff, wasting no time on dead-air, cramming it with interesting background and behind-the-scenes information, and astute observations.

More enjoyable than it ought to be, The Magic Sword is a good film for young kids and forgiving adults, and Recommended.