Shout Factory // Unrated // November 19, 2019
List Price: $19.95 [Buy now and save at Amazon]
Review by Stuart Galbraith IV | posted December 18, 2019 | E-mail the Author
When it was new, I remember seeing Chuck Berry Hail! Hail Rock ‘n' Roll (1987) at the cavernous Michigan Theater in Ann Arbor, the 1,000-plus seat audience packed with a lively, appreciative audience, all marveling at the undiminished skill and energy of pioneering singer-songwriter-guitarist Chuck Berry. I mean, the man was pushing sixty! To us 20-somethings in the audience, he was old, as old as the moon, still doing his one-legged hop to "Nadine," still wowing disciples like Keith Richards and Eric Clapton on his Gibson guitar. Imagine - 60!

Now, more than 30 years later, the novelty of a rock ‘n' roll performer old enough to collect social security has worn off considerably. Berry himself continued performing until shortly before his death in 2017 at age ninety. The seemingly immortal Keith Richards is still active at 75, and another of the documentary's interviewees, Jerry Lee Lewis, is still performing at 84, seventy years after he began touring. At one point, Richards, pleading with Berry over an amp not recording properly, begins to argue, "After we're gone…" only to be interrupted by Berry who retorts, "Well then I ain't dying!" He nearly made it.

I thought this sea change in performing might take some of the shine off Taylor Hackford's film, but instead I found myself enthralled more than ever. Nowadays Netflix and other streaming sites are awash with many great documentaries profiling popular music stars, but Hail! Hail! Rock ‘n' Roll remains one of the very best. That it interviews both early stars of the genre as well as then-hot talents of the 1980s so well, including a baby-faced Bruce Springsteen, is itself valuable, but their performances range from very good to positively outstanding. It's a must-see movie. 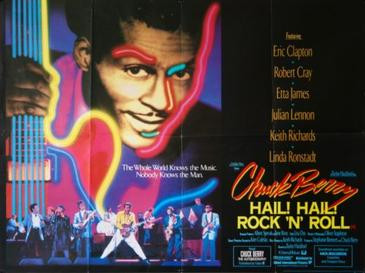 The movie acknowledges but doesn't dwell on the darker aspects of Berry's life: a five-year prison sentence for statutory rape, a later stretch in the slammer for tax evasion, etc. Berry cannily presents himself as an affable charmer, still lean and handsome as he approaches his 60th birthday. Hackford had a terrible time, apparently, filming a subject demanding so much control over how he is presented, but it's easy enough to read between those lines. The first 50 minutes or so alternate between interviews and footage of Berry on tour, playing the now rundown but still jumpin' club where his career began, fascinating too in that these scenes highlight Johnnie Johnson, the immensely talented but humble jazz-blues pianist with whom Berry closely collaborated with for decades.

Then as now, movie audiences will be amused watching Berry touring, much of related by Bruce Springsteen, who anonymously backed one of Berry's shows in the 1970s, when the younger rocker was just getting started. After the payola scandal of the 1950s, in which African-American artists were outrageously ripped off by unsavory promoters and DJs, Berry shrewdly found a way to make a living. He toured with no luggage, just his guitar, and would show up to gigs minutes before he was supposed to go on, backed by whatever local band was available. He'd demand to be paid in full, in cash, and after his set he'd unceremoniously hop back in his car and simply drive away, on to the next gig. After he died, Berry left an estate worth upwards of $50 million.

Eric Clapton marvels Berry's guitar arrangements, eschewing keys friendly to open string guitars and, instead, were more commonly aligned with piano arrangements, contributing to Berry's unique sound. Many of the film's best moments have director Hackford getting Berry in the same room with contemporaries Bo Diddley and Little Richard. Their shared bitterness over the gentrification of African-American rock by white artists like Pat Boone is offset by their mutual admiration of one another (and watching the others amused by Richard's flamboyant energy).

Most of the film revolves around the rehearsals and all-star concert at the 5,000-seat Fox Theatre in St. Louis, an event produced by the Rolling Stones' Keith Richards (appearing high in interview segments), who admires Berry even though the rock legend gives Richards "more headaches than Mick Jagger, though I still can't dislike him."

The concert itself, roughly the last 70 minutes of the movie, is impressively electrifying. Berry, backed by Richards, Johnson, Joey Spampinato on bass guitar, Steve Jordan on drums, Bobby Keys on tenor sax, works through many signature hits, including "Roll Over Beethoven," "Back in the U.S.A.," "Nadine," and, inevitably, "Johnny B. Goode." For that number, Berry is joined by Julian Lennon, probably the weakest of the various guest-star performers, though his appearance links to Hackford's use of archival footage of John Lennon, singing Berry's praises on, I think, an old episode of The Mike Douglas Show.

Better are Linda Ronstadt's vocals on "Back in the U.S.A.," Robert Cray on "Roll Over Beethoven" and "Brown Eyed Handsome Man," and especially Etta James for "Rock and Roll Music." Guitar enthusiasts will be thrilled watching Berry joined by Cray, Richards, and especially Eric Clapton, who clearly treasure big-ego'd Berry's rare acknowledgements of their splendid riffs, and their looks of surprise and amused irritation when Berry pulls a fast one, unexpectedly changing keys in the middle of a tune.

Berry himself dazzles, though apparently many of his songs had to be rerecorded in post-production and overdubbed because the rock veteran shot his voice the night before in an open-air concert performance. In one number his voice is notably scratchier but the dubbing is flawlessly done and not detectable.

Chuck Berry Hail! Hail! Rock ‘n' Roll was apparently photographed using a mix of 16mm and 35mm film stock, for 35mm 1.85:1 widescreen release. At times the image is a tad grainy, but very good considering its 16mm origins, but even on my 10-foot screen the image overall is very impressive. Interestingly, the disc defaults to a 2.0 DTS-HD Master Audio mix that sounds great, but about halfway through the picture I discovered a 5.1 track that delivers more ambient surround but also less front-focus on the music, so I ended up switching back to the 2.0 mix before the end. Optional English subtitles are included on this region "A" disc.

Apparently to max out the bit-rate of the show, all of the extra features are confined to a second Blu-ray disc. Supplements include: director Hackford's introduction for the 2006 DVD release; a fascinating 66-minute making-of documentary; some four-and-half hours of raw interview footage with the various participants; an additional 54 minutes of rehearsal footage; 17 minutes of outtakes with Berry; a trailer; "The Burnt Scrapbook," with Hackford and consultant Robbie Robertson looking through Berry's scrapbooks; and "Final Words" from the director himself. That is a lot of valuable material.