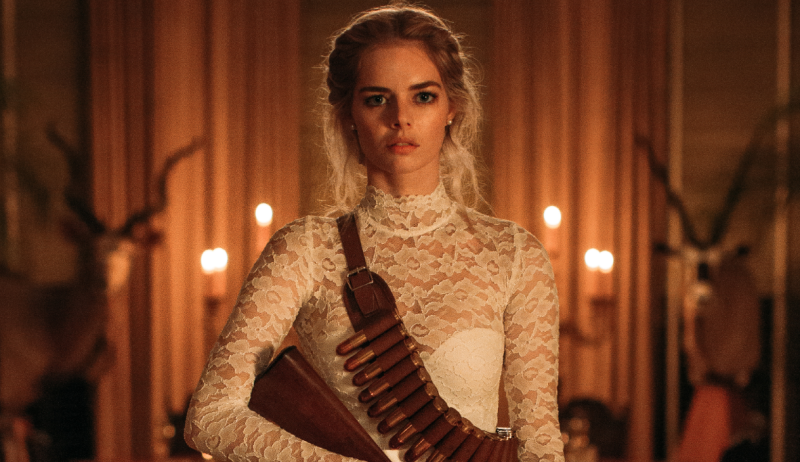 Ah, the holidays. A perfect time for family, fellowship and killing the newest member-by-marriage of the clan with medieval weapons. That is the basic premise of horror/action/comedy Ready or Not, from directors Matt Bettinelli-Olpin and Tyler Gillett, which features a star-making performance from relative-unknown Samara Weaving. After an unsuspecting bride is thrust into a deadly, ritualistic game, she must escape the clutches of an upper-crust family and flee their mansion that quickly becomes a death trap. The film earns its belly laughs, jolts and guffaws with a witty screenplay, razor-sharp black humor, entertaining performances and splatters of gore. Ready or Not is refreshingly up front about its intentions and is one of the most entertaining horror films of 2019.

Gorgeous, normal Grace (Weaving) marries Alex Le Domas (Mark O'Brien) and becomes part of the wealthy family and their gaming dynasty. Alex's father Tony (Henry Czerny) and mother Becky (Andie MacDowell) thank Grace for encouraging Alex to make amends with the family after years apart, but Alex's alcoholic brother Daniel (Adam Brody) warns her to be wary of their haughty charms. Among the remaining wedding guests are Alex's druggie sister Emilie (Melanie Scrofano) and husband Fitch (Kristian Bruun), nasty Aunt Helene (Nicky Guadagni), Daniel's wife Charity (Elyse Levesque), butler Stevens (John Ralston), and several children and maids. The wedding goes off without a hitch, but following the ceremony, Alex tells Grace that she must come downstairs at midnight to play a game. It is tradition when joining the Le Domas household, and it will mean acceptance by the family. Alex appears nervous, but Grace laughs off the idea and agrees to participate. Once situated inside an ornate study, Grace is tasked with drawing a card. Whichever card she chooses will dictate the game. She draws "hide and seek," a game not placed in several decades but one that requires the entire family to arm themselves and hunt Grace until she is dead. If Grace can make it to dawn alive, she will be spared. 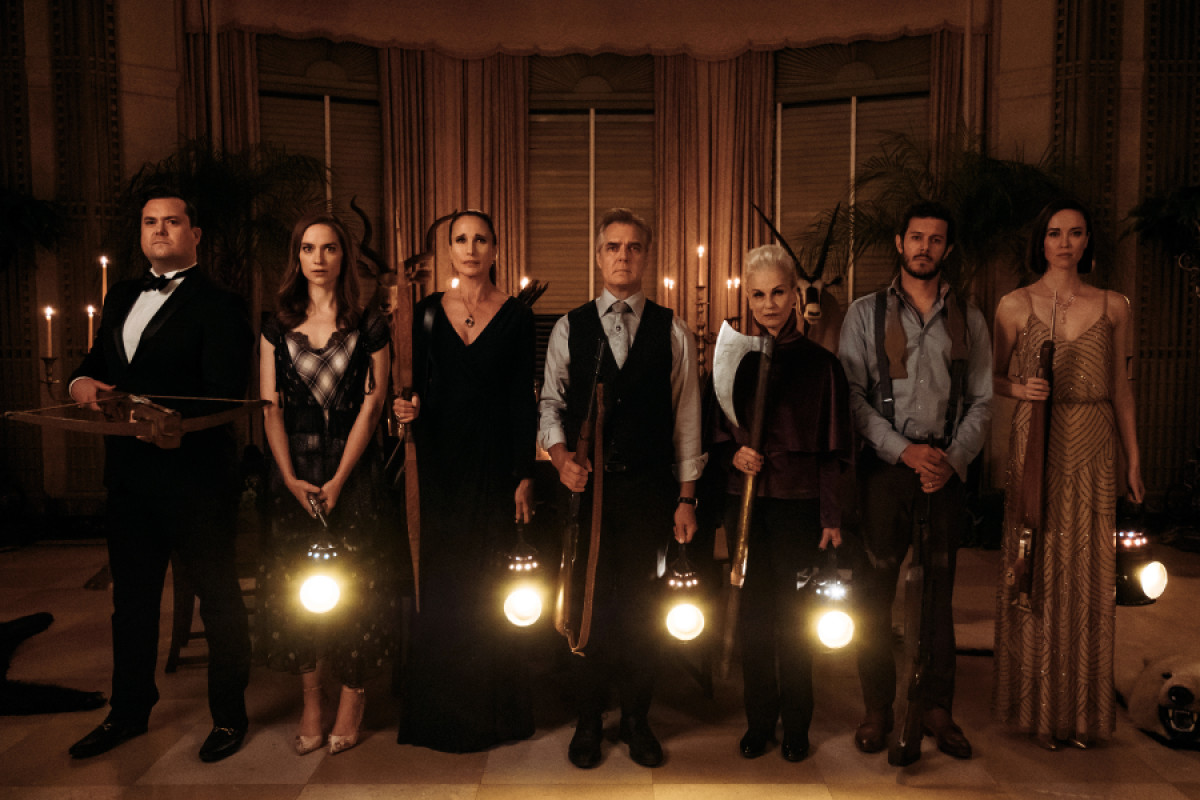 I was unsure whether this clever premise could carry the movie over its entire 95 minutes, but the filmmakers and cast do an excellent job keeping the game bloody fun and the narrative moving at a brisk pace. When Grace witnesses a maid accidentally murdered, she understands the game is no joke and goes from passive participant to pissed off bride, turning the tables on the Le Demos family throughout the night. Ready or Not's cavernous mansion is an excellent set piece, with its untold number of rooms and corridors, and the filmmakers do an excellent job immersing viewers in this space and keeping continuity between rooms. The film is quite funny; particularly when characters accidentally murder and main unintended targets with ridiculous weapons like bows and arrows and battle axes. Part of the joke here is that the wealthy Le Domas crew is totally inept at killing Grace, which gives her moments of reprieve and the ability to fight back.

The performances here are fantastic, particularly Weaving in the lead. The Australian actress is believable both as a frightened victim and determined vigilante, and I suspect we will be seeing a lot more of her on screen very soon. MacDowell, Brody and Guadagni are particularly great, and absolutely nail the slimy, manipulative, terrible characters they are playing. The climax is totally over the top, but it actually offers an interesting explanation for the hide-and-seek proceedings. I would not say Ready or Not is especially scary, but it does offer a number of jolts and unexpected kills. I had an absolute blast with this movie from beginning to end. An excellent blend of action, horror and black comedy, Ready of Not is a surprise hit of 2019.

The 2.39:1/1080p/AVC-encoded image from Fox (now under the Disney banner) is excellent, and supports the often dimly lit film with abundant fine-object detail, superb shadow details and gorgeous, boldly saturated colors. The digitally shot production is graded with gold and orange tones, which add to its distinct, attractive appearance and support Brett Jutkiewicz's cinematography. The majority of the action takes place indoors and at night, and the film looks excellent in motion despite the dim lighting. Skin tones are accurate, fabric and set-dressing textures are strong, and the film looks great in motion. Blur and compression artifacts are completely absent, and the image has a wonderfully thick, film-like appearance.

The 5.1 DTS-HD Master Audio soundtrack fully supports the bumps in the night with an immersive, effects-heavy mix. Dialogue is crisp and never crowded by effects or score. Ambient noise and quiet effects like footsteps and door creaks surround the viewer subtly, while action effects like gun fire, jolts and slams are blistering, receiving support from all surround speakers and the LFE. French and Spanish 5.1 Dolby Digital mixes are included, as are English SDH, French and Spanish subtitles.

This single-disc release includes the Blu-ray and a Movies Anywhere digital copy. Honestly, I'm surprised more studios have not started dropping unnecessary DVD copies like Fox. The disc comes in an eco-case that is wrapped in a slipcover. Extras include a solid, extended making-of, Let the Games Begin: The Making of Ready or Not (42:28/HD), with interviews and behind-the scenes footage; a Gag Reel (4:05/HD); an Audio Commentary by Radio Silence and Samara Weaving; a Gallery (2:25/HD); and the film's Red Band Trailer (2:26/HD). 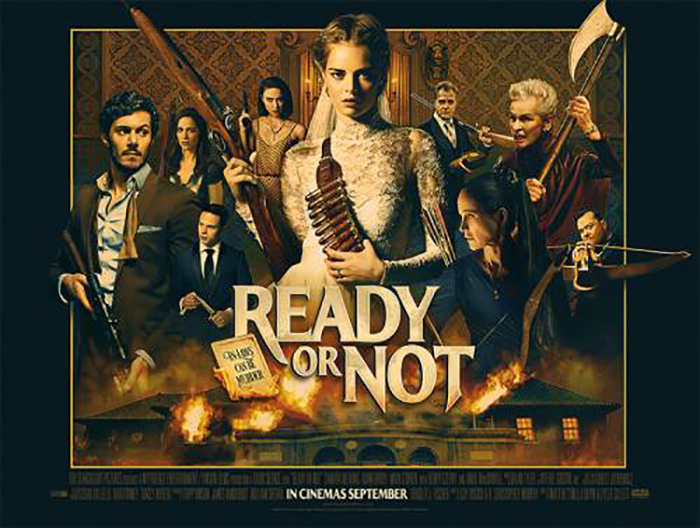 One of my surprise favorite films from 2019, Ready or Not is a fantastically entertaining blend of action, horror and dark comedy, and sees a new bride fighting for her life as her husband's wealthy family engages in a deadly game of hide-and-seek. Fox's Blu-ray offers strong picture and sound and a couple of solid extras. Highly Recommended.