Kl Studio Classics // R // January 21, 2020
List Price: $19.99 [Buy now and save at Amazon]
Review by Stuart Galbraith IV | posted February 4, 2020 | E-mail the Author
One of the best Westerns of the 1970s, Robert Aldrich's Ulzana's Raid (1972) combines elements of John Ford influences, particularly Fort Apache (1948), with Vietnam War allegorical elements like Little Big Man (1970), but from a somewhat more sympathetic U.S. Cavalry perspective. Scottish writer-producer Alan Sharp had an eclectic career, first in the U.K., then in the U.S. where he wrote this and Billy Two Hats (1974), another fine Western. His later credits varied widely, from the awful Damnation Alley (1977) to Sam Peckinpah's muddled The Osterman Weekend (1983), and a long descent into TV movies before reemerging briefly with the fine Rob Roy (1995). He died in 2013. 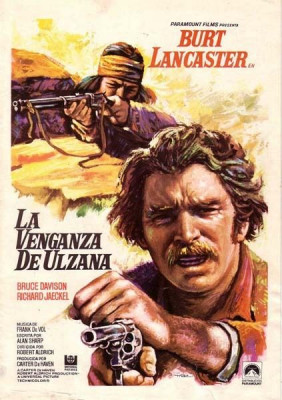 Following abuses by white agency authorities, a small, nine-member war party of Apache Indians, led by warrior Ulzana (Joaquin Martinez) break out of the San Carlos Indian Reservation, intent upon committing acts of terrorism against local homesteaders. In early, deeply disturbing scenes, a trooper escorting a mother and her young son is ambushed. The trooper shoots dead the woman, to spare her from rape (and worse) before killing himself. The gleeful war party disembowels him, playing catch with his still-warm internal organs. Soon after, her husband (Karl Swenson), holes up in his fortress-like home, but is tricked into believing the Cavalry has come to save him; he's burned alive.

The heart of the picture is the relationship between DeBuin and McIntosh and, to a lesser extent, the hardened, never-named sergeant; all three performances are terrific. In contrast to Henry Fonda's martinet C.O. in Fort Apache, DeBuin is both unformed and pliable. He accepts most of McIntosh's sage advice unquestioningly, and because he is the son of a minister begins the journey with the belief that the Apache are God's children, too. Their uncompromising brutality toward the homesteaders forces him to confront his idealistic humanism. By the end of the film, he still can't really reconcile all that he has witnessed.

The character of McIntosh was a Western type few played better than Lancaster. In contrast to Davison's character, McIntosh simply accepts the brutality committed by both sides, trying to outfox Ulzana, who has the clear advantage. There are many unforgettable moments: DeBuin stopping soldiers from mutilating the corpse of a dead Indian, McIntosh explaining to him that the homesteader's young boy was spared not out of sympathy, but merely because killing him would bring the Apache negligible "power" relative to killing a white adult. Killing the boy isn't worth the effort. Later, when a tied-and-gang-raped woman is sparred, it's not out of pity: Ulzana's using her to slow the men down and separate the forces, assuming DeBuin will send her and several men back to the safety of the fort.

The picture falters only in Aldrich's undisciplined directorial choices. He had a long career as an assistant director in the 1940s and early ‘50s, and then worked as a director in television for about two years before graduating to features. A filmmaker only as good as his scripts, his high-points included Kiss Me Deadly (1955), The Flight of the Phoenix (1966), The Dirty Dozen (1967), and Emperor of the North (1973). When the scripts were poor, his movies were close to unwatchable: 4 for Texas (1963), The Legend of Lylah Clare (1968), Hustle (1975), etc. In his weaker films, as well as many of his best ones, including both this and his famous What Ever Happened to Baby Jane? (1962), he exhibits little in the way of a personal style. Many Aldrich features look like inelegant, quickly-shot television films, and even a picture as good as Ulzana's Raid completely lacks the directorial poetry of, say, John Ford. Similarly, for nearly the entirety of Aldrich's career he utilized Frank De Vol, a talented composer but not the best choice for certain genres. De Vol's music here is a hodgepodge of Western genre clichés and works against Ulzana's effectiveness.

But Sharp's script repeatedly rides to the rescue with its combination of complex main characters, moral ambiguity, and Western verisimilitude.

Shot in Aldrich's favored 1.85:1 widescreen, Kino's presentation apparently utilizes the same master as an earlier German Blu-ray release. I found it mostly fine though some digital sharpening and other tweaking is in evidence, though it's hardly ruinous; there's room for improvement, but it's not bad. The DTS-HD Master Audio (2.0 mono) is fine, and accompanied by optional English subtitles. Brief exit music is heard after the end titles. Region "A" encoded.

Supplements include an informative commentary track by Nick Pinkerton; an energetic new interview with actor Davison, who hits all the salient points of interest about the film; director John Landis's appreciative "Trailers from Hell" segment; and a standard-def trailer.