Diabolic // R // February 10, 2020
List Price: $24.99 [Buy now and save at Diabolikdvd]
Review by Stuart Galbraith IV | posted March 2, 2020 | E-mail the Author
Originally released as The Mutations (1974) but known today under its alternate title, The Freakmaker, this is a surprisingly effective, even disturbing horror film, despite its low-budget and exploitative aspects bordering on the distasteful. One of the last traditional horror films of the 1970s, it combines elements from many earlier films, good and bad: Freaks (1932), House of Frankenstein (1944), Konga (1961); and it's similar in other ways to Sssssss (1973), though that wasn't released until The Freakmaker was already in production, so similarities there are probably coincidental.

The movie was made by talent working on a project beneath their abilities, most notably director Jack Cardiff, arguably Britain's greatest-ever cinematographer (Black Narcissus, The African Queen, The Vikings, etc.) and, hidden behind pounds of makeup, an unrecognizable Tom Baker, a few months before taking over Doctor Who. 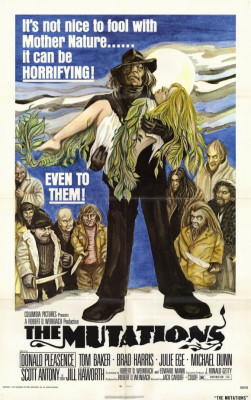 The movie has little in the way of plot. Top-billed Donald Pleasance, in a role intended for Vincent Price, plays Professor Nolter, a genetic researcher and university lecturer, secretly cross-breeding carnivorous plans with unwitting human guinea pigs, using in part the redressed laser prop from Goldfinger (1964). Brad Harris, Julie Ege, Scott Antony, and Jill Haworth are students eventually targeted by Nolter, who keeps a severely deformed assistant, Lynch (Baker), a bitter misfit whose face somewhat resembles the disfigurements of "John" Merrick, the Elephant Man. Like the Hunchback in House of Frankenstein, he supplies bodies for experimentation hoping the scientist will keep his promise to "cure" him someday.

Lynch, as it happens, is also co-owner of the local funfair freak show, which he operates with dwarf Burns (Michael Dunn). While Burns is somewhat aware of his partner's moonlighting, occasionally adding Nolter's failures to the freak show's line-up, he's kind and gentle with the other human oddities while Lynch holds them in contempt.

The Freakmaker is surprisingly unsettling for several reasons. The Battersea Fun Fair locations add a wonderfully authentic, now long-gone seedy air, as do some "stolen" shots filmed in some red-light district part of London. The so-called freaks are a wonder, initially very shocking in a few cases, and yet, possibly because of their background performing in sideshows, they turn out to be quite good actors. Many of director Tod Browning's Freaks came from the European continent, and had accents so thick one could barely understand what they were saying, but those gathered here all seem to have emanated from the U.S. and the U.K. Among those appearing in the film are Esther Blackmon, the "alligator lady," and Willie "Popeye" Ingram, who learned from childhood that he could dislocate his eyeballs from their sockets and "pop" them a good inch from his skull. Genuinely disturbing, that.

British horror movies tend to be fairly weak when special makeup effects were involved, but Charles E. Parker's work here is extravagantly ghoulish. Cardiff wisely limits what the audience sees: a flash here, a shadowy reveal there, but everything -- Lynch's deformed face, the failed first experiment shipped off to the freak show, and finally Nolter's masterpiece, a Venus Fly-Trap man -- are all remarkably grotesque, and blend in with the real human oddities.

The entire tone of the film is both trashy and sophisticated at once. It comes perilously close to distastefully exploiting the "freaks," who as in Browning's film become vengeful murderers after Lynch ruins a birthday party and mercilessly insults them. (So shamelessly imitative of Freaks is this sequence, the freaks nearly begin chanting "One of us! One of us!" as in the 1932 film.) But Michael Dunn's sympathetic, humanist Burns offsets this. His fine acting keeps his and the other characters from being demeaning, or from being demeaned. Sadly, this was one of several films released after his untimely August 1973 death at 38.

The picture opens with five full minutes of macro-photography showing plants rapidly growing in fast-motion, their roots digging deep into the soil and their leaves sprouting, all this is set to Basil Kirchin's weird, unsettling musical score, which has almost Sensurround-like bass tones.

As for the rest of the cast, Donald Pleasance practically sleepwalks through the film until the inevitable climax, when he gives his all like Bela Lugosi at the end of Bride of the Monster, but Tom Baker overcomes the makeup covering three-quarters of his face, makeup so constrictive that when he actually drools when he talks. There's a strangely effective scene near the end, when he visits a prostitute (Lisa Collings) agreeable to his request that she tell him she loves him - for a little extra money.

First released to DVD by Subversive Cinema in 2005, the new Blu-ray from DiabolikDVD boasts a new 1.66:1 widescreen scan from a 35mm theatrical print in good condition. While not as pristine as something derived from an original negative, it's free of damage (exhibiting only reel-change cues) and has good color and contrast. The mono audio is fine and is supported by optional English subtitles. Several glossy postcards with flamboyant artwork (original to this release?) are also included.

Supplements appear to be mostly repurposed extras from the DVD version. They include an audio commentary track with writer-producer Robert D. Weinbach and actor Brad Harris; a featurette including director Cardiff; a trailer and TV spot; and a still gallery with isolated score excerpts.

Derivative yet also uniquely ghoulish, The Freakmaker is a cheap yet effective, outrageous yet genuinely creepy and, for fans of such pictures, Highly Recommended.