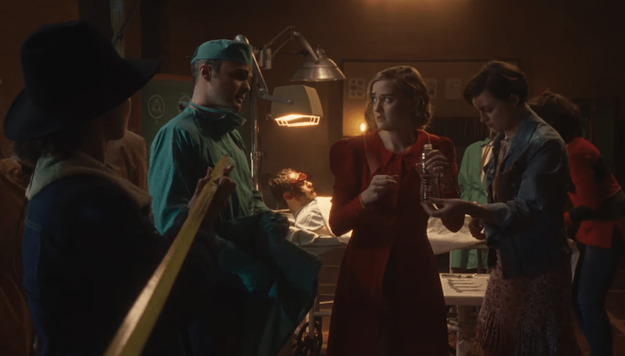 Aaron Schimberg's Chained For Life is a low-key, high-concept film that wrestles with the treatment of physically disfigured people, especially on screen. Writer-director Schimberg creates a meta-comedy, in the vein of Altman's The Player, that takes place on the set of a schlocky neo-Euro-horror flick, where a number of disfigured and disabled characters have been cast for their otherness. Schimberg makes it clear pretty quickly that these folks are nothing to be horrified by, but he is also not interested in feel-good brotherhood. Instead, he reveals a subtle and more complicated dynamic that develops between these actors and the rest of the able-bodied cast and crew.

Jess Weixler (Teeth) is the pretty blonde star of the film... and the film-within-the-film. Her character, Mabel, plays a woman who is being treated by a mad doctor for blindness. In the film being made, the blind woman is supposed to fall in love with one of the mad doctor's "freaks." This role is filled by a man with neurofibromatosis named Rosenthal (Adam Pearson, Under the Skin). Before his arrival on set, Mabel frets quietly over how she is going to relate to her co-star, and their first meeting is initially awkward.

Schimberg intentionally shoots the arrival of the "freakish" cast -- which includes a bearded lady and conjoined twins -- blandly, like an everyday occurrence. This is later counterpointed by Rosenthal's entrance into the horror film, in which his outsized and malformed facial features are literally put in a spotlight that the actor must step into as he says his first line.

The rehearsal for this "entrance" scene is one of the key moments in the film, humorously investigating the intentions of the off-camera filmmaker. Played by ex-child actor Charlie Korsmo (in his first screen role since Can't Hardly Wait), "Herr Direktor" is a would-be-mythic German filmmaker who looks like Fassbinder and talks like Herzog (a clue that maybe he's a phony?), and was supposedly raised in a circus sideshow. The logic goes, well, considering his background, Herr Direktor's use of the disabled cast can't be exploitation. And in coaching Rosenthal to make his melodramatically shocking entrance, Korsmo's character goes on an enormous verbal walk -- incorporating The Muppet Movie along the way -- to avoid telling his actor, "I set up this shot to emphasize how scary your face looks." The director clearly hopes to maintain this idea that he's not misusing Rosenthal for petty reasons, but the movie audience can see the shot and make out the intention pretty immediately. 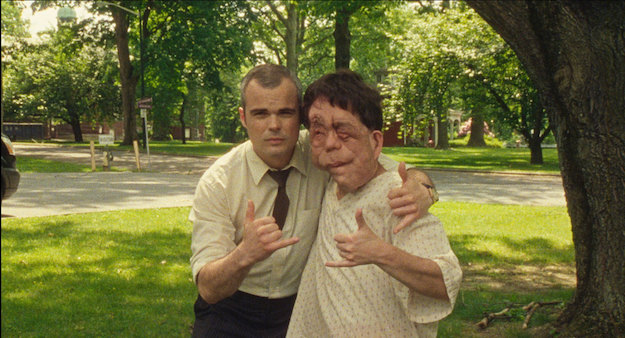 The film is full of little cringe-comedy moments in the which the able-bodied folks surely think they are being cool around their disabled co-stars, but the truth is... well... something else. For example, Stephen Plunkett plays Max, the self-satisfied and traditionally handsome lead, whose attempts to buddy up to Rosenthal strike the same inviting-but-wrong tone as another recent film character's claim that he would vote for Obama's third term.

While Schimberg peppers the backgrounds and the soundtrack with countless contributions from the ensemble, Chained for Life returns always to the main relationship between Mabel and Rosenthal. Once Mabel gets over her initial awkwardness, the pair seem to become fast friends. It doesn't hurt that Rosenthal (and one has to assume, the actor Adam Pearson) is warm, smart, and funny. This isn't a horror movie, but Schimberg pulls off more than his share of successful audience manipulation. At different times, Schimberg makes us want Mabel and Rosenthal to be friends, maybe lovers; at certain points, we're led to wonder if maybe she is just pitying him, or maybe he is just being polite to avoid conflict. Chained for Life doesn't provide hard answers about this stuff, preferring to tease out its questions in unexpected ways instead.

The final few sections of Chained for Life, in which the would-be freaks seize the means of (film) production and create their own narratives, find the film at its most playful and engaging. Schimberg builds up expectations again and again only to subvert them. In many ways, it's provocative and satisfying; however, in quite a few moments, the film strains for cleverness. Many of Schimberg's sequences and cinematic ideas are masterfully executed, but sometimes his ambitions overshoot his ability. Plus, the acting in a few scenes is a little wobblier than one would expect from such a hyper-self-aware production.

Even with those caveats, I'm eager to recommend Chained for Life for its originality and intelligence. You definitely haven't seen something quite like this. 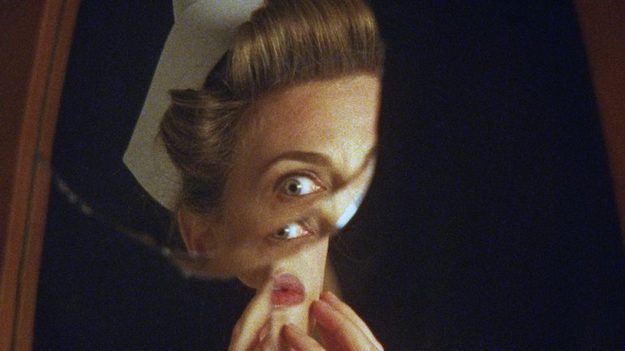 The Video:
This film was shot on 16mm film, which gives it a self-consciously grainy, neo-retro Euro-exploitation flavor. The AVC-encoded 1080p 1.85:1 transfer does a good job reproducing this look. Colors are richly saturated and life-like. Some mild instability in a few dark shots, but mostly the detail and contrast is well-delineated considering the source.

The Audio:
Continuing the retro thing, this film was mixed mono. The disc offers a DTS-HD MA 2.0 mono or a DTS-HD MA 5.1 (center channel only) mono option to listen. Schimberg and his sound team have worked to make this track overflow with Altman-esque chatter and asides during the on-set moments, while focusing on the ambience during the more "horror" moments. It's a well-designed track, and the treatment here seems to accurately and cleanly reflect the filmmakers' intentions. On the subtitles front, an English SDH track is provided.

- "I wanted this section to be boring, and the problem is, I was pretty successful at it. It's fairly boring." Hampered by a cold, Schimberg comes off as grumpy and smart-assed. That gives the track a spark of personality, and Schimberg thankfully does know when to straighten up and discuss aspects of the film seriously.

Final Thoughts:
An original and thoughtfully provocative meta-comedy about the treatment of physical disfigurement in movies. It's not a perfect film, but it falters less often than it achieves brilliance. UK distributor Anti-Worlds has released a Region-Free 2-disc Blu-ray that includes more extras and director Aaron Schimberg's first feature film, so folks who are already fans of Chained For Life might want to spring for that. But newcomers to the film will be more than amply served by Kino's well-made disc; it comes Highly Recommended. 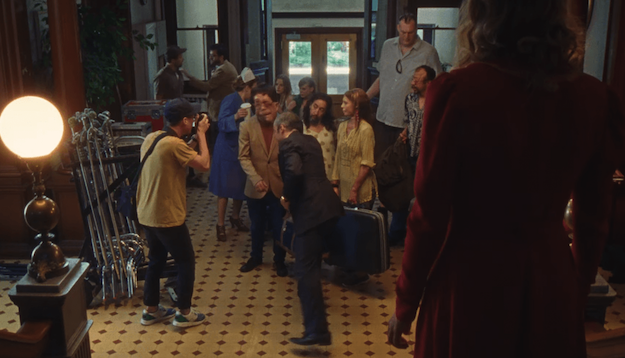