Kl Studio Classics // Unrated // April 14, 2020
List Price: $24.95 [Buy now and save at Amazon]
Review by Stuart Galbraith IV | posted April 6, 2020 | E-mail the Author
Time Limit (1957) is a very locked-in-the-‘50s attempt at Serious Drama. It's filmed in black-and-white, is based on a well-regarded Broadway play, and grapples with ‘50s notions of the Communist threat, loyalty, and military codes of conduct. It was the only movie directed by Karl Malden, who decided afterwards that he much preferred acting instead, and the stagey picture has intriguing plot similarities to John Frankenheimer's later The Manchurian Candidate (1962) -- at least it seems so until the end.

Predictably, the acting is mostly very good and the picture is sincere and tries hard to be about something important and worthwhile. It can't shake its stage origins but it's an interesting effort and worth seeing once. 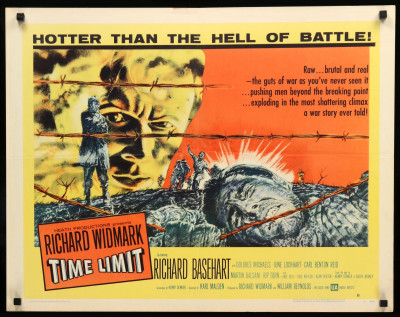 In 1954, Army Col. William Edwards (Richard Widmark, whose company also produced) is investigating the alleged enemy collaborations of Maj. Harry Cargill (Richard Basehart), one of a number of soldiers held for many months in a North Korean POW camp during that war. It's up to Edwards to decide whether to recommend a court-martial.

Cargill is accused of lecturing his fellow prisoners on the virtues of communism, of making radio broadcasts in support of the enemy and, worst of all, falsely confessing to being part of a mission to drop biological weapons on North Korea. To Edwards's surprise and frustration, Cargill emphatically admits all.

Despite pressure from his superior, General Connors (Carl Benton Reid), whose own son died at the camp, to wrap up the investigation, Edwards can't shake the feeling that something is amiss: Cargill had no clear motive to turn collaborator, and seems to have been an ordinary, if intelligent and loving man. Then Edwards's secretary, Corp. Jean Evans (Dolores Michaels), daughter of an attorney, notices strange similarities in the testimonies of the other surviving soldiers, including Lt. George Miller (Rip Torn, in his first major film role). For instance, of the two soldiers that died during their imprisonment, all use the same medical phrasing "they died of acute dysentery" and terminology, word-for-word. What really happened back at the camp?

The Broadway play starred Arthur Kennedy as Edwards, Richard Kiley as Cargill, Thomas Carlin as Miller, and Allyn McLerie as Evans, all fine actors. Their replacements for the film version are also good, though hints of a sweet, budding romance between Evans and Edwards probably would have played better with McLerie than the more conventionally attractive Dolores Michaels. June Lockhart has a good scene with Widmark as Cargill's wife, including a confession about her sex life unusual for a 1950s film. Martin Balsam has an early film role as Widmark's sergeant-assistant, but he's miscast as that pushy, cigar-smoking character.

The one actor from the Broadway play also in the movie is Khigh Dhiegh, as Colonel Kim, the POW camp commander. Though active in live television from at least 1950, this was the actor's first movie role, and from this point on he became typecast playing refined, articulate Asian villains, most memorably in Frankenheimer's Manchurian Candidate and later for many years as arch-nemesis Wo Fat on the original Hawaii Five-O. In fact, the New Jersey-born actor (as Kenneth Dickerson!) wasn't Asian at all, but of Anglo-Egyptian Sudanese descent.

Dhiegh's role in the picture, and the soldiers' identical, robotic explanation of how the two men died back at the camp, can't help but remind viewers of the later Manchurian Candidate, whose own Korean POWs all recite the same line in that: "Raymond Shaw is the kindest, bravest, warmest, most wonderful human being I've ever known in my life." It's like Widmark is playing the Frank Sinatra role from that film, Basehart the Laurence Harvey part, Michaels the Janet Leigh role, and Torn James Edwards's part. For much of the film, Time Limit plays almost like a dry-run for Manchurian Candidate.

But Time Limit is far more conventionally told and the final explanation for everything is far less imaginative; instead of something like a precursor to Manchurian Candidate it's more like the climax to another famous ‘50s Broadway play and film I won't name here. Actors who sometimes direct usually get above-average performances from their fellow performers but typically don't bring much in the way of visual style to the picture. That's mostly true here, though Malden was obviously hampered by a script in which 80% of the story takes place in Edwards's cramped little office. The POW scenes, shot at Conejo Ranch in Agoura, California, fare somewhat better, the location made to look quite bleak and bitterly cold. The opening scene at the camp exhibits some visual flair, but that may have been as much the work of the second unit as Malden.

"Time Limit" has a double meaning, referring to both the pressure Edwards is under to wrap up his investigation, and the conflict between the Uniform Code of Military Justice and the unreasonable demands it places on ordinary men, soldiers capable of dozens upon dozens of acts of heroism but unforgiving when they show bad judgment even once, even for humanitarian reasons. The movie gets a little preachy toward the end, but the questions it raises are interesting.

Kino's 2K remaster of Time Limit is presented in its original 1.85:1 widescreen, the image soft during dissolves and other opticals but mostly fine the rest of the time, the image sharp with decent contrast. The DTS-HD Master Audio (1.0 mono) is also okay, though neither visually nor aurally will the title tax your players or monitors/projection systems much. Optional English subtitles are provided on this Region "A" disc.

The lone extra is a trailer.

As noted above, Time Limit is worth seeing as a relic of 1950s heavy drama, and the acting is mostly very good. The film opens well, slows down for a time and then holds the audience's interest through to the end. Recommended.