Kl Studio Classics // G // April 14, 2020
List Price: $29.95 [Buy now and save at Amazon]
Review by Stuart Galbraith IV | posted May 5, 2020 | E-mail the Author
Song of Norway (1970) is a big-scale musical that, when remembered at all, is almost universally reviled. Nevertheless, I had wanted to see it for many years, if only because it was the last true 70mm movie exhibited on big Cinerama screens.

Cinerama began in 1952 as a three-camera, three-projector system that was as expensive as it was technically complex, but the results were staggering. Seen under optimal viewing conditions, it was in its way even more impressive than (true) IMAX. The early Cinerama films were all travelogues, playing in a limited number of theaters, well under one hundred screens worldwide during the 1950s. Yet despite the limited number of venues, and the fact that Cinerama theaters did just 10 shows per week with ticket prices topping out at around $3, the first five movies grossed $90 million, or around $800 million in today's dollars.

From the start there was talk of making Hollywood-type narrative films in Cinerama, including a remake of King Kong and a film of Porgy and Bess, but in the end only two were made using the original process: How the West Was Won and The Wonderful World of the Brothers Grimm (both 1962), co-productions with MGM. For various reasons the company decided to abandon the three-panel process after that in favor of 70mm releases mostly produced by other companies, filmed in processes like Todd-AO, Super Panavision and Ultra Panavision, and projected onto Cinerama's huge curved screen.

A series of flops and the changing nature of movie exhibition, a move away from long, roadshow runs at downtown movie palaces in favor of saturation bookings to multiplex theaters in the suburbs, killed the market for Cinerama-type features. A subsidiary, Cinerama Releasing Corporation (CRC), was set up to release ordinary movies in ordinary theaters, while the last 70mm Cinerama roadshows petered out. In spite of its terrible reputation, Song of Norway was nowhere near the financial disaster of movies like Star!, Hello, Dolly!, and Lost Horizon. Its modest budget was just $3.6 million yet it earned nearly $8 million, resulting in a comparatively modest loss of $1 million after factoring the costs of prints and advertising.

Krakatoa, East of Java (1969) seems to have been the last 70mm Cinerama film to receive a worldwide release in that format. Some sources suggest Song of Norway was presented in 70mm Cinerama in Canada and Britain but not in the United States. The Great Waltz (1972) was apparently shown in 70mm Cinerama in the U.K. only, but that was filmed in 35mm Panavision. 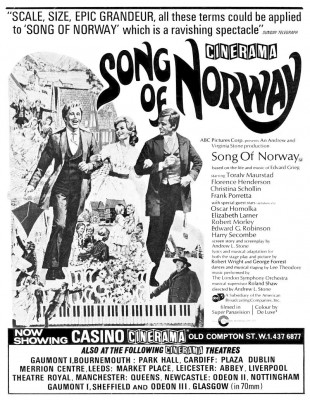 In any case, Song of Norway seems to have been the last Cinerama release to really attempt to show off the process. On big theater screens (and, to a point, on current high-def projection systems) the location photography is its best asset, and a number of scenes deliberately if faintly evoke the you-are-in-the-picture audience participation effect that made the original three-panel process so famous.

The movie is a musical biography of Norwegian composer Edvard Grieg. In the hoary tradition of such films, Grieg plays beautiful new compositions while most everyone dismisses his works as third-rate, Grieg a hack "writing music no one will listen to." Grieg (Norwegian actor Toralv Maurstad, in his only Hollywood film) finds a supporter and lover in classical pianist Therese Berg (Swedish actress Christina Schollin), who arranges Grieg to perform at her father's (Robert Morley) estate, but he sabotages the performance, ordering waiters to noisily clear tables while encouraging his stuffy guests to walk out.

One of the problems with Song of Norway is that it has a thin story to begin with, and until almost the end of the movie consists of Grieg methodically besieged by one setback after another. The movie audience knows Grieg eventually will eventually be acclaimed for his music, so it's frustrating to sit through a movie where all but his closest friends and lovers insist he's a no-good bum.

The other part of the story is a love triangle, with Grieg infatuated with Therese but unable to marry her because of her disapproving father, and devoted Nina. Grieg and Nina decide to get married, but at the altar Grieg receives a letter from Therese informing him that her father has died and therefore asking him for another shot at romance. (She unsubtly adds that "I've inherited a sizable fortune!") Later, Nina makes a great financial sacrifice, saving to buy her new husband a decent piano from sympathetic dealer Krogstad (Edward G. Robinson), but Therese beats her to the punch, buying him a much grander grand piano, hurting Nina deeply. As such, Grieg, willing to accept Therese's charity, comes off as unsympathetic, desperate though his situation may be. (He's reduced to teaching piano lessons to talentless young girls with no interest in learning.)

The movie is adapted from the popular 1944 operetta, which had an 860-performance run on Broadway and did nearly as well when it opened the following year on London's West End. However, Song of Norway must have seemed terribly old-fashioned even 50 years ago, with the rock musical Hair, the avant-garde revue Oh! Calcutta!, and Stephen Sondheim's Company exemplifying rapidly changing tastes in musical theater.

In the final analysis, Song of Norway is not good but neither is it terrible. The Super Panavision location work is quite spectacular, the film functioning better as an old-style Cinerama travelogue than as a musical. The use of historical buildings in Norway and Denmark is often striking, sights heretofore unseen in the process. Virginia L. Stone (then-wife of the film's director, Andrew L. Stone) edits this footage with much quicker cutting than usual for a Cinerama show, partly to time it with Grieg's music. The slight eccentricity of the movie blends with the more conventional material: out of nowhere there's a Brothers Grimm-influenced fantasy sequence mixing live-action and okay animation supervised by Jack Kinney.

Second unit director Yakima Canutt stages several Cinerama "thrills" that must have looked impressive on the big screen, including the very first scene: a horse-drawn buggy chase through the mountains, Grieg racing after would-be benefactor Engstrand (Oskar Homolka). Although absurd in its motivation, with Grieg practically killing the old man from whom he solicits grant money, visually it recalls Canutt's similar chase between the Stephen Boyd and Christopher Plummer characters driving chariots in The Fall of the Roman Empire (1964). The poor script then all but repeats the concept when, minutes later, characters ride hell-bent for leather aboard a runaway driverless hay wagon through a similar stretch of mountains.

Sporting an unconvincing blonde wig, Maurstad looks nothing like Grieg and other than a general likability has limited screen charisma, though the fault is the screenplay as much as his performance. In retrospect, he bears a striking resemblance to actor Bruce Davison in middle-age.

Kino's Blu-ray of Song of Norway sports a new 2K master, though it's derived from 35mm elements rather than from the original 65mm camera negative, apparent in the ‘scope ratio of the presentation, about 2.35:1. This is disappointing, but the image is very impressive for what it is, perhaps the best-looking high-def transfer from 35mm of a film shot in 65mm. The image exhibits good resolution, a steady, clean image and excellent color. There's no overture, intermission break, etc., though there is exit music at the end. The equally fine audio is offered in both DTS-HD 5.1 surround and Lossless 2.0 stereo. Optional English subtitles are provided on this Region "A" disc.

The lone supplement is an audio commentary track with Lee Gambin and John Harrison. The track is, from a technical standpoint, not recorded well while Gambin and Harrison's comments don't dig very deep into the film. Too often they digress far from the movie at hand, at one point even discussing the careers of Henderson's Brady Bunch co-stars, of all things. Pictures as minor as Song of Norway aren't likely to get another shot at a commentary track and for that reasons those providing commentaries should really be aiming for a definitive track founded on original research. This ain't it.

Though not a good movie, Song of Norway has many points of interest (the location photography, Grieg's music, Edward G. Robinson, etc.) and, on a very big monitor or, better still, projection system, visually the film is nothing if not pleasant to look at. Recommended.