Kl Studio Classics // Unrated // April 7, 2020
List Price: $24.95 [Buy now and save at Amazon]
Review by Stuart Galbraith IV | posted May 8, 2020 | E-mail the Author
An odd but enjoyable genre-fusing, Murder, He Says (1945) is a mystery-comedy with horror-fantasy elements populated by hillbilly types. The picture's main assets are its cast, especially star Fred MacMurray, its clever staging by director George Marshall, and its unusually good special effects. 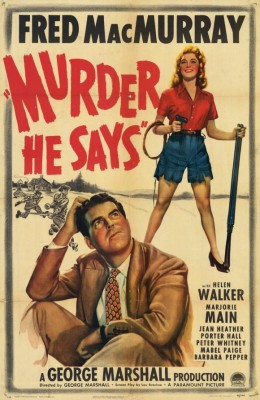 MacMurray stars as Pete Marshall, a pollster from Trotter ("Same as the Gallup Poll, only we're not in so much of a hurry," he says) replacing another pollster that went missing after visiting the Fleagles, a crazy family of killer hillbillies. Pete meets Mamie Fleagle Smithers Johnson (Marjorie Main), the matriarch, who carries a bullwhip she frequently uses; her hulking but dimwitted adult twin sons, Mert and Bert (both played by Peter Whitney); her third husband, Mr. Johnson (Porter Hall), an eccentric and menacing inventor; Elany Fleagle (Jean Heather), Mamie's dimwitted daughter; and Grandma Fleagle (Mabel Paige).

It's soon obvious to Pete that the Fleagles have not only murdered his predecessor, but have also poisoned grandma (apparently after ingesting phosphorous; she glows in the dark like the hounds Mr. Johnson apparently had experimented on first). Grandma knows the whereabouts of $70,000 in stolen loot from an earlier bank robbery committed by granddaughter Bonnie. On her deathbed the old lady gives Pete a cross-stitched sampler with musical notes and strange lyrics ("Flizon horzis, Beezin komzis, Onches nobis, Inob keezis"). The eight-note tune is identical to the later theme song for National Public Radio's All Things Considered, an odd coincidence.

The movie picks up steam once Claire Matthews (Helen Walker) turns up, she trying to clear her father, falsely implicated in the robbery, with Claire pretending to be tough-talking Bonnie. Later still the real Bonnie (Barbara Pepper) arrives, also impatiently after the stolen loot.

Based on a story by Variety film critic Jack Moffitt, Murder, He Says was adapted by Lou Breslow, who wrote both straight mysteries (Charlie Chan, Mr. Moto), comedies (My Favorite Spy) and, with very mixed results, movies mixing both genres, notably A-Haunting We Will Go (1942), one of Laurel & Hardy's worst films. However, he also directed Punch Drunks (1934), one of the Three Stooges' funniest two-reel comedies. Jack-of-all-trades director-writer and occasional actor George Marshall's career stretched from at least 1915 to a 1975 episode of Police Woman. Though he directed movies of virtually every genre, he's best remembered today for his comedies, especially for his associations with Laurel & Hardy and, later, Bob Hope. He also directed Destry Rides Again (1939) and parts of How the West Was Won (1962).

Murder, He Says is actually pretty clever, with a lot of funny dialogue, some nice comic bits - some probably worked out on-set by director Marshall - and performances. For instance, when the dying, glowing grandmother hands Pete the sampler, he says, "Pardon me," and apologetically examines it using her phosphorus glow like a reading lamp. Later in the film, in trying to figure out the meaning of the sampler, there's a strange scene where Pete asks Claire, "Do you remember the Bob Hope picture The Ghost Breakers?" (another Paramount film) and then they virtually reenact that scene from the picture.

MacMurray excelled in roles like this; he makes the preposterous effortlessly believable, probably the reason he later was cast in so many Disney slapstick fantasies, and his comic timing is peerless. Yet, his impressive range was undervalued: MacMurray appeared in both this and Billy Wilder's Double Indemnity less than a year apart, as staggering a contrast of characterizations as can be imagined.

Teaming MacMurray with Helen Walker was a wise move. Their chemistry is excellent, and her arrival in the story reenergizes the material just when it needs a boost. A fast-rising star at the time Murder, He Says was released, Walker's promising career went down in flames following a December 31, 1946 automobile accident in which Walker, possibly drunk, crashed and flipped a car she was driving with three hitchhiking soldiers aboard. One died and the other two, along with Walker, were seriously injured. Lawsuits and manslaughter charges (eventually dropped) all but destroyed her career and she died at 47, of cancer.

Murder, He Says is notable in a few unexpected ways. The split-screen photography used to get Peter Whitney's Mert and Bert together in the same shot is outstanding. Though mostly done in the usual manner, using doubles and stationary mattes, the technical quality of the matte work is equaled by the ingenious staging and editing, which is so seamless many viewers will assume twin actors play Mert and Bert. One ingenious traveling matte shot has Mert punching Bert in the face. (Or is Bert punching Mert?) Porter Hall, usually the anal, minor-authority type with a chip on their shoulder (most famously as the would-be psychiatrist in Miracle on 34th Street), has an unusual role here as Main's eccentric, deliriously murderous husband.

Barbara Pepper's appearance halfway through the film is also a bit of a surprise. A Joan Blondell-Iris Adrian type, though not glamorous she was fairly pretty at the beginning of her career. Twenty-five years later, however, when she was still only 50 years old, Pepper had transformed into something of a grotesque: bloated, bug-eyed and prematurely aged - she looked about 70. For those who know her only as gregarious Doris Ziffel on Green Acres, she'll be almost unrecognizable. Most trace Pepper's decline to the death of her husband in a motorcycle accident, which led to severe depression and a drinking problem that ruined her health.

Beyond the usual trailer, the big supplement is an audio commentary track by filmmaker/historian Michael Schlesinger and archivist Stan Taffel. In sharp contrast to Kino's lesser commentaries, where "experts" are clearly winging it using printouts from the IMDb and Wikipedia, Schlesinger and Taffel clearly know films like this one inside-out. Instead of rattling off a list of credits or padding their track with extraneous material, their chat is full of informed insight about the film industry circa the mid-1940s and, importantly, about the art of film comedy as well. It's one of the best tracks I've heard this year.

Murder, He Says isn't quite a lost classic. Halfway through I realized I had not only already seen it, about ten years earlier, but had even reviewed the earlier DVD. Looking at it again, it's still a pretty funny comedy that definitely deserves to be better-known. Highly Recommended.