Kino // Unrated // May 19, 2020
List Price: $29.95 [Buy now and save at Amazon]
Review by Stuart Galbraith IV | posted June 18, 2020 | E-mail the Author
Apparently the first postwar POW drama, The Captive Heart (1946) is generally excellent, an unusual Ealing Studios production that's a little closer in spirit to The Best Years of Our Lives than, say, The Great Escape. An ensemble film, it follows the experiences of a half-dozen or so British POWs at a German prison camp, but also the impact of their long absence back home. Basil Dearden directed this adaptation of Guy Morgan's fact-based novel, he having served in the same prison camp used for filming. 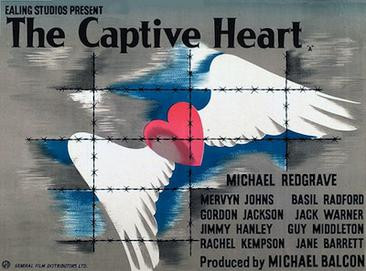 Following the disaster at Dunkirk, in June 1940 hundreds of British prisoners of the German Army are marched hundreds of miles to a prison camp in northwestern Germany. During the march, the major characters are introduced, as are their loved ones back home, via flashback.

Welshman Pte. Dai Evans (Mervyn Johns) and Cpl. Ted Horsfall (Jack Warner), are working-class owners of a small business and lifelong friends with loving, middle-aged wives (Rachel Thomas and Gladys Henson, respectively). Scotsman Lt. David Lennox (Gordon Jackson) is blinded prior to his capture, prompting him to reconsider his engagement to sweetheart Elspeth (Margot Fitzsimons). Lt. Stephen Harley (Derek Bond) is in love with Caroline (Jane Barrett) but rival Beryl (Meriel Forbes) sends him a poison pen letter, convincing him that she no longer loves him. Pte. Mathews (Jimmy Hanley) was a thief back home, but gradually reforms under C.O. Maj. Ossy Dalrymple's (Basil Radford) positive influence. And so on.

However, the most prominent story concerns Capt. Geoffrey Mitchell (Michael Redgrave). Believing he might be a German spy due to his near-fluency with the language, the other prisoners force him to admit that he isn't Mitchell at all, but rather Karel Hašek, a Czech Army soldier who had escape from Dachau. Nearly captured, he happens upon the real Mitchell's dead body, switches uniforms and identities and allows himself to be captured, a far better fate than the certain death he'd face at the infamous concentration camp.

Supported by the others, Hašek/Mitchell keep up the ruse. When a former SS officer seems to recognize him, Hašek realizes that to maintain his cover he'll have to "write home" like everyone else. Back in London, Mitchell's wife, Celia (Rachel Kempson, Redgrave's real-life spouse, and the mother of Vanessa, Lynn, etc.), is bemused by her husband's sudden eloquence and sensitivity, qualities utterly absent when she last saw him.

Covering so much ground, its many characters and a time span from shortly after their capture to eventual repatriation and the war's end, at 104 minutes The Captive Heart feels a little rushed at times, but there are many memorable moments. In particular, building romantic suspense about whether the love Hašek and Celia find in a distant relationship built on a lie can withstand the revelation that Celia's husband is long dead and that Hašek is a veritable stranger.

Jack Warner and especially the always-reliable Mervyn Johns are also very good; their bittersweet journey home, especially Warner's reunion with his gray-haired wife, is on a level with William Wyler's reunion scenes in Best Years of Our Lives. Derek Bond and prolific character actor Sam Kydd (in a minor role), along with writer Morgan, had been POWs as well, and the movie captures original little touches of authenticity absent from other POW movies. German propaganda "news," for instance, is broadcast over loudspeakers, depressing the men with stories of the Blitz. Writing home, they use authentic-looking forms that resemble folded postcards, and their Red Cross packages apparently contain all sorts of strange items, including a big horserace track game of the type found in English pubs. The use of the real Marlug und Milag Nord prison camp lends additional verisimilitude, it virtually untouched since the war, which had ended only months earlier. While the prisoners face bitterly cold winters (in a nice touch, Jack Warner sacrifices his wood-carved sailboat, a model he'd been building for months, to the stove), but also seem a little too well-fed and, occasionally, well-treated by their captors.

As noted above, the film rushes through its stories here and there, almost like a horserace itself in the final 10 minutes, but director Dearden pulls off a great directorial flourish at the very end that leaves the viewer exhilarated. Maybe it's not a masterpiece, but The Captive Heart is completely engrossing and undeniably effective.

Licensed from StudioCanal, The Captive Heart is presented in its original black-and-white and standard 1.37:1 aspect ratio. The film elements are a little worn, with a lot of age-related negative scratches at the beginning, but for the most part the picture looks well above average. The DTS-HD Master Audio (mono) soundtrack is also better than adequate, and optional English subtitles are provided for this Region "A" disc.

Supplements include a new and generally good audio commentary by film historian Samm Deighan, along with a trailer.

Kino has really been going to town recently with myriad classic British films, some quite famous, other, like The Captive Heart less well known outside of Britain. This one is quite good and Highly Recommended.