Kino // Unrated // May 5, 2020
List Price: $29.95 [Buy now and save at Amazon]
Review by Stuart Galbraith IV | posted June 29, 2020 | E-mail the Author
Though labeled a crime noir, what impresses most about Pool of London (1951) is its startlingly naturalistic progressiveness concerning race relations, including British cinema's first interracial romance, and its semi-documentary capturing of the area along the Thames between London Bridge and Limehouse, a once thriving wharfing area (the "Pool of London") abruptly ended with the rise of shipping containers and deep-water ports, and its eventual gentrification to luxury flats and shops under Thatcher, a transition famously predicted by gangster Harold Shand (Bob Hoskins) in The Long Good Friday (1980). 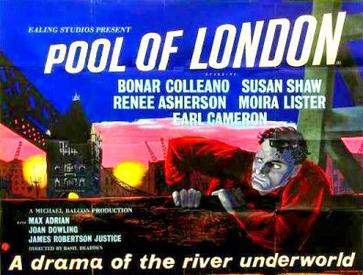 In many respects Pool of London resembles Ealing Studios' earlier It Always Rains on Sunday (1947). Both are ensemble pieces with a crime story at their center, yet equally concerned with capturing the essence of its colorful setting, populated by mostly ambivalent, working-class characters. And while the earlier film restricted its story to a single, long Sunday, Pool of London crams a lot into a single, eventful weekend.

The merchant vessel Dunbar has docked in the Pool of London, literally in the shadow of Tower Bridge. While Engine Room Officer Trotter (James Robertson Justice) prefers to spend the weekend in his cabin drinking whisky and reading The Oxford Book of English Verse (also the favored reading material of Horace Rumpole), the mostly younger crew are happy to go ashore for a little carousing. This being soon after the war, the black market still thrives, and many in the crew engage in the minor smuggling of watches, nylons, and the like.

Two of the sailors are American sailor Dan MacDonald (Bonar Colleano) and Jamaican Johnny Lambert (Earl Cameron), close friends whose stories intertwine. Dan becomes involved in a much bigger smuggling plot way over his head. Music hall acrobat Charlie Vernon (Max Adrian), in partnership with more stereotypical London villains Alf (Alfie Bass) and Mike (a very young Christopher Hewett), crack a safe and plan to use Dan as a mule for their stolen diamonds, promising him a hundred quid to sneak the jewels to Rotterdam.

Meanwhile, Johnny becomes friendly with young white woman Pat (Susan Shaw). She's clearly smitten by his thoughtfulness and gentle manner, but he's overly cautious, reluctant to even acknowledge their mutual attraction. In an especially nice touch of writing in Jack Whittingham and John Eldridge's screenplay, and in Earl Cameron's performance, Johnny picks up subtle bits of racism directed at him that Pat and the white movie audience barely notices, if at all. However, Pat gradually finds indirect ways of talking about racial issues with Johnny, while aware he feels uncomfortable talking about their blossoming romance directly. All these scenes are beautifully written and acted with a level of honestly (and an absence of self-importance) that would have been impossible in a Hollywood movie of 1951. Or even 1961.

The diamonds are successfully passed to Dan, but the thieves are soon captured and the law soon closes in on Dan. Johnny, who'd already agreed to take the package aboard the Dunbar on Dan's behalf, he having already been caught smuggling earlier by customs officer Andrews (Michael Golden) puts Dan in an unenviable position: let Johnny take the fall or face up to a potentially capital crime?

As with other recent Kino releases of early postwar British films, Pool of London propels viewers into the thick of a London lost to redevelopment and gentrification. (I first visited there in 1982, blissfully unaware so much of its postwar color was about to be overrun with Starbucks and McDonalds and ugly, utilitarian architecture.) A locations then-and-now featurette accompanying the disc shows just how much was lost and, how, even those marvelous places still surviving have been scrubbed clean of their original flavor. In one scene one can glimpse the same "Ekcovision" advertisement painting so prominent in Hue and Cry (1947).

The performances of Susan Shaw and especially Earl Cameron overshadow uniformly fine work by its great cast, many like Laurence Naismith, Ian Bannen, Leslie Philips, and Joan Dowling, in small or bit roles. So much is going on in every scene it's easy to miss all the ingenuity and cleverness: in one scene, for instance, Dan is conferring with Charlie in the latter's dressing room about the smuggling plot when a uniformed policeman bursts in. Unexpectedly, the bobby sits down and begins removing his makeup - he's an actor.

Licensed from StudioCanal, Pool of London is presented in its original black-and-white and standard 1.37:1 aspect ratio. Compared to other early postwar releases, the transfer here is a bit disappointing. The film elements are a little worn, but more problematic there's a combing issue obvious on my projection system and 10-foot screen, but perhaps not noticeable on smaller monitors. It's not ruinous but is somewhat distracting. The DTS-HD Master Audio (mono) soundtrack adequate, and optional English subtitles are provided for this Region "A" disc.

Supplements offer a delightful surprise: an interview with charming actor Earl Cameron, nearly 103 years old but fit as a fiddle and full of perceptive insight into his character and career generally. (The cast is full of actors who either died young, such as Colleano and Dowling, or lived forever, like Cameron and 96-year-old Phillips.) Also included is an excellent audio commentary by Bryan Reesman; Richard Dacre's aforementioned locations featurette; and a trailer.

A most welcome release, and a real find for American viewers for whom the film is unknown, Pool of London is a DVD Talk Collectors Series title.