Kino // PG // June 23, 2020
List Price: $24.95 [Buy now and save at Amazon]
Review by Stuart Galbraith IV | posted June 30, 2020 | E-mail the Author
A vastly underrated historical fable filmed in Todd-AO (65mm negative) at the tail end of the roadshow era, The Last Valley (1971) was a victim of bad timing when it was new and unjust neglect ever since. This is a terrible shame as The Last Valley deserves to be ranked alongside the very best historical epics. It's that good.

Its luckless home video history includes a 1999 Anchor Bay DVD in 4:3 letterboxed format, followed in 2004 by an MGM release using the same awful transfer, substandard even then. Kino's Blu-ray touts a new 2K remastering, but while it's undeniably a big upgrade from those earlier DVDs, it still falls way, way short of how the film should look and sound.

Indeed, The Last Valley is so good it's deserving of full restoration, theatrical reissue, and deluxe Blu-ray and 4K releases via Criterion, Arrow, or some similar label. That's unlikely ever to happen, but maybe over time it will build a following and, with the right people behind it and proper funding, it will finally be recognized as one of the greatest films of its kind. 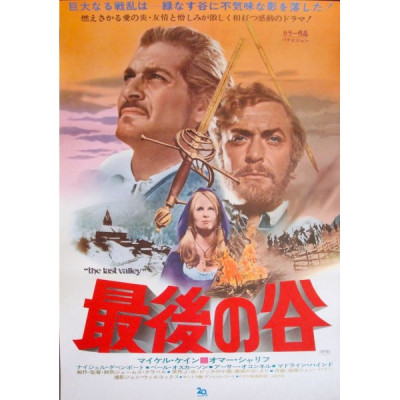 Beautifully directed by historical novelist James Clavell (who adapted it from J.B. Pick's 1959 novel), the film is set in the early 17th century, about a dozen years into the Thirty Years War. Amidst the vast devastation, starvation, and encroaching plague wanders Vogel (Omar Sharif), a former teacher who lost his entire family in the sacking of Magdeburg. He accidentally stumbles upon a remote, alpine village miraculously untouched by the war. However, the village is also discovered by a group of cutthroat mercenary soldiers led by an officer known only as The Captain (Michael Caine).

The Captain is prepared to burn the Catholic village to the ground and kill all its inhabitants, but Vogel has an idea: spare the village and winter there. The village is all but inaccessible during the harsh winter months, there's plenty of food and no sign of the plague sweeping across Europe. The Captain agrees and assumes control, making Vogel a judge and liaison between the soldiers and villagers. Despite seemingly insurmountable religious conflict and the domination of the peasantry by the soldiers, all enjoy a kind of respite from the madness of the outside world. But what to do when spring comes 'round again?

Intended as a splashy Cinerama roadshow, The Last Valley suffered the misfortune of being released just as that format of distribution (long-term limited runs, reserved seats, etc.) was on its last legs. It's hard to imagine the same family audience that flocked to The Sound of Music getting dressed up and driving downtown to see a film replete with grisly witch-burnings, threats of castration, genocide, and half-dead plague victims. (Indeed, in those early, wacky days of the MPAA, The Last Valley somehow got away with a GP/PG rating. Today it easily would get an R.) The picture is unflinching in depicting the horrors of war; particularly harrowing is the film's opening, with Vogel frantically fleeing a raided village where the populace and its livestock are brutally slaughtered. Terrified, Vogel rushes through a forest eventually stumbling upon piles of bodies, some not yet dead, victims of The Plague.

Conversely, younger, anti-establishment audiences embroiled in Kent State and Vietnam -- an audience that might have been receptive to the film's condemnation of war and religious hypocrisy -- were turned off by its marketing as a big-budget history lesson.

Though it is impressively, fleetingly epic near the climax (with superb, one-of-a-kind visual effects by Wally Veevers), The Last Valley is mostly a small-scale, intimate drama, with settings as deglamorized as Monty Python and the Holy Grail. The core of the film is the relationship between Vogel and The Captain. Sharif's ex-school teacher, the soft-spoken intellect amidst the chaos of war, moves way past his Doctor Zhivago role in myriad ways. The religious fanatics of the village see his intelligence as a threat; he offers to teach one family to read and write, but they view such skills as borderline heresy. The Last Valley provides Sharif his best film role this side of David Lean.

Similarly, Caine's atheist, pragmatic officer is one of the best roles of his long and erratic but ultimately distinguished career. He unhesitatingly kills without remorse when it is practical. (He matter-of-factly instructs those he is about to kill to "make peace with your god," before slitting their throats.) He is neither mad nor driven by emotion, yet rules the village without mercy: rape is punishable by castration, looting by blindness. He has been hardened by years of war, brutal yet simultaneously very real, very human. The film revolves around Sharif and Caine's tenuous relationship, but it's Caine's subtle performance that sticks with you.

What might have been an overly symbolic and pat anti-war film works because of the enormous intelligence and subtlety accorded its central characters. In merely trying to stay alive, Vogel shrewdly plays to The Captain's intelligence. The Captain, living among mostly barbarous, uneducated mercenaries, both Catholic and Protestant, clearly appreciates Vogel's company, wisdom while also amused by his naivety, yet keeps him at an arm's length knowing he may eventually have to kill him, along with everyone else.

The international cast includes Brazillian actress Florinda Bolkan as Caine's Satan-worshipping lover, Swede Per Oscarsson as a fanatical, ultimately sadistic Catholic priest, and American Arthur O'Connell as one of the leading villagers. A very young Brian Blessed makes a formidable presence as one of Caine's crueler soldiers. With his punk haircut and studded black leather vest, Blessed looks like he stepped off the set of The Road Warrior. Several supporting actors, including George Innes and Vladek Sheybal, would later turn up in Clavell's Shogun.

John Barry wrote the film's beautiful score. It's one of his finest works and should have won an Oscar, but went unnoticed when the picture flopped.

Shot in 65mm Todd-AO, The Last Valley should look and sound great. It doesn't. Instead of sourcing the 65mm negative, a worn, positive 35mm ‘scope print-down element was used. The print has lots of dirt, distracting wobble, splices, unstable color, light leaks, and damaged frames. The DTS-HD Master Audio is 2.0 mono, rather than derived from the 6-track discrete magnetic stereo of the 70mm version. This is another big loss as one can only imagine how much lusher John Barry's score might have sounded. But at least the audio is cleaner than the image which, though not awful, lacks even the pristine quality of the best 35mm ‘scope transfers, let alone how pristine it might look.

The 70mm version apparently was exhibited in just two theaters in the United States (at the Egyptian in Los Angeles, and the Rivoli in New York), and probably a dozen or so venues in Europe and possibly Japan. Some have speculated that the 65mm negative may no longer exist by I doubt that. More likely it's sat untouched for nearly half a century, its color slowly fading away. And, more likely, it comes down to simple economics: a proper restoration or even a simple remastering from the 65mm negative isn't worth the expense, at least in the eyes of its current owners (Disney, I believe). For the record the disc is region "A" encoded and accompanied by optional English subtitles.

Amidst all the Hello, Dolly!s and Man of La Manchas were a small handful of smaller-scale, intimate epics that deserve to be rediscovered. The Last Valley is one of the best, a moving, unusually intelligent film of the same caliber as the later films of David Lean. Given half a chance, it may someday find the audience it richly deserves. To build demand it must first be seen, so I Recommend the disc despite its gravely disappointing transfer, one far superior to all previous home video releases but equally far short of what this great film demands.