Kino // Unrated // May 26, 2020
List Price: $29.95
Review by Stuart Galbraith IV | posted July 1, 2020 | E-mail the Author
Despite its genre cliché-filled script, Taza, Son of Cochise (1954) is an immensely enjoyable Western when seen its original 3-D. Though CinemaScope had all but won the format war between widescreen and 3-D by the time it was released, Universal-International got behind the film in a big way, boasting its perfected 3-D cinematography and, indeed, it's a pleasure to see that way, though that's as much due to Douglas Sirk's excellent direction as any fine-tuning of 3-D production and exhibition methods.

The indefatigable 3-D Film Archive was responsible for this handsome release, in 2.00:1 widescreen with original theatrical prints by Technicolor. 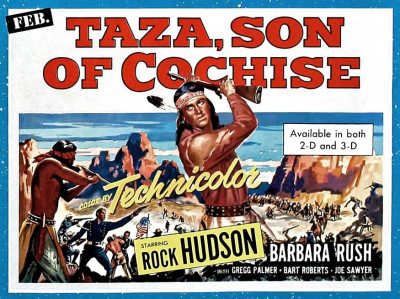 In Arizona in 1875, Chiricahua Apache chief Cochise (Jeff Chandler, Cochise in Fox's Broken Arrow and U-I's The Battle of Apache Pass, appearing here in a brief, unbilled cameo) is on his deathbed, and bestows his leadership of the tribe to eldest son Taza (Rock Hudson), adding that he wants Taza and his younger brother, Naiche (Rex Reason, billed as "Bart Roberts"), to continue his legacy of keeping the peace with the "white eyes."

Naiche, however, is anxious to join Geronimo (Ian MacDonald) and make war with the whites, forcing Taza to torture Naiche and his party after they massacre a family of settlers. Unfortunately, Indian justice doesn't satisfy Cavalry authorities, which insist they relocate to the San Carlos Reservation.

After capturing their fort, Taza, trusting honest Cavalry officer Capt. Burnett (Gregg Palmer), agrees to move the tribe to the reservation peaceably, on the condition that the Apache be allowed to police themselves, and provided with tools and seed to farm the arid land. Meantime, Taza, in love with Oona (Barbara Rush), is ready to propose marriage, but Naiche lusts after her, too, and Oona's father, Gray Eagle (Morris Ankrum) allies himself with Naiche and Geronimo.

All of this comes to a head in a climactic battle between the Cavalry and Indian warriors led by Geronimo and Naiche. When Taza rides in with his own followers, which side will he fight for?

Having recently watched Kino's Blu-ray of Douglas Sirk's Thunder on the Hill (1951), a regular 2-D movie, I was nonetheless struck by Sirk's consistently clever blocking of actors and his use of that film's hospital convent sets, all staged for depth rather than the flat, movie screen canvas. Sirk applies that same ingenuity to Taza. While there's some of the familiar ‘50s-style 3-D effects of throwing things at the camera (boulders, arrows, etc.) mostly the imaginative direction coincidentally works in tandem with the 3-D process.

Still, one could make a very boozy drinking game from the number of times the gnarled branches of a leafless trees are placed in the foreground, very effective in 3-D but comically overdone. As with Roy Ward Baker's excellent desert noir Inferno (1953), there are lots of great shots of characters on ridges, high above vast canyons. (Much of the film was shot in Arches National Park, in eastern Utah.) Taza, Son of Cochise is not a great Western but, by golly, it sure is pretty to look at.

The 3-D Film Archive's restoration is essentially flawless, and only the film's heavy use of day-for-night photography (resulting in many discernable but dark sequences) undermine slightly its visual appeal.

I was surprised to see George Zuckerman listed as the film's screenwriter. Zuckerman had co-written the superb Border Incident (1949), about the exploitation of illegal migrant workers, and later penned two of Sirk's best films, Written on the Wind (1956) and especially The Tarnished Angels (1957). Presumably, Taza was made to order, but nevertheless it presents a weak hero sublimating his tribe to the white man's ways, Taza symbolically surrendering his culture by switching to a cavalry uniform to police the white man's domination. Imagine a "Black Lives Matter" drama made in 2020 in which an African-American gang joins with the police to stamp out black protesters.

Rock Hudson, Barbara Rush, and Rex Reason don't look quite as ridiculous as Native Americans as one might imagine. Reason, wearing contacts to cover his blue eyes, visually comes off as quite intimidating, while Rush is nearly unrecognizable, far more so than, say, Debra Paget in Broken Arrow. It's also nice to see Morris Ankrum in a sizable role before he began appearing in super-cheap sci-fi pictures, while Robert Burton's General Cook seems to be channeling Jay C. Flippen, a fixture in Universal's Anthony Mann Westerns.

Kino's Blu-ray of Taza, Son of Cochise is a winner all the way. The 3-D Film Archive's work is exemplary, bringing out perfectly aligned depth with strong color reflective of original Technicolor prints, and the 2.00:1 widescreen image is properly framed throughout. (A standard 2-D version is available on the disc as well. The 3-D version includes the original intermission card, necessary because of the need for two projectors running simultaneously, left- and right-eye.) Apparently, this was always a monophonic release, but the DTS-HD Master Audio is strong and clear throughout, and optional English subtitles are provided on this region "A" encoded disc.

Supplements include an informative audio commentary with David Del Valle, C. Courtney Joiner, and 3-D expert Mike Ballew, their differing areas of expertise complimenting one another. Next is a Ballew's 20-minute video essay, full of technical information about the film's 3-D rig and the production generally, much of it presumably culled from Universal archives documents held at the USC Cinema-Television Library. The big surprise is a reconstructed 3-D trailer that really sells the film, one of the best of its kind and likewise restored by the 3-D Film Archive. Additional information and scads of great images are available on their website.

For 3-D fans, Taza, Son of Cochise is a most welcome release, a feast for the eyes. It may not be one of the great ‘50s Westerns, but I sure had a lot of fun watching it. A DVD Talk Collectors Series title.