The Criterion Collection // Unrated // June 23, 2020
List Price: $39.95 [Buy now and save at Amazon]
Review by Stuart Galbraith IV | posted July 10, 2020 | E-mail the Author
Perfectly timed given the postponed 2020 Tokyo Olympics, Criterion's stand-alone Blu-ray release of director Kon Ichikawa's Tokyo Olympiad (Tokyo orinpikku, 1965) is not just the best of the Olympic Games films, but a great film generally. Even if, like this reviewer, you have minimal interest in sports, it's enthralling from beginning to end and, in retrospect, quite moving.

The 1964 Summer Olympics marked two sea changes: it symbolized Japan's resurrection from the ashes of the Second World War into a peaceful, first-world nation, but equally significant the Games themselves were the last largely unsullied by politicization (shattered by the terrorist acts at the 1972 Games in Munich) and commercialization. The athletes are true amateurs without big corporate sponsors and the Games' message of peace and international friendship is so genuine, so hopeful, it's both exhilarating to see what once was within reach while its unfulfilled dreams of global brotherhood also leave the viewer with a profound sense of loss. The post-Olympics fate of many of the key athletes is likewise frequently heartbreaking.

The producers expected a film straightforwardly documenting the events and its winners and losers. That's not what Ichikawa delivered. In sharp contrast to the Greek god-like athletes imagined in Leni Riefensthal's Triumph of the Will (1935), Ichikawa instead emphasizes their ordinariness, a Games populated by mechanics and accountants. He's as interested in the losers as the winners, focusing on their determination, their exhaustion, their overall experience participating in the event, and in so doing greatly humanizes them. Moreover, Ichikawa gives equal time to everyone making the event possible, including one volunteer vainly trying to mop up the rain-swept track with a single sponge. 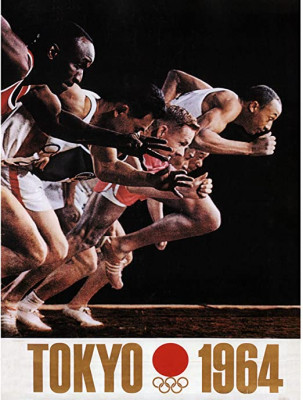 The picture opens spectacularly, with wreaking ball symbolically sweeping away the last remnants of pre-modern Japan to make way for the event. As the Olympic torch makes its way from Athens, athletes arrive from all over the world. The large, noisy contingents from the U.S. and Soviet Union dominate, but Ichikawa is more interested in athletes arriving in smaller groups from often new nations, particularly Africa. A large section of the film follows a single athlete from Chad, watching him train and eat all by himself in the bustling athlete's cafeteria.

Though not entirely free of politics - China, never mentioned once, did not participate that year, and South Africa's Apartheid policies got them banned - the opening ceremonies are quite touching, less for the heavy-hitter countries than the small ones, many participating in the Games for the first time and for the warm welcome everyone receives. Also unmentioned is the significance of runner Yoshinori Sakai, who lights the Olympic flame: he was born in Hiroshima on August 6, 1945, the day the atomic bomb was dropped. (In the film, three Japanese emperors are seen, current Showa Emperor [Hirohito] and the future Heisei and Reiwa ones.)

In the film, Ichikawa rarely uses wide angles to show us competitions in the manner of televised sporting events. In the shot put, for instance, his focus is on the almost obsessive-compulsive manner in which the athletes psych themselves up before the toss. He likes studying the faces of the competitors during the tense moments before the firing of starting pistols, and the expressions on the faces of winners and losers after the event, often in tight close-up. During the cycling event, Ichikawa at one point focuses on the roadside Japanese spectators, including old farmers straight out of Edo-period Japan, gazing at the blur of racers speeding past. In the 300-meter rifle event, he notes their solitude, at one point concentrating on a competitor eating lunch. And sounds. In the deafening silence in anticipation of the start of track events, Ichikawa notes the gentle clanging of flagpoles, of far-off, barely audible cheers from supporters.

It's almost quaint. The athletes, particularly the female gymnasts, are by today's insane standards look old and aren't as sinewy. Bits of flab jiggle amid all the muscles, and many of the athletes, men and women, lack the good looks seemingly tied nowadays to corporate sponsorship.

Though Tokyo Olympiad seems to cover every event, some are limited to mere seconds of screentime, while others are covered with dozens and dozens of camera filming them from every conceivable angle, often in slow-motion. For the marathon, Ichikawa follows Ethiopian Abebe Bikila's unwavering, steady pace to Gold, but also turns his attentions to those collapsing from exhaustion, excruciatingly grappling with their determination to finish the race while their bodies refuse to cooperate. Where Bikila and the other top contenders skip not a beat at tables set up along the course with drinks, wet sponges and the like, the stragglers down two or three cups of Bireley's Orange and slump down on the curb. Others make it to the stadium only to collapse under the weight of terrible leg cramps and feet bloodied even through their running shoes.

Criterion's Blu-ray 4K transfer sourced a mix of original camera negative and 35mm interpositive and internegative elements. Filmed in 2.35:1 CinemaScope, with some footage shot in Techniscope, the image looks superb throughout, with color vastly improved from the excellent DVD version, while exhibiting a pleasing level of film grain. It's amazing it looks as good as it does. Regrettably, the original 4-track magnetic stereo elements could not be located, but the LPCM 1.0 mono is very good for what it is, and the English subtitles are an improvement over earlier releases. Region "A" encoded.

An embarrassment of riches. The bountiful supplements, some repurposed from earlier releases (remember Criterion's $125 CAV laserdisc?) include: a new introduction by film scholar and Games expert Peter Cowie, who also provides the commentary track, recorded in 2001; three archival interviews with director Ichikawa; additional scenes, restored in 4K, running more than an hour; "A Singular Vision: Kon Ichikawa's ‘Tokyo Olympiad,'" a featurette running 30 minutes; an "About the Restoration" segment; and a booklet essay by critic James Quandt.

One of the all-time great, maybe the greatest of sports films, Tokyo Olympiad is a DVD Talk Collectors Series title.